The American is the first documented woman to travel to every country in the world – and the fastest person ever to do so.

“I have this small fear of flying,” is the last thing you’d expect to hear from 27-year-old Cassandra De Pecol, who has just completed an epic journey visiting all 196 countries in the world. The Connecticut born and raised adventurer is now the world’s first woman on record to achieve this feat as well as the fastest person in the world to do so – she did it in 18 months and 10 days, beating the existing record of three years and three months by a huge margin.

We’re all afraid to let go, of falling into a bottomless future. But maybe we belong in the air, tumbling in the wind. Maybe it’s only when you dive in that you pick up enough speed to shape the flow of reality, and choose your own course, flying not too high, and not too low, but gliding from one to the other in long playful loops. To dream big, and bounce ideas against the world and rise again. Moving so fast, you can’t tell where the dream ends and where the world begins. – John Koenig

Each day is a journey of adventure, as we endeavor to understand the problem and whom we are fighting for. – Krishan Meetoo • • • #IOnlyHaveThisOneOutfit ? #Expedition196 #EveryCountryinTheWorld #Sponsored

During the course of her 250 plus flights she took on her journey titled Expedition 196, De Pecol confirms that she has overcome her fear of flying. The travel bug first hit her hard at the age of 21, when she was a semester short of graduating with a specialisation in environmental studies. She left college, saved up $2,000 dollars over the summer from taking up a job as a lifeguard and then used that money to travel to 25 countries and work in nine of them in exchange for free room and board over the following two years.

But it wasn’t enough for her. Determined to see more of the world, once she was back home in the US, De Pecol saved up the only way she knew how at the time, by doing various babysitting jobs. She managed to save $10,000. But she knew it wasn’t enough so she reached out to private investors and small businesses to fill the void. “It was about six months before my 25th birthday that I started planning the expedition. It took a year-and-half to plan the whole thing.

While she is now a social media star, she wasn’t before her trip, yet she managed to convince investors and international hotel chains to sponsor her and give her freebies along the way. She now plans to start teaching young people the art of blagging or as she says, how to self-finance their own world trips.

“The more I traveled the more I realized that fear makes strangers of people who should be friends.” Shirley MacLaine • • • I finally mustered up the courage to leave my hotel and explore to streets of Kabul. What I found opened up my eyes to a whole new world ?❤️?? Vlog soon to come. • • • #Expedition196 #PeaceThroughTourism #EveryCountryInTheWorld #Afghanistan

Her success in getting sponsorship for her world trip may have been connected to her considered travel goals, which she adopted along the way: highlighting gender equality and climate action. “Initially I was oblivious to the fact that I was a woman pushing boundaries in the travel industry. I didn’t see it that way. But then I began realising that I can actually inspire other women of all ages to step out of their comfort zone and take that risk, to pursue a dream in a man’s world, to pursue a dream that only men have achieved.”

To that end, she has taken several speaking assignments at colleges and universities around the world. Clips from a documentary that she shot during her travels will also be shown at these talks. Besides being an expert at fundraising, De Pecol may have found her calling as a mentor or teacher during her travels. She often altered her travel itinerary just so she could meet students in some of the world’s far corners. “When I travelled to India I wanted to go to Mumbai and Delhi, but I had to go to Bangalore because I had a meeting with the students at Christ University. I’ve met and spoken with over 16,000 students in 40 countries in the course of my travels. I speak to them about youth entrepreneurship, women’s achievements, peace through tourism and responsible tourism.” 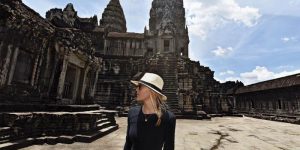 De Pecol’s journey has involved the strange and the dangerous. One of her strangest experiences was showing up in Bhutan, where she was shocked to find male genitalia painted prominently across buildings – “I soon found that it was done in order to rid the families that lived there of evil spirits.” Her most dangerous trip, she recalls was to Mogadishu, Somalia. “It was more challenging for me to get around Mogadishu than it was Syria. In Mogadishu, I had to navigate in an armoured vehicle with armed guards driving in pickup trucks behind and in front of us. I wasn’t sure if this was normal procedure or if I was getting the special treatment, but they said that this is standard procedure for any of their guests. I was in a war zone in Mogadishu.” 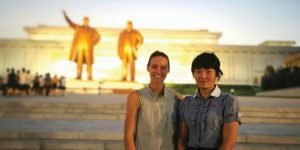 For countries like North Korea (interestingly, she says it’s where she tasted some of the best beer in the world), Turkmenistan and Syria, visas were hard to come by, but the closest US consulates often provided her with assistance. Of course, her American passport – she went through four of them during her record-breaking expedition – is the world’s third most powerful passport (according to the 2017 edition of the Passport Index, Arton Capital’s global ranking of the world’s passports) and that allowed her visa-free travel to 156 countries.

Just a few of my friends who hosted me for lunch in #Yemen. These were just half of the brothers who I dined with, the ladies don’t like to have their photos taken and I wanted to respect that, they were all so shy yet so incredibly sweet and kind. The citizens of Yemen are really, so hospitable and happy. I loved being in their company. They live so simply yet comfortably with the love of their family. Family is very important in Yemen. ❤? I’m so honored that Yemen was my last and final country of #Expedition196. The most challenging to get to but one of the most rewarding once in ??. Zero fears, zero regrets, just respect, acceptance and love ❤??

You’d imagine that De Pecol would be jaded towards the end of her journey. But as it turns out her very last country in her expedition, Yemen, the 196th on her list, turned out to give her a new perspective on the war-torn country. “In Yemen, I spent a full day there from sunrise to sunset entering from the border of Oman on a public bus with other Yemeni citizens into the city of Al-Ghaydah, about three hours inland from the border of Oman. Once there, I had meals with local families and saw how sesame oil was made traditionally but along the way there were militant checkpoints and the tragic reality of poverty and war. Children came up to me not asking for money, but for water, which made me realise the reality of what the people of Yemen are going through on a daily basis. As a woman and moreover, explorer, travelling alone in places like Yemen and Mogadishu, it was important for me to listen to the locals about where to go or how long to stay in a place. I wanted to stay the night but was advised by the people on the bus not to, for as an American woman traveling alone, it wouldn’t be safe.”

While she awaits her official Guinness World Record that is currently being evaluated, she is writing a book, planning an expedition to the North Pole, and also setting up a non-profit to further the goals of women’s achievement, promoting unity among nations, sustainability in tourism and regeneration of the environment. She’s also training to participate in the Ironman race, and using that as a platform to promote fitness through travel. 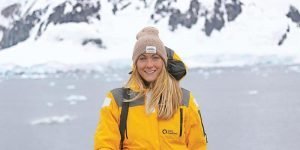 “Before this expedition, I decided to follow through with the theory of The Hero’s Journey – separation, initiation and return and step out of this ordinary life I’ve had,” says De Pecol. Not only has she become a hero for scores of young women and men around the world, she’s also already lived a life less ordinary. A true global citizen.