Banksy opens The Walled Off Hotel in the West Bank

The 10-room boutique art hotel will be open to tourists from March 20.

In the West Bank quarter of Bethlehem, British artist Banksy has pulled off a coup. Just four metres from the 30-foot high wall that Israel built to separate itself from its neighbour, he has financed and set up a 10-room hotel on the Palestinian side of the wall. In utmost secrecy, the three-storey hotel was built over a period of 14 months and is reportedly insured for $10million. As Banksy describes the hotel in a press statement, he says it is “a three-storey cure for fanaticism, with limited car parking”. 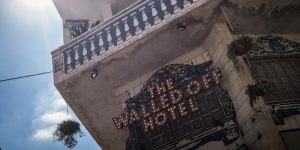 Banksy built and financed this hotel in Palestine to mark 100 years of the Balfour Declaration.

In typical Banksy fashion, the graffiti stimulates commentary and questions the status quo. Each room is designed to a different theme – all centred around the on-going conflict, of course. One room has its wall painted to resemble that of the actual barrier, while another room is modelled as an army barrack including bunk beds and footlockers. In one of bedrooms, on the wall above the head of the bed is an image of an Israeli soldier and Palestinian protestor pillow fighting. The presidential suite has a Jacuzzi that’s supplied to by a water tank riddled with bullet holes, a reference to the condition at many of the Palestinian homes in the neighbourhood. All the rooms have Wi-Fi, air conditioning, fridge, radios and a personal safe. The presidential suite additionally has a home cinema, library, and a tiki bar 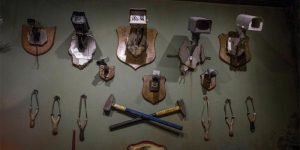 The dining room has mounted installations of security cameras, slingshots and hammers.

One of the reasons that Banksy built it is also to mark the centenary year of the Balfour Declaration signing that granted Jews a homeland in Palestine. There is a museum depicting the region’s history on the premises in the hotel. At the push of a button, you will see a statue of Arthur Balfour signing the Balfour decree. “It’s exactly one hundred years since Britain took control of Palestine and started re-arranging the furniture – with chaotic results,” said Banksy in a press release handed out at the hotel’s opening. “I don’t know why but it felt like a good time to reflect on what happens when the United Kingdom makes a huge political decision without fully comprehending the consequences,” added Banksy in a reference to Balfour and Brexit. 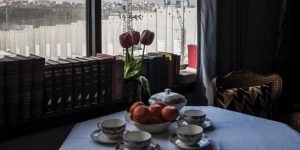 The wall that separates Israel and Palestine is adjacent to the hotel. Banksy says “It has the worst view of any hotel in the world.”

There is also a gallery in the hotel selling Palestinian art. The lobby has a David-esque bust statue, mouth covered with a handkerchief, engulfed by a cloud of smoke emitted from a tear gas canister. The dining room has cherubs hanging from the ceiling wearing oxygen masks. Alongside mounted on the wall, are protruding security cameras, hammers and slingshots. Further imagery shows an Israeli watchtower, with Palestinian children using it as a carousel to swing and play around it. The fireplace has a light emanating from under a pile of rubble.

Don’t expect a beautiful panoramic view from any of the rooms. Banksy himself says, “It has the worst view of any hotel in the world.” The rooms open out straight to sight of the wall. “Walls are hot right now, but I was into them long before Trump made it cool,” said Banksy in the statement. True, when you consider that in 2015 he entered through a smuggling tunnel and painted three works on the walls of Gaza homes destroyed by Israel. In 2007, he painted an image of a young girl frisking an Israeli soldier who was in turn pushed up against the wall. 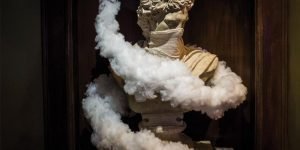 A David-esque bust statue, mouth covered with a handkerchief, engulfed by a cloud of smoke emitted from a tear gas canister.

On the opening night three day ago, Elton John performed remotely for attendees. Room rates start at $30 for the bunker-styled rooms, and will reportedly cost up to $300 for the presidential suite. Bookings can be made on the hotel’s website. This is an art hotel that will deliberately compel its guests to examine their conscience before they go to bed each night.