Bewitching Salzburg, home of Mozart and The Sound of Music, looks like a magical stage set

Everyone knows Austria is beautiful. There is Vienna, the squeaky-clean, palace-filled city of roses and dancing horses. Then there are the Alps, populated with crisp snowy peaks, Christmas trees and candy-coloured communes. There are lush fields and medieval and gothic fortresses perched picturesquely on precipices. The lakes are all mirror-perfect, rimmed by villages that appear to be made out of gingerbread and lace. But the fairest of them all is Salzburg, a fairytale kingdom above the clouds.

It is rare to find a place so immensely welcoming in winter but it is the best time to come. This is when the weather coats the city in its own sugar-white universe, making you believe you might just have to climb down a beanstalk to get back home. The streets glisten with ice and fairy lights and are scented with star anise, cinnamon and cherry strudel. The air rings with small bells on sleighs and grand ones in churches. Everywhere around are rosy cheeks, crackling bonfires and the laughter of children. Cliche? No – just magical.

The kitsch part is The Sound of Music, the pull for nearly 60 per cent of tourists to the city. Its title makes locals cringe but simultaneously fills the city’s coffers. For one of the most famous movies of all time was filmed in Salzburg and everyone wants to see the fountains where they sang Do-Re-Mi, the gazebo where Liesl dreamed of being 17 and the terrace where Captain Georg Von Trapp finally realised he was in love with a nun played by Julie Andrews.

But the melody does not stop there. The city is the birthplace of Mozart and residents revel in this rather more high brow musical legacy. Mozart’s life reads like a Shakespearean tragedy, the grimmest of fairytales – but his presence left music all over the city. At any time in Salzburg, it is possible to see his operas and concerts performed in festival halls, garden amphitheatres and dinner playhouses. Here buskers play concertos not the blues.

The streets are so consummately baroque they appear almost artificial, their pristine nature suggesting they are part of a stage set. Dainty chairs and tables are set outside for tea parties, even in the chill. Signs are painted in storyboard calligraphy over shuttered windows, gothic arches and shop windows filled with pastries and sweets fit for Hansel and Gretel. And at the end of every winding alley is a mountain, a steeple, a river, or a cart with a trader roasting chestnuts. Salzburg is so bewitching that by the time you need to leave and pass the Makartsteg bridge, seeing the padlocks that lovers leave as they do in Paris, you might think you have left your heart behind too.

Salzburg’s Unesco world heritage streets are a joy in themselves. Lanes are narrow and car-free, lined with impeccably preserved classic architecture and jammed with adorable stores selling everything from classic couture to handmade teddy bears and schlotfeger, a chocolate-coated, cream-filled pastry you simply must try. 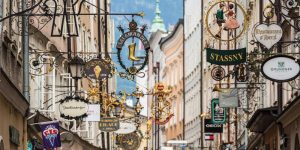 This early baroque palace is on the edge of the city and easy to get to by bus or car. In warmer months the castle is open for tours and although it closes in winter, the Advent market takes its place. Families will love the trick fountains, Leisl’s famous gazebo, the glorious gardens and at Christmas, Salzburg’s prettiest market. 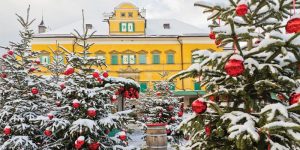 An 11th century medieval castle perched above the old town, reached by an almost vertical funicular journey over St Peter’s bulbous spires and the cobbles of Domplatz. The fortress includes regency rooms, boltholes and a 360-degree view of the surrounding area. You will also find a torture chamber, marionette museum and a seasonal Christmas market. 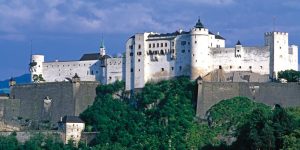 This is one place where they do dinner theatre with true class. It is set in the baroque hall of the monastery cellar of St Peter, allowing you to cross off two activities in one stroke. Do not expect standard tourist fare either – Salzburg is known as Austria’s culinary capital and won’t let you down. 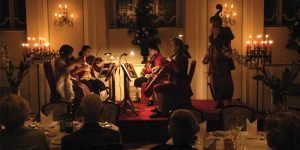 The oldest hotel in Salzburg is now a sleek art hotel, historic lines now melding seamlessly with modern. It is beautifully positioned right in the heart of the old centre.

Suites from $335 per night; www.hotel-blaue-gans-salzburg.at 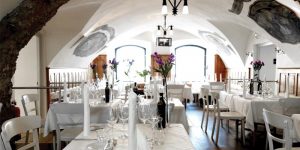 Converted into a luxury hotel three years ago, this is where you can pretend to be a problem like Maria. This is the venue used for all of the exterior Von Trapp villa shots and set beside the dreamy Leopoldskron lake, a 20-minute walk from the old town.

Suites from $325 per night; www.schloss-leopoldskron.com 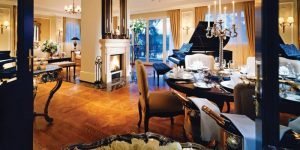 For those who like to be a little away from it all, Fuschl is a castle on a striking lake of the same name. There are golf courses, hiking and skiing very close by, plus the hotel’s marvellous health spa. Salzburg’s old town is only a 20-minute drive away.

Suites from $500 per night; www.schlossfuschlsalzburg.com 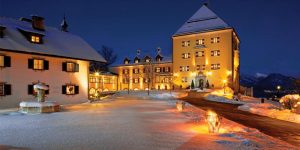