Sure you visit any one of these hip cities several times a year. But have you checked-in to any these luxury hotels yet?

Celebrity hotelier and New Yorker Ian Schrager unveiled his latest property two years ago. Schrager, the force behind many of the world’s most stylish hotels, first came to prominence with the infamous Studio 54 nightclub in the 1970s. 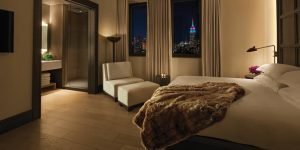 He is collaborating with the Marriott chain with the Edition hotels, which include sites in London, Istanbul and Miami beach with more to follow in China, Iceland and Hollywood. The hotel is inspired by New York’s turn-of-the-20th century private clubs, Fifth Avenue’s Gilded Age mansions and Stanford White’s architectural masterpieces. Guests are welcomed into a dark oak panelled foyer, like an upscale New York apartment building in the 1920s, anchored by a sculptured spiral staircase. The palette is neutral in shades of taupe, ivory and white and the crowd is beautiful and glamorous.

A superior room from $725 per night. See www.editionhotels.com

The multi award-winning Upper House sits among stylish and chic surrounds in the restored Pacific Place complex and Admiralty district of Hong Kong. The design is sleek, slick, modern and smart with brilliant touches of innovation, created to evoke the feeling of a private home. 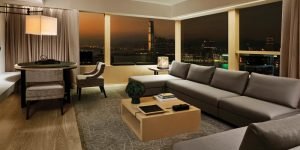 The spacious rooms have a regal air about them with the smallest at a sprawling 730sq ft (not including the fabulous expansive bathroom). The Upper House goes one step further technologically too – the whole hotel is entirely paperless. All services can be ordered via an iPod touch while check-in is done via iPad.

Rooms from $580 per night. See www.chiccollection.com

Overlooking Rio de Janeiro’s iconic Ipanema beach, which merges into its more famous but less glamorous sister Copacabana, Hotel Fasano is the first hotel in Brazil to be designed by the legendary Philippe Starck. Billed as the most fashionable address in Rio, Fasano pays homage to the golden age of bossa nova, channelling the heyday of Jobim and Gilberto. 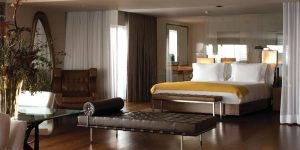 Favoured by Madonna, Coldplay, Brazilian supermodel Gisele and her NFL star husband Tom Brady, an entire wall of the hotel is devoted to handwritten notes from its celebrity guests. Distinctly Brazilian materials like Ipe flooring and the enormous piquia tree stump used for the reception desk are mixed with Grecian marble, 19th-century Argentinian brick and Chinese onyx. The guest rooms have Sergio Rodrigues furnishings and ear-shaped mirrors. The hotel’s guest-only rooftop pool offers spectacular views of Rio’s palm-lined golden beaches and surrounding mountains and is so sought after that locals book in just to enjoy sundowners on the terrace.