Russian graffiti artist Pokras Lampas is bringing the art of calligraphy to his trade.

Pokras Lampas first became fascinated with street-art as a child growing up in Korolyov, Russia, a small town outside of Moscow. He began experimenting with graffiti styles as a teenager and, soon after, was deeply influenced by the work of Niels “Shoe” Meulman, the legendary Dutch graffiti artist. Lampas has since developed his own style of graffiti art that he calls, “calligrafuturism,” a term derived from years of learning different typographical scripts and how letters can be manipulated to mirror another language. For example, his work may contain Cyrillic letters with Arabic shapes or Roman letters with Korean shapes.

To be fully versed in a language can, of course, take years. But what Lampas does is glean the essential character of each script by studying it. “When I look at the typography of a certain language, I look at the composition, what kind of shape it creates, and then what kind of rules they use to write it. Even if I can’t understand the words, I can understand how it’s done, how it’s painted, what kind of movement of hand, stroke and brush angle you need for a nice result. After that, I just try to think how I feel about it. What can I rethink? How can it be done in my own vision of these letters.”

This visual adaptation of lettering is reflective of Lampas’ personal experiences ­— the young artist was born in 1991, just as the Cold War ended, and grew up in the era of globalisation and multiculturalism. Though graffiti and street art typically contain political messages, Lampas avoids being too didactic with his work. “For me, it’s really important to communicate naturally about politics,” he explains. “I believe the art of calligraphy is to inspire people, but sometimes people shift from the artwork to the message. I like to use my art to reach new worlds.” 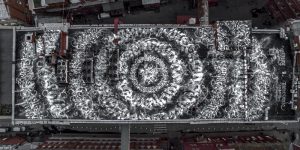 Russian graffiti artist Pokras Lampas is bringing the art of calligraphy to his trade.

His work has been met with much commercial success. Past collaborations with brands have included Ford, Panasonic, Pirelli and Mercedes-Benz, among others. He is also an official Nike International Creative Vendor since 2015. In September 2015, Lampas reached another milestone by creating the world’s largest calligraphy. The artwork, spread across a 1625 square metre rooftop of an old chocolate factory in Moscow, could be viewed from space. “It was the most unique experience I’ve ever had,” recalls Lampas. “I was not prepared to work on that large a scale. It was difficult to keep the composition, a good theme and maintain quality. It was a tough project, but I’m proud of it.” This year, he worked with Dries Van Noten on his SS17 menswear collection, adding calligraphy details to Van Noten’s patchwork denim clothing.

And though he has been able to create a name for himself, it is evident that Lampas is still very much finding his own voice. “Before this year, I used quotes from famous artists who inspired me like Salvador Dali or Van Gogh. Now I’ve tried to write my own thoughts or ideas. One of my favourite texts is to write “Never be the same…” repeating it, but each time, I write it in a new style…”

Ever evolving, next year, the artist plans to incorporate technology into his work. “I think graffiti art has a lot of potential to be performance art. You can make it move and dance with unique strokes. Virtual reality gives you the freedom to make that possible.” He will also be unveiling a piece of public art in Dubai. “Most of my projects always have a connection to the streets. I cannot say what the Dubai project is yet, but it’s going to be huge.”