As one of the first people to promote Iranian art in the Western world, how do you think the landscape for Middle Eastern art has changed since you opened your New York gallery in 1982?

At the time we opened in 1982, there was almost no interest in contemporary Iranian art and many of my shows went unsold. Several factors led to the ever increasing interest in Iranian contemporary art that we see now, including the arrival of the internet, the opening of Christie’s Middle East office, several museums beginning to include major Iranian contemporary artists in their shows and collections and major collectors leading the way through their collecting.

What was it like in the early days with such a tense relationship between Iran and the US? Did you mostly sell to Iranian expats or were there others who were also interested?

In the early days, most collectors who were buying Iranian contemporary art were expats who were supporting these artists, oil companies and art advisors and designers buying for hotels and companies in the Middle East.

With the lifting of economic sanctions in Iran, how do you think demand for the country’s art will change?

I am sure the economic sanctions have hurt many artists in Iran and have also encouraged many artists to move to the US, Europe and other countries in the Middle East to have more artistic and personal freedom. I think lifting the sanctions will have a positive effect in terms of bringing greater attention to Iranian artists and museums. As travel and commerce will be much easier, there will be so much more [art] accessible to galleries and museums. 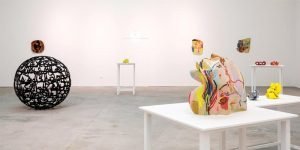 Which famous artists have you worked closely with? Who would credit you with helping foster their careers?

I have worked with many artists whose careers I feel I made an impact on personally. One such artist is Hadieh Shafie, whose work we placed in more than 15 museums around the world, including the Metropolitan Museum of Art in New York, the British Museum and Victoria and Albert Museum in London and the Los Angeles County Museum (LACMA) in California, among others. Another artist whose career I feel I have helped is the estate of Farideh Lashai, who was well known in her lifetime but her art continues to be appreciated. We have helped bring her work to more museums including LACMA, the Centre Pompidou in Paris and the British Museum, to just name a few. [There was also] a retrospective of Lashai’s work at the Tehran Museum of Contemporary Art, curated by world renowned curator Germano Celant.

What prompted the decision to open a gallery in Dubai?

I have been travelling to the region for the last 10 years to attend both Abu Dhabi Art and Art Dubai and have developed a great client base in the region. Dubai has become a major arts hub, connecting Asia, southeast Asia and Europe and the rest of the West. Many major museums, institutions and foundations are being established there in the near future as well, which will add to the city’s importance as an arts centre. We are located in Alserkal Avenue as there are so many established galleries and more to open. I love the dynamic atmosphere with so many galleries, artist and design studios.

How does the Dubai collection differ from the New York one?

In New York we represent an international group of artists, with a niche focus on artists from the Middle East, Central Asia, Turkey and southeast Asia. In Dubai, we are focusing mostly on artists who have already had major museum shows and are already in top collections around the world. We have shown side- by-side solo exhibitions of Ghada Amer and Wim Delvoye, and other artists too including Zaha Hadid, YZ Kami, Michelangelo Pistoletto, Afruz Amigi and Ross Bleckner.