The Pursuit of Philanthropy

She’s fearsomely well-connected, loves a good fight, plays baroque music to her vines and has no patience with tightfisted people

On a crisp midwinter’s day near Cape Town, veteran actor Robert Redford enjoyed a few glasses of award-winning De Morgenzon Chenin Blanc with two Jack Russell dogs on his lap. They – the wine and the dogs – belonged to his host Wendy Appelbaum, businesswomen, philanthropist and, more recently, wine farmer. She and her husband Hylton bought the farm in the prime vineyards of Stellenbosch over a decade ago. De Morgenzon Estate – Dutch for ‘the morning sun’ – is called such as the Bottleray Hills, where it catches the first the dawn rays pushing over the distant mountains.

It is also where feminist, writer and activist Gloria Steinem chose to spend her 80th birthday with her good friend before heading to Botswana to ride elephants. “She is just the most extraordinary woman in the world,” says Appelbaum. “She uses her power and influence and donates all her money to women’s causes.” She is as warm about Redford: “Just my kind of man – very down-to-earth.” It is no surprise to learn these are the kind of people with whom Appelbaum chooses to share her home and prized spare time. She does not tolerate stupidity. She has no truck with arrogance. And she cannot stand pretension. “Give me intelligent people, humble people, just real people. I haven’t got time to waste on those pretending to be what they’re not,” says this feisty, pull-no-punches powerhouse.

Appelbaum, the only daughter (she has two brothers) of Sir Donald Gordon, founder of the financial services companies Liberty Group in South Africa and what was Liberty International in the UK, is regarded as one of the richest women in Africa. It is a tag she does not carry lightly or flippantly. “With great wealth comes great responsibility,” she says. “I think the tragedy of wealth is that so many rich people do not understand they have a responsibility to society. Money can be a blessing in that one can do remarkable work for other people. But to just have wealth for the sake of wealth and material things – that is the tragedy of wealth. When you go into that little box in the ground there is nothing you can take with you. For me it is a mindless pursuit.”

Appelbaum thrives in her philanthropic role and lets it feed her passions – health, education and women’s rights. She not only spreads her net and influence far and wide – she sits on Harvard’s global advisory board and the women’s leadership board as well as being a member of the Global Philanthropists’ Circle (GPC) and many other boards and organisations.

But she also works close to home in a focused, directed manner. Farmworkers in her fertile corner of South Africa get annual free check-ups for breast cancer at a mobile clinic in De Morgenzon. Low-cost private schools established through her and her family’s organisations are helping raise the standard of education for thousands of young learners. And millions of citizens, reeling from debt, stand to benefit from this pint-sized pugilist’s love of a good fight as she took on the interest-ratcheting and debt-inducing micro-lending industry in a class-action lawsuit. “I love a fight. I’m scared of nothing,” she laughs. “We will put the crooks out of business.”

It is this determination to set right the moral compass which saw Appelbaum turn the auctioneering industry in South Africa on its head two years ago when she exposed ghost-bidding after realising she was being duped as the only bidder for a prestigious wine farm: “People lack passion and courage and I am really glad that I am passionate. I am like a dog with a bone – I will not let it go.” 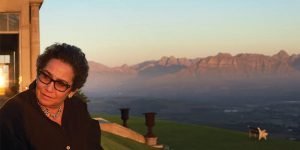 Her “real baby”, the Wits Donald Gordon medical centre, is the only post-graduate super-speciality teaching hospital in Africa. The centre was created to fill a gap when the post-apartheid government turned its focus on primary healthcare. “We started this institute of excellence – and then an interesting thing happened. Doctors who had originally been trained in South Africa and were living overseas returned home from all over the world. They wanted to give back to the community. I think we are most famous for the transplant unit, which is entirely run by doctors who have returned.” Another project which stirs her is the Gordon Institute of Business Sciences (GIBS), Africa’s leading business school in the heart of South Africa’s financial engine room, Sandton, Johannesburg. “It’s alive,” she says of the campus. “It is a true institute of learning.”

Appelbaum’s morning routine is no longer the corporate corridor in heels but the farmlands in gumboots. It feeds her inspiration and drive: “I am a million times more creative now. Living in the country is so good for the spirit.” The musical vineyards and cellars, with strategically placed speakers playing baroque music 24 hours a day, may not be peer-reviewed scientific research but the Appelbaums do not doubt the positive effects of sound energy on themselves, their vines, wines and workforce. “It’s absolutely amazing. You hear the music when you walk around and some nights I can even hear it in bed.”

And just in case one thinks her competitive edge might be dulled by the country air, Appelbaum still hones it on the golf course and by watching her racehorses strive for the finish line. Her eye does not waver from that philanthropic focus of ensuring her and her family’s legacy is one of giving to, and improving, others’ lives. For her, it is a no-brainer. “People who don’t give money away have no passion, no compassion. You cannot walk around on this planet and be part of the small group of haves and be unable to share. I think it is unconscionable.”