What happens after the devastation of a natural disaster has been cleared? Our special report from the Philippines in the wake of Typhoon Haiyan sheds light on the tireless work that continues after search and rescue teams have left

Beneath the framed, sun-bleached picture of a house was a sampler, stitched with the homily ‘God bless our home.’

Both would be unremarkable if they were not hanging on one of the few remaining walls of a  house, ravaged by the fury of super-typhoon Haiyan and surreally exposed for the world to see. The owner was below, attempting to patch up the teetering wooden structure with a hammer.

Major disasters are cruel and odd. The mundane becomes profound; the once innocuous becomes tragic, ironic or even inspiring.

The most powerful storm to have been recorded at  landfall, Typhoon Haiyan devastated parts of southeast Asia and was the deadliest storm to ever hit the Philippines. In that country alone, more than 6,100 have been killed, 1,700 people were left missing and 12,000 badly injured. 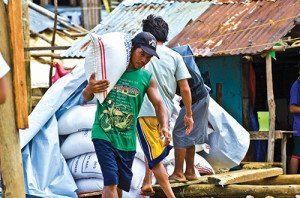 A total of 1.1 million homes were destroyed, five times that of the 2010 Haiti earthquake, and about four million people were displaced.

I saw the devastation firsthand when I was dispatched to the Philippines for a fortnight last November, shortly after the typhoon struck, as part of the global deployment team for the international children’s charity Plan.

Walk around any of the coastal towns which fell prey to Haiyan and the most likely sound you will hear now is hammering.

Fourteen million people desperately trying to nail back the pieces of their homes, their businesses, their lives. Much of the country now resembles one impromptu huge building site – mixed with the look of an enormous junkyard awash with black sludge.

Search and rescue teams have long gone, the recovered dead are buried and the typhoon quickly gone from a fickle news agenda. Meanwhile, people have to rebuild. Life must go on. Markets, businesses and schools have re-opened, some power and water is being restored but life is far from normal.

Search and rescue teams have long gone, the recovered dead are buried and the typhoon quickly gone from a fickle news agenda. Meanwhile, people have to rebuild.

The 300kmph winds and accompanying storm surge took not only buildings and lives but livelihoods.

Many people in rural areas depended upon rice crops or harvesting the coconut trees, the stumps of which now dot a Somme-like landscape.  About 15 million (one tenth) of all trees were destroyed in Eastern Samar alone.

Coconut fronds are used for roofing, husks as fuel and cleaning fluid, the flesh can be eaten or made into oil and the sap made into tuba (wine.) But the trees will take between seven to 10 years to re-grow.

“We depend most upon coconut,” says Melchor Margal, mayor of Salcedo, one of the first towns to be hit. “Coconut is the tree of life; we can get everything from it. What we will do now, I don’t know.”

It is not just the tenant farmers and landowners but those who worked in the processing plants which make this the world’s second largest coconut exporter. They will need support to find alternative work from government and aid agencies like Plan who offer cash-for-work schemes, often involved in typhoon clear-up. But longer-term solutions are needed.

The long-term impact upon children and young people is a worry too. There is the risk of a ‘lost generation’ – children whose vital education has been brutally cut-short along with around 7,000 schools damaged or destroyed. As schools are often built of concrete and on high ground, many were used as evacuation centres – and some still are. Teachers were killed or are missing and many have no functioning school or education authority to which to return. 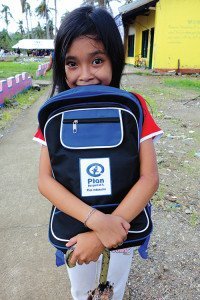 “My family’s house is okay, we’re further up inland. But my dad has no income now so I want to start working,” says Ronel. He has decided not to go back to school in January.

“I want to work as a carpenter, just like my dad. He is also building boats and teaching me how to do it.”

Ronald, 13, wants to return to school but is forced to find an income to support his grandmother, who is now his sole guardian.

“We go around looking for copper in old cables and then we sell it in the village. All the money I earn I give to my grandmother to buy food,” he says.

Post major disasters, children can become more vulnerable, at risk of being forced into hazardous labour while adolescent girls especially face the threat of being trafficked and ending up working in the sex industry.  Understandably, great strains are put upon already struggling families, leading to increases in domestic violence, substance and alcohol abuse.

It is just as well the people of the Philippines are so optimistic. One Filapina journalist recently objected to over-use of the word ‘resilient’ about her nation. “We are not jelly,” she said. But wherever you go, the openness, smiles and humour of people are the things which strike and stay with you.

A young woman called me over. She and her friend were barely visible behind the mountain of twisted metal and debris in front of what had been her house.

“Did you ever come here before? It was a really nice town with a beautiful beach,” she said sadly and then with a sweep of her hand inland – “the trouble is, now the beach is everywhere,” and laughed.

They will need to cling to this sense of humour when times get even harder.

To donate, go to www.plan-international.org/what-you-can-do/emergency-appeals/philippines-typhoon-appeal/