One chance moment in an otherwise nondescript day often holds the power to alter the path of your whole life. For Saher Shaikh, the British-born founder of Adopt-a-Camp, a charity which aims to improve the lives of the men who build Dubai, that moment came nine years ago after she moved to Dubai from Canada, where she was working in retail banking. Standing in a queue in Spinneys in Dubai Marina waiting to pay for her groceries, she noticed a labourer in front of her struggling to pay for his lunch.

It was “the tiniest bread roll and a small bottle of laban,” she recalls now. Although Shaikh, 37, did not realise it at the time, it was the catalyst that transformed her life. “I looked at my basket and then I looked at what he was trying to buy and thought: ‘It isn’t fair,’” she says. On an impulse, she spoke to him in Urdu and offered to pay for his lunch to celebrate her son’s birthday. Having been told he could have anything he wanted, all he chose was a small bottle of milk.

I am the mother and sister they do not have here and my message to them is that they are not alone, that the people of the UAE care about them very much

“It struck a chord with me. Had he taken advantage of the offer, the whole experience might have turned out differently,” she says. From that point, Shaikh started helping other labourers, who were mostly illiterate, to use the ATM at the same Spinneys and began to talk to them frequently, earning the nickname bhaji, or big sister. It is this that underpins her main mission: “I am the mother and sister they do not have here and my message to them is that they are not alone, that the people of the UAE care about them very much.”

Shaikh, who has Pakistani and Afghan roots, began visiting labourers in their camps and was humbled by the spirit of their generosity as they rushed about trying to find juice for her, remembering that she liked it. “I feel very often it is the ones with the least who give the most,” she says. With her own money, she began assembling care packages for the men using the same products her family used, including good quality shampoos and colognes. It was not until her fourth trip to the camps that she was politely informed they preferred basic talcum powder and soap. She laughs now at her own naivety. 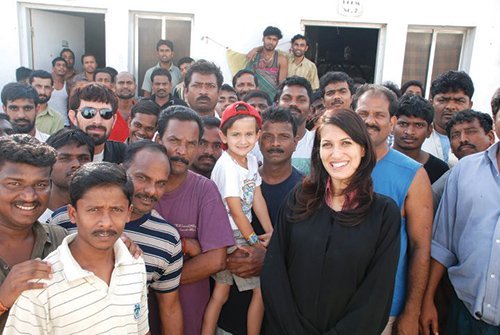 While she now has a raft of eager volunteers to help assemble thousands of care packages today in partnership with Dubai Chamber of Commerce, Adopt-a-Camp, which began as a tiny sapling in 2005, has now grown to an organisation which works in functioning camps as well as taking care of abandoned camps where employers have absconded, leaving men stripped of salaries, food, water and electricity. With assistance from the Ministry of Labour, Shaikh helps the men until they find work or return home and organises emergency appeals for donations.

Adopt-a-Camp has come a long way since that incident in a supermarket. It hosts a number of initiatives in Dubai’s labour camps under its umbrella, including English language and hygiene classes. Perhaps the one that makes the biggest difference is the scholarship fund, which helps to lift these men “out of the cycle and become real citizens” by funding their studies to gain an IELTS English language proficiency certificate. The dynamic Shaikh even enlisted the help of singer Joss Stone during her recent world tour.

The first two years were funded by Shaikh’s prize money after she won Kraft-Philadelphia’s Most Inspiring Woman in the Gulf competition. The computer hardware firm IBM now funds the scholarship programme. This year, six men are enrolled in the scholarship at the American University of Dubai with the hope of obtaining the life-changing qualification. “It’s for them to take off and fly. And they will,” Shaikh says confidently, highlighting one of its recipients, Roshan, as a case in point.

Stranded in an abandoned camp in Dubai during the financial crisis, he had lost his job as a labourer and resorted to making a living scavenging for tin to sell on the streets of Sharjah. Under the eagle-eyed guidance of Shaikh, Roshan obtained his IELTS and landed a job as supervisor for a large company with “12 people under him to boss around,” says the founder. It is just one story illuminating how a life can be changed by giving someone less fortunate a chance to change their own destiny.

So far, Adopt-a-Camp has 50 camps and 52,000 labourers under its wing and has helped an infinite number more since the initiative was born. In 2013, 10,000 volunteers took part in the Ramadan care packages programme where boxes of goods, including tea, prayer mats, noodles and soap, were assembled and delivered to 5,000 labourers. This Ramadan, as another way of bringing labourers into the community, Shaikh helped organise an iftar at Dubai’s Repton School. About 1,500 men attended, playing games and praying side by side. “We are all just human beings and it was so nice to see this humanity shine through,” Shaikh says. 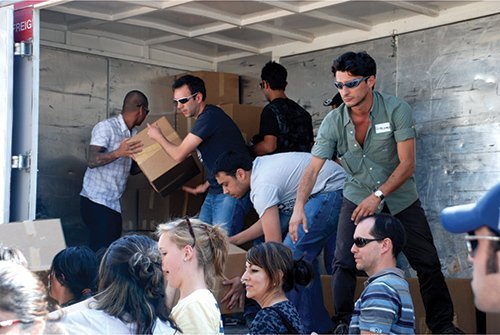 Mother to four children- Shazil, nine, Shazain, seven, Sasha, three and 10-month-old Shiraz – Shaikh is supported in her efforts by her husband Shamrez, 40, whom she describes as “the nicest guy in the world”. Her simple philosophy is if everyone reaches out to one group of people, regardless of social or economic standing, these “circles of caring” will all eventually overlap and the world could be a very different place. “I feel so strongly about it, I can’t even put it into words,” she says. It is the reason she would not expand to other countries in need like Pakistan, Afghanistan or Syria because she feels it is important to be present and hands-on in one’s own community.

Besides, with four children under 10, she already has her work cut out and at the time of the interview, the whole family was preparing for a trip that involved pit stops in London, Worcestershire, Nova Scotia, Toronto, New York, Niagara Falls and the Peak District in the UK. It is exhausting just listening to her schedule and she admits, erupting into peals of laughter, that she must be mad.

Is there one lesson that stands out after nine years? She pauses, thinking. At last she says softly, “To be grateful for what you have.”