Putting a Price on Charity

This is not your typical academic presentation. Yes, the speaker has a thesis and data to prove her point, occasionally uses jargon and cites research studies from this foundation or that university. But when Caroline Fiennes is on stage, you sit up and take note.

As the 41-year-old founder of Giving Evidence, an organisation advising donors and institutions on charitable giving, Fiennes thinks a lot about how to best make her point. She stands as close to the audience as possible; if the stage is horseshoe-shaped, she’ll stand at the bottom of the U-bend. She uses slides but if she senses you do not understand a visual, she will switch to an analogy. And if one comparison does not click, she has another.

“I became obsessed with the audience, to get my idea from my head into their head,” says the author of It Ain’t What You Give, It’s the Way That You Give It. “I am terribly keen they understand it. I use analogies so they can understand better. But some people think in pictures, others in numbers, so I use both. I’m a transmitter rather than a performer.”

Her obsession with communication extends to the written form. Her book was dubbed “the Freakonomics of the charity world — but with better cartoons” while she has contributed articles everywhere from the Financial Times to Forbes and the Guardian. What is unique about Fiennes, however, is the message she so desperately wants to convey — “some help actually hinders” — is, well, uncharitable.

“Charities have a serious problem with research quality,” she says. “The system incentivises charities to do bad research, even though it leads to wrong decisions and wasting money.”

Shortly before her book was published in 2011, Fiennes set up Giving Evidence to address the issue. The company enables NGOs, charities and foundations to conduct more rigorous research and make their findings clear. A study by the Paul Hamlyn Foundation, an independent grant-making organisation in the UK, found only 30 per cent of charitable reports contained “good data”.

If charities are not transparent enough, they lose out on large donations. Giving Evidence advises organisations from the BBC to the Association of Tennis Professionals, as well as wealthy private clients.

Fiennes, who studied physics and philosophy at Oxford, knew from an early age she would end up in the sector. She comes from a “churchy background”; her father worked in the public sector and still volunteers in the community service institution Lions Club International while her teacher mother ran a Sunday school. She has a cousin who is a priest and other family members who work in human rights and social services.

When she worked in the quantitative field of business strategy consulting at the now-defunct Monitor Company, however, she found it was not numbers she was interested in.

“I was not fascinated by money,” she says. “Why did I quit a higher-paid job to get into this sector? I was increasingly fascinated by other issues.”

The London-based organisation was set up by two former Goldman Sachs employees in 2002 to develop new ways for charities to measure their inputs and outcomes.

“Quite a number of us were physicists,” she says. “We were looking for algorithms. It had surprising data that worked differently to what you might think.”

She left New Philanthropy Capital after five years for Global Cool, a charity that promotes sustainable lifestyles. As chief executive, Fiennes was responsible for collecting evidence about its impact. 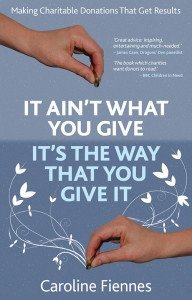 It was also at Global Cool that she put her counterintuitive thinking into action. To get people to fly less, Global Cool developed a campaign to promote train travel.

Put jokes on the stairwells and people will forgo the elevator was the message in another.

She continues to think about the other side of the equation at Giving Evidence – but she always follows hard facts. At the Emirates Foundation youth philanthropy summit in Abu Dhabi in November last year, Fiennes presented research that disproved the notion a charity should spend all its money on programmes and cut administration costs.

“Intuition tells us that non-profits are wasteful,” she says. “But we built the graph and it goes the other way. In fact, better organisations spend more on people and decent infrastructure.”

Since this was a Fiennes presentation, she went further.

“Measuring costs is bit like measuring how much chalk a teacher uses. It’s easy to measure but it does not tell you how effective the teacher is.”