It would have taken only a few drops of the polio vaccine in his mouth as a child to allow Muhammad Khaleeq to live a normal life. Khaleeq, now 35, was crippled after he contracted Polio at the age of two, a deadly consequence of the disease. Khaleeq who is a factory worker in Karachi has come to terms with his disability. “There is not much you can do about this disease once you have it,” he tells GC. Although not fatal, he admits it is “crippling.”

“I used to have regular physiotherapy sessions at a government hospital but they stopped a long time ago as my mother couldn’t afford it. With the little physiotherapy I did get in the early years, my neck, arms and right leg started functioning again.” However, after the family fell into financial hardship Khaleeq’s treatment stopped and he says he was “left to limp on one leg,” lifting his jeans to expose the brace on his left leg that biomechanically assists him to move.

The CIA’s hunt for Al-Qaeda chief Osama bin Laden using a fake hepatitis B vaccination campaign in 2010-11 bred mistrust about polio vaccines amongst the local population in Pakistan but the real damage to the immunisation campaign has been caused by misinformation about whether or not Pakistanis need to get their children vaccinated.

While the number of Polio cases in Pakistan is currently at its lowest levels for more than a decade, according to End Polio Pakistan, the fight will not stop until the disease is totally eradicated. More than a decade ago in 2005, polio cases stood at 28 a sign that the vaccination message was getting through to parents, but by 2011 the spread of the disease had significantly increased again to 198. The biggest escalation came in 2014 with a total of 306 polio cases — the highest level since 1999. Fortunately since then it’s been in decline with 54 cases last year and 13 this year thanks to effective immunisation programmes.

Even before the Bin Laden polio scandal, vaccine drops have been associated with a Western conspiracy to sterilise Muslims. Some clerics claimed that the vaccine was made from pork, a taboo for Muslims. Even more bizarre was a story circulated after the US invasion of Afghanistan in 2001 that the vaccine contained urine from then US President George W. Bush.

This was followed by deadly attacks on health workers who administered polio vaccines door-to-door in the local communities. In December 2012 alone, over 100 health workers were killed by militants despite being protected by armed police.

According to Dr Rana Safdar, head of National Emergency Operation Centre Pakistan, the government is “absolutely serious” about polio eradication. “We know that this is the way forward.” Dr Safdar accepts past security failings that resulted in polio workers being attacked nationwide but she’s adamant that these attacks have been reduced, thanks to the backing of the country’s Prime Minister Nawaz Sharif and the national task force. 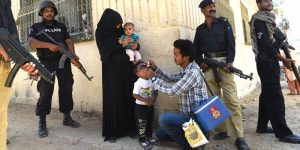 Moreover, the military operation which started in the North Waziristan region of Pakistan in 2014, led to destruction of militant hideouts as well as freeing the population in that area from them. Polio vaccinators now have access to this region and are able to vaccinate large numbers of children, which is a huge step forward from when thousands of thousands lived without polio inoculation.

Today, the disease remains endemic in neighbouring Pakistan and Afghanistan, down from over 125 countries in 1988, according to the World Health Organization. Nigeria was removed from the list of polio-endemic countries in September 2015. In Pakistan, the virus still exists in Karachi, Quetta, FATA and Khyber Pakhtunkhwa regions.

“The movement between these two countries [Pakistan and Afghanistan] is so much that the virus is difficult to control,” says Aziz Memon, chairman of Rotary International’s PolioPlus campaign in Pakistan. Memon believes that the key to unlocking this deadly disease is in inoculating those children who previously missed out when they were younger. He says, “The inflow and outflow enables high chances of children getting away without being vaccinated.”

In 1988, the forty-first World Health Assembly adopted a resolution for the worldwide eradication of polio. It marked the launch of the Global Polio Eradication Initiative (GPEI), spearheaded by national governments, WHO, Rotary International, the US Centers for Disease Control and Prevention (CDC), UNICEF, and supported by key partners including the Bill and Melinda Gates Foundation. Since the GPEI was launched, the number of cases has fallen by over 90 per cent, which is why only Pakistan and Afghanistan remain polio-endemic. Cases have fallen dramatically since polio eradication programmes were introduced, from 350,000 globally in 1988 to around 60 in 2015.

In May this year, for the first time in Pakistan’s history, environmental samples for polio tested negative. A sample is considered positive if the polio virus is found in sewerage water, which is the basic parameter to determine if anti-polio campaigns have been working. But for Memon who is wearing a red-colored badge that reads End Polio, the results still fall short of their ultimate goal. “The high-transmission seasons are from June till September. So what if the samples tested negative? We have to aim at making Pakistan polio free.”

Memon believes illiteracy also plays a huge factor in determining the success of immunisation programmes. “In the FATA region, female illiteracy is high but if mothers were educated on the other hand, they would ensure that the health programme required for her child from birth to nine months is completed.”

To combat further misconceptions about polio, Memon helped create the Rotary Ulema (religious scholars) group, which educates religious leaders at a grass roots level about polio vaccines in the hope that they will spread the message among the local communities. “We tell people about the number of Muslim countries which are polio free. We invite religious leaders from all over the world to sign declarations that say that there is nothing wrong with the vaccines.” Memon explains.

While Memon and the Gates Foundation have been on the edge of eradicating polio for some time now, the last hurdle for the public health campaign lies in changing the vaccine, a process known as The Switch. Since April this year, the oral vaccine, which was designed over 60 years ago, will be changed to an injected vaccine.

However, the switch does not come without risks. There are three strains of polioviruses. The new vaccine will not have a component that protects against Type 2. For the most part, that’s not a problem — Type 2 polioviruses haven’t been seen since 1999 and have been declared eradicated and Type 3, according to Memon has also been eradicated for almost four years ago, but is awaiting certification by the WHO.

“We are fighting against Type 1, and we have begun an important switch shifting from trivalent oral-polio-vaccine (OPV) to bivalent OPV,” he explained. The 155 countries that had been using OPV were expected to make the vaccine switch this year and if the planners’ assumptions are correct and the switch is executed as intended, the world’s children will be safer and campaigners will end polio in the near future.