Philanthropy at the Price of a Coffee

Giving as little as $1 can change the world, says media and telecoms magnate Tariq Qureishy.

Like many wealthy, successful philanthropists, it was a series of seismic events in Tariq Qureishy’s life that stopped him in his tracks on his career-driven path and made him reflect on the legacy he wanted to leave behind.

The first was his father Mumtaz, a former army colonel, being diagnosed with bowel cancer, a disease which eventually killed him at 84 after a six-year battle.

The second was the sudden death at 42 of his sister Uzma Husain, who fell sick and died overnight from a mystery illness while visiting Qureishy in Dubai.

The knock-on effect for the rest of the family was tremendous, with one sister unable to cope and Qureishy’s mother Ayesha, now 79, left bereft.

Qureishy himself, the founder and chief executive of Vantage Holdings, a marketing and consultancy firm for media and telecoms businesses, found himself piling on weight and struggling to be the family anchor he once was. 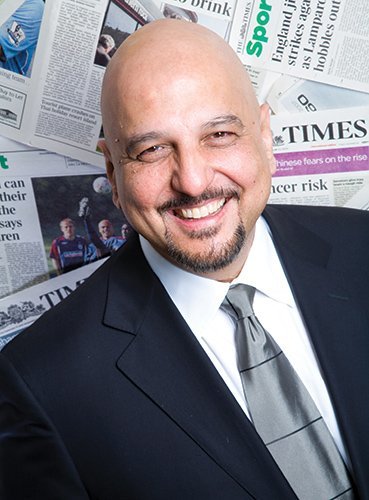 “I was close to rock bottom,” he says. “It was a big personal tragedy and when that happened, a lot of things changed in my life.”

But if the saying that out of tragedy comes good has any truth, it galvanised Qureishy, 50, into action to launch a not-for-profit social enterprise. Called 100%Mad – which stands for making a difference while the 100 per cent refers to every cent raised going directly to charity rather than being absorbed in administration costs – it aims to help the disadvantaged around the world by encouraging micro donations of a dollar via a mobile phone app or text message.

The businessman is applying all the entrepreneurial skills he has learned during a lengthy career, which includes launching The Times newspaper in the Middle East as its publisher and holding the regional sales contract for Bloomberg TV and multimedia, to his foundling idea of tapping into a youth demographic for the campaign to raise money.

“We are starting a youth movement,” he says at his office in Dubai’s Media City, where the glass walls are covered with his frantic scribbles in marker pen as he jots down ideas.

“We needed to find a way to target a group that feels disenfranchised. A dollar is a cup of coffee, a small amount you don’t think about.

“If you have to think about the money you are donating, it is too high.”

Qureishy, who studied economics and accountancy, has set his sights on raising $1 billion. And if that seems preposterous for a new charitable venture, one has only to think of the fact there are six billion active mobile phone users in the world.

If only one sixth were to donate $1 each, he would hit his target.

Pakistani-born Qureishy himself admits there is donation fatigue, particularly among the older generation, and is tapping into the youth market because they are media savvy and he believes they want to be part of the conversation.

And if he likes to think big, it is because the executive is a devotee of leadership courses, which encourage participants to aim high and – rather surprisingly for a driven career man – takes a holistic approach to his enterprises.

He starts the day with a “power hour” of meditation, inspirational videos and exercise.

And his ideas for charitable schemes have stemmed as a result of courses he embarked on at the time of his personal crises.

During one in 1998, while working as regional director for Dow Jones Markets, he was sent on a month-long programme in Philadelphia, where participants were asked to write their epitaph.

“It was boot camp,” he says. “We were on our knees. We were doing well in our lives and the last thing we worried about was death.

“I got stuck. I thought, I am super successful in a more traditional sense heading a massive region and why am I not satisfied? That was where I had my epiphany of wanting to serve and give back.”

That sense of wanting to do more came back to haunt him when he visited Pakistan in 2001 to help doctor friends treating children with cancer and realised signing cheques was not enough. When his father was diagnosed with cancer shortly afterward, he moved to Dubai to be closer to him and launched his mobile phone consultancy, i2i Group.

If you have to think about the money you are donating, it is too high.

That sowed the seeds for his idea to use phones to donate to charity but the first incarnation in 2003, called Mobile Aid Development, failed to attract many donors. With less than one billion mobile phone users at the time, it did not hit the $100,000 mark and was put on the back burner when stricter charity regulations were introduced in the UAE.

It did, however, give him his acronym for his latest initiative.

“I don’t see problems, I see things to create a solution around,” says Qureishy.

“I just changed the business model.”

He enlisted the support of high-profile patrons such as mind-mapping expert and author Tony Buzan, Chicken Soup for the Soul co-author Jack Canfield – whose leadership course Qureishy attended in 2012 after his sister’s death – and Deepak Chopra.

The executive is also in talks with Google and Facebook about targeting their users to increase donations.

His enterprise will be launched in September with initial funds going to Charity: Water, One Drop, Water.org and the Global Citizen Foundation (global-citizen.org)

A year later, he hopes to organise a series of concerts around the world with top-ranking stars.

Qureishy, who eventually hopes to hand over to a chief executive under 30, plans to eliminate any administration costs through selling merchandise, ticketed events and crowdfunding sites like Indiegogo.

He says business skills like his are vital to philanthropy: “The future of philanthropy is entrepreneurship.

“You need business skills to raise $1 billion without spending a penny. This engages every ounce of my being.”