Uncovering the inspiring story of award-winning actress, executive producer and director, philanthropist, entrepreneur, activist, and Global Citizen Forum 2021 Awardee – Eva Longoria, and her fierce commitment to empowering a better world, both on and off screen. By Teresa Esmezyan

Known for her polished roles on TV’s biggest hit shows, from Beverly Hills 90210, The Young and the Restless, and Desperate Housewives Eva Longoria’s true influence on the global scene translates to something much bigger than Hollywood. Catapulting to enormous fame through a series of opportunities on the big screen, as well as behind the scenes as an executive director and producer, Longoria has broken many barriers of success for women around the world.

Amongst the very few who have unlocked the power of producing their own content as the best way to effect change, Eva started her own production company, UnbeliEVAble Entertainment, where she aims to give more opportunities to women and people of colour behind the camera.

“We’re building a pipeline of talent outside the well that so many productions companies are contented to tap,” » she says in a Forbes interview. “The only way that innovation happens is through diversity. The only way you can break through a crowded space, with so many options, is by tapping into resources and a talent pool that hasn’t been tapped.”

As the 2021 GCF Award recipient, Eva Longoria joins the Global Citizen Forum for their Annual Summit in Ras Al Khaimah – her mere presence an emblem of the powerful role global citizenship plays as a catalyst for change. Nominated by GCF Board of Advisors, the Global Citizen Forum Award is presented to individuals or organisations with outstanding and consistent contribution to the movement of global citizenship and are selected based on demonstrated results and sustainability of their work.

While most celebrities avoid a divisive topic like immigration, Longoria takes on a more admirable approach. In addition to being a vocal advocate of migrant workers, serving as a co-chair of President Obama’s re-election campaign, and speaking at the 2012 Democratic convention, Eva is also the executive producer of The Harvest – a documentary focused on the 500,000 child migrant farm workers in the U.S. and promoted awareness and support to enact the Children’s Act for Responsible Employment.

“I’m a firm believer in the potential of global citizenship as a catalyst for change. In order to create a better world for future generations, we need to start seeing the world through a global lens and tap into the power of human talent, education and innovation, all of which are indiscriminate to race, culture, religion, or nationality, ” Longoria shares with Global Citizen.

For 2022, Longoria is wrapping up an inspiring film about the man who created Flamin’ Hot Cheetos; the son of immigrants with a fourth-grade education, who started as janitor at FritoLay and eventually became an executive at PepsiCo, FritoLay’s parent company.

Longoria herself is no American newcomer she grew up in Corpus Christi, Texas, as one of four girls in a ninth- generation Mexican American family. According to research done by Harvard professor Henry Louis Gates Jr. for the PBS series “Faces of America, ” the Longoria family’s roots in this country “run back to a time before Texas even existed.

Her philanthropic sense of duty was formed early on through the volunteer services received by Longoria’s older, special-needs sister. “Organisations like the Girls and Boys Club put volunteerism at the core of my early life, ” she says in a Los Angeles Times interview. “I was doing charity work in school. It’s part of my family’s DNA,” she shares.

Eva is the founder of the Padres Contra el Cancer, which operates as a non-profit organisation that aids Latino children with cancer and offers support for their families, as well as Eva’s Heroes, an organisation that offers developmentally challenged
youth enhanced support opportunities.

“I come from humble beginnings in south Texas and from a very young age my parents taught me that giving back to the community was just a part of life. Today I am honored to have a platform with more resources and supporters to highlight and make a significant impact on the issues that are close to my heart, ” Longoria shares in a personal letter through the Eva Longoria Foundation, which brings people together to empower women, specifically Latinas – to reach their full potential.

With a focus on the transformational power of education and entrepreneurship, Longoria hopes to not only to have a positive impact on the community but also to shape the national conversation about how to support the growing Latina population and to raise the visibility of women of color are bucking trends and changing the narrative.

“Ultimately, we want the Latina story to be one of academic and career success, equal representation, appropriate recognition and economic mobility,” Longoria writes in the letter.

In addition to her work as an actress, a director, a producer, and a philanthropist, Longoria is a spokesperson for L’Oréal Paris and a co-founder of Casa del Sol tequila. 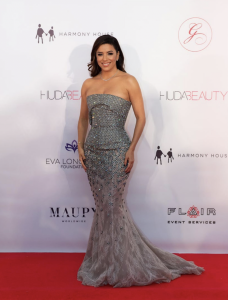 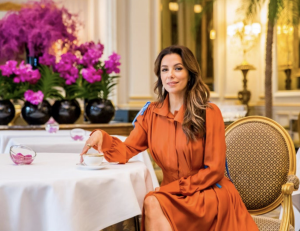