Celebrities from Kate Moss and Eva Longoria to Sharon Stone and Elton John all parted with a pair.

You’d imagine that in a room full of wealthy celebrities, mention the words ‘refugee crisis’ and you’ll have an enthusiastic, unanimous show of hands raised high to support the cause. But you’d be wrong. What has now become one of the biggest migrations of people since WW2 over the last 24 months has also wrought consternation not only among the refugees, but also from the host country as well as the public figures who are called on to comment on the polarising issue. 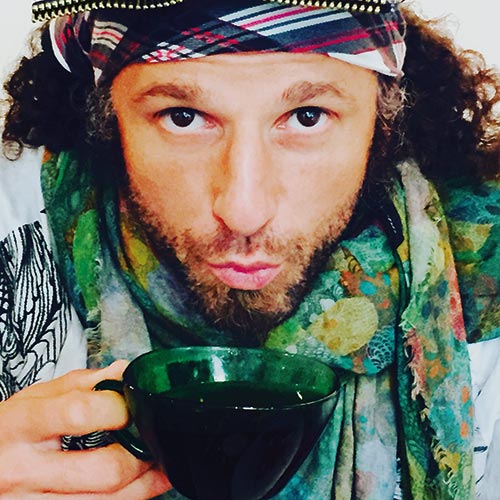 No one is more aware of that than 38-year-old artist-cum- fashion-designer Johny Dar. Earlier this year he initiated Jeans for Refugees, a fundraising project to get 100 celebrities to contribute one pair of jeans each. He would then paint them and auction them online with the money going to help refugees. The first task though was to get 100 celebrities to part with a pair of jeans. “I contacted a lot of people I knew personally and the scary thing is that those people initially turned their backs on the project. I can understand why they said no – I don’t justify it, but I understand. It takes bravery. People really need to realise that these celebrities aren’t just giving their jeans, they’re giving their name, they’re giving their support,” he explained.

Dar studied fashion in LA in the late 90s and soon after launched his first fashion label Johny Wonder in 1999. It wasn’t long before he broke into the top-tier fashion circuits of New York, London and Berlin. His calling card since has become body art and to this end he has not only published the first of a six-volume book exploring the subject titled Dar The Book, but teamed up with A-list photographer Rankin to create the limited-edition calendar titled Tuuli by Dar. He also collaborated with Lady Gaga on her video G.U.Y three years ago.

Jeans for Refugees is Dar’s most ambitious project yet – artistically as well as on a personal front. “I believe that the refugee crisis has political and religious background – there’s a lot of tension in this matter beyond just the obvious human suffering. Before I even entered the project I definitely had many reasons to say no. I live in Germany so the refugee matter is quite present in the media. I recall the image of the Syrian boy [Alan Kurdi] who was found drowned on one of the Turkish beaches and that image just tipped it for me. I thought to myself, ‘When do you say enough?’ ” 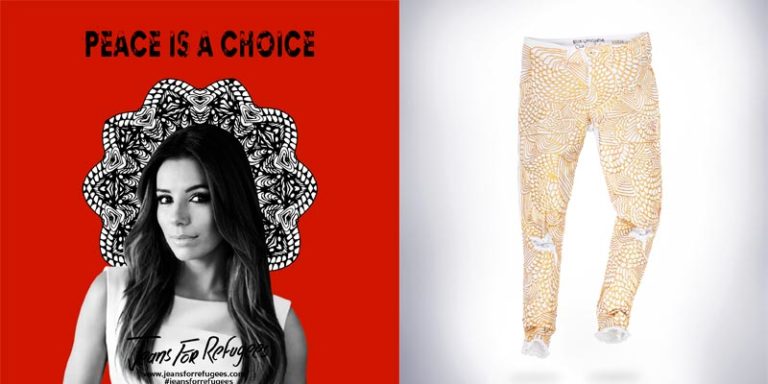 The roll call of those that signed onto the Jeans for Refugees project was impressive. Kate Moss, Elton John, Emma Watson, Pink, Sharon Stone, Victoria Beckham, Harry Styles and Usher, among dozens of others. But then there were those that chose not to. “A really dear friend of mine, a pop star, said ‘Oh at the moment I don’t have any jeans.’ And I was like, ‘Hold on a second, the last time I checked, you had four trailers of clothing, and you don’t have a pair of jeans to spare?’ One other really big singer apparently had only three pairs of jeans, so we were told that we had to wait until at least one of his jeans gets old. The responses would just want to make you cry.”

Initially, Dar hadn’t planned on painting the jeans himself. “The original idea was quite different. It was to go to three refugee camps and have the refugees participate in the painting process. But it didn’t end up taking this direction,” says Dar. Instead, he hand painted them and tried to bring a little bit of each celebrity’s personality onto their jeans. “The theme was to get a sense of the celebrity’s art of either singing, or acting or directing documented as art on their jeans. On the Kate Moss jeans you can see the movement of moss going up and building on forms and surfaces that are tough to exist on – like her personality. She’s dynamic and able to reinvent her presence in the media.” Her jeans eventually hammered at $7,159 in the online auction. 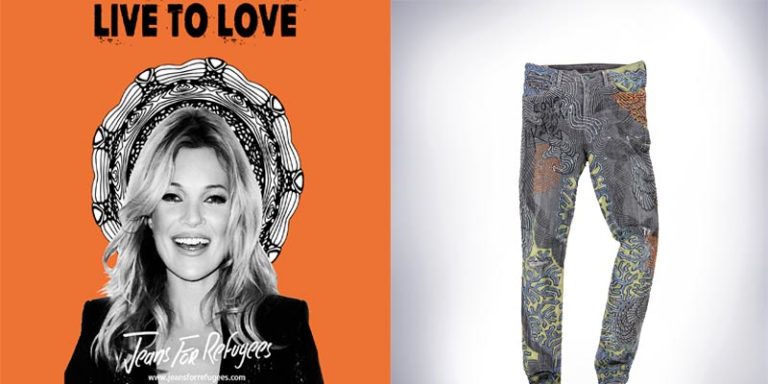 However, before the jeans went to auction online last month, Dar held fashion shows in New York and Berlin, as well as exhibited them at the Saatchi Gallery in London in a bid to draw up more support for his online campaign. He also volunteered at the notorious jungle refugee camp in Calais just before French authorities demolished it.

By the time the online auction came to end on October 30th, the 100 jeans notched up a cumulative total of $352,000. However, it wasn’t Moss’s jeans that racked up the top donation, it was instead a coat donated by Her Highness Sheikha Jawaher Bint Mohammad Al Qasimi of Sharjah – the official patron of the project – that sold for just over $122,000. The profits from the entire auction were donated to the International Rescue Committee (IRC).

Dar is now toying with the idea of building on the momentum that the Jeans for Refugees project has drummed up as he has the support of the Big Heart Foundation, which was launched by Her Highness Shaikha Jawaher Bint Mohammad Al Qasimi.“We can create jobs for poor women and single mothers where they’re making pieces of clothing that can be sold around the world in support of their situation,” he said.

Through his Jeans for Refugees project, Dar might have unintentionally shown the world on which side of the divide many of the world’s most famous people stand, igniting a social commentary that’s larger than the money raised. The self-deprecating man sees it differently. He says, “I’m not this billion dollar company. I’m just an artist that’s wild and free who wants to see this world as a happy place.”