Each 17.5 square metre shelter is shipped in two flat-pack boxes and can be assembled in four hours.

Recently, Ikea were in the news for providing jobs to refugees in its European factories, besides conducting programmes to help them to integrate into the community. In November last year, its store in Slependen, Norway, even displayed a replica of a 25 square metre dilapidated Syrian home to encourage shoppers to donate towards the cause. 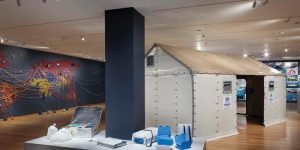 The Ikea refugee shelter is part of the permanent collection at the Museum of Modern Art in New York.

Ikea’s non-profit Ikea Foundation along with the UNHCR went one step further and used its expertise in construction to actually build an affordable 17.5-square metre shelter that comes neatly shipped in two flat-pack boxes weighing a total of 169kgs. A hallmark of Ikea design is its unfussy assembly process and this shelter is no different. It takes just four people a total of four hours to assemble the 68 components this using tools no more complex than an Allen key.

Each shelter can accommodate a family of five, and has a window, ventilation as well as an all-important solar panel linked to an LED light and a phone charger. The plastic used in its construction is designed to last for three years and is recyclable. 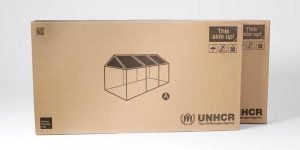 Each unit it units are shipped in two flat-pack boxes weighing a total of 169kgs.

According to a report in The Guardian, Per Heggenes, CEO of IKEA Foundation says, “It’s almost like playing with Lego. You can put it together in different ways to make small clinics or temporary schools. A family could also take it apart and take it with them, using the shelter as a framework around which to build with local materials.”

The robust construction offer a degree of protection against the elements and security that are far greater than that afforded by emergency tents. The functional units were designed aesthetically enough to secure a spot as a permanent exhibition piece at New York’s Museum of Modern Art too. Earlier this month, the shelter also won the prestigious Beazley Design of the Year 2016 award conferred by London’s Design Museum.

The first shelter, part of what was called a Better Shelter Programme, was constructed back in 2015. Since then, over 16,000 have been shipped to places including Lesbos in Greece, Nepal, Yemen, Djibouti and Iraq. There are several more thousand of these shelters that are ready to be deployed worldwide.

IKEA’s project is a moment where private businesses are indeed showing that profit motives and the desire to raise the level of the collctive conscience towards humanitarian causes need not necessarily belong to two mutually exclusive Venn diagrams.