Having already given away $28 billion, Bill Gates intends to eradicate polio, with the same drive he brought to Microsoft.
William Henry “Bill” Gates is a rich man. His estimated wealth, some $65 billion, equals the annual GDP of Ecuador, and maybe a bit more than that of Croatia. By this rather crude criterion, the founder of Microsoft is worth two Kenyas, three Trinidads and a dozen or so Montenegros. Not bad for a university dropout.

Gates is also mortal, although some of his admirers may find that hard to believe, and as they say, there are no pockets in shrouds. So he is now engaged in the process of ridding himself of all that money in the hope of extending the lives of others less fortunate than himself.

“I’m certainly well taken care of in terms of food and clothes,” he says, redundantly. “Money has no utility to me beyond a certain point. Its utility is entirely in building an organisation and getting the resources out to the poorest in the world.”

That “certain point” is set a little higher than for the rest of us – Gates owns a lakeside estate in Washington State worth about $150 million and boasts a swimming pool equipped with an underwater music system – but one gets the point. Being rich, even on the cosmic scale attained by Bill Gates, is no guarantee of an enduring place in history. The projection of the personal computer into daily life should do the trick for him, but even at the age of 57, he is a restless man and wants something more. The “more” is the eradication of a disease that has blighted untold numbers of lives: polio. 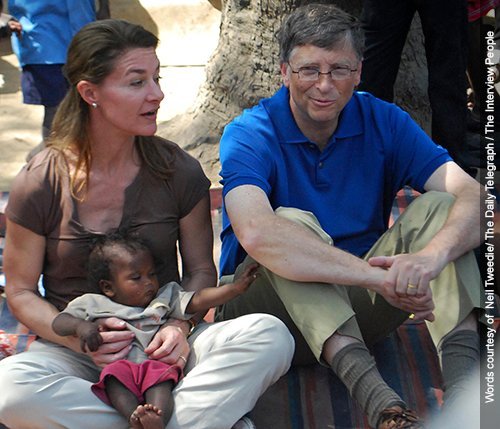 Later this month, Gates will deliver the BBC’s Dimbleby Lecture, taking as his theme the value of the young human being. Every child, he will say, has the right to a healthy and productive life, and he will explain how technology and innovation can help towards the attainment of that still–distant goal. Gates has put his money where his mouth is. He and his wife Melinda have so far given away $28 billion via their charitable foundation, more than $8 billion of it to improve global health.

My wife and I had a long dialogue about how we were going to take the wealth that we’re lucky enough to have and give it back in a way that’s most impactful to the world.

“My wife and I had a long dialogue about how we were going to take the wealth that we’re lucky enough to have and give it back in a way that’s most impactful to the world,” he says. “Both of us worked at Microsoft and saw that if you take innovation and smart people, the ability to measure what’s working, that you can pull together some pretty dramatic things.