From Hollywood to Hell

It was a transformative phone call. If Scott Neeson was at a crossroads before the call, he wasn’t by the end of it. The actor, enraged by the food served to him on a private jet, made it easy for Neeson with his indignant anger and his refrain that his ‘life wasn’t meant to be this difficult’.

If Neeson had not been so tired, he might have told him where life was really difficult. But what that pivotal conversation did reveal was where his heart lay: in a rubbish dump on the outskirts of Phnom Penh in Cambodia.

Neeson’s journey to Steung Meanchey as the executive director of the Cambodian Children’s Fund had begun months earlier – and worlds apart – at his home in Brentwood, Los Angeles, where the view was of the Santa Monica mountains and his next door neighbour Cindy Crawford would occasionally pop by for a chat. As president of marketing at 20th Century Fox, he enjoyed the perks of Hollywood life: “There was a Porsche in the driveway, first class travel, a nice house, a motor yacht and gorgeous girlfriends.”

It was a good life and was about to get better. There was a new job about to start with Sony Pictures where there would be more money, more responsibility and more power. “I’d negotiated myself a terrific deal,” says Neeson.

But first, there were six weeks to fill, so he booked a holiday. It was to be a hiatus from the world of films – a time for reflection and adventure. The plan was to visit various Buddhist sites in the East, starting in Bangkok and ending up in Rishikesh, north India. Scottish-Australian Neeson set off with a backpack – although he still travelled first class and stayed in luxury hotels.

On the way to Angkor Wat, Neeson stopped at Phnom Penh, hungry for more of a backpacker experience. The children on street corners begging for coins appeared too savvy and he wanted to see the real Cambodia, where life was lived on a knife-edge: “Take me somewhere so gut-wrenchingly awful and it will remain with me forever.”

It was a man in a cafe who gave him the name Steung Meanchey, scrawled on a scrap of paper. ‘If you want to see people who really need help, go there,’ he told Neeson.

It was a “voyeuristic, insensitive” Neeson who took a cab to the outskirts of the city, not sure what he would see or find. The cab driver was incredulous, telling him it was a rubbish dump and there were better places to visit.

Neeson was undeterred and after a breakfast spread at the luxurious Raffles hotel, he went in search of adventure.

He got it in spades. He would later describe the scene as ‘apocalyptic’: the dark foul smoke, the stench, the corpses and the hypodermic needles, the sheer magnitude of putrid, rotting material, and the children – hundreds of them – crawling over it like ants, competing with thousands of birds for a tin can, a piece of plastic, a scrap of food. Something, anything, that could be sold, eaten or recycled.

Neeson was appalled. His desire to do something was overwhelming. “A child was walking past – I couldn’t tell whether it was a boy or a girl as they were so wrapped up in rags – and through a translator, I learnt her name was Srey Nic. She lived on the dump, had never been to school and her job was to find money to support her family. That night I met Nic and her mother and we reached an agreement where for $30 a month, she would leave the garbage dump, go to school and the family would all live in a house.”

It was a good feeling to change a life so quickly, all for the price of a burger and beer in West Hollywood. The rest of the holiday never happened. Neeson stayed in Phnom Penh, returning to the dump every day and changing the life of another family. 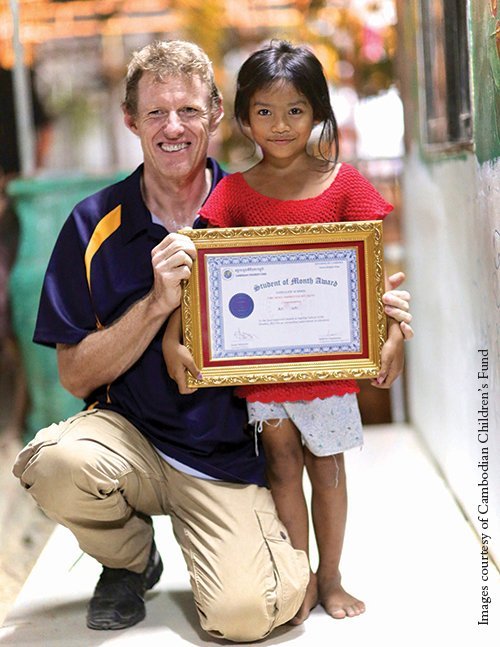 When he returned to LA, he was a different man, convinced he had found his calling but “I’d seen some terrific mid-life crises go down in Hollywood so I didn’t want to do anything rash”. It was a calling that the management at Sony could have done without. Whenever he had the opportunity, Neeson returned to Cambodia. In that first year at Sony, he made 11 trips to Steung Meanchey, each time taking on more children.

It was on one of these trips that Neeson received that fateful phone call. “I was on the dump with three young children. They had typhoid and they were going to die. I didn’t know what to do, or who to call. You can’t call 999. There are no police, no ambulances.” As his mind kept spinning, his cell phone rang. It was the actor in Tokyo, where he was promoting a film, conferenced in with his agent in Los Angeles. “He was furious because he had requested certain amenities for the flight back to LA. We had put the wrong amenities on the plane and he was refusing to get on it. He said to me, ‘Scott, my life wasn’t meant to be this difficult.’”

It was a defining moment for Neeson, a “beautiful moment of vindication” that Steung Meanchey was where he was meant to be.

When he returned to LA, he sold everything: his car, his house, the boat, his belongings – “I was shocked by the amount of stuff I had” – and moved to Phnom Penh. Ten years later, he is still there. The charity he founded, the Cambodian Children’s Fund, now has more than 1,800 children in its care and offers education, healthcare, food and shelter to those living on top of and around the dump.

Neeson’s impact on these children and their families has been profound. He is unsure how long he will remain in Cambodia but of one thing he is certain. Being a big shot in Hollywood never brought him as much happiness as working out of a rubbish dump in the slums of Phnom Penh.