The illustrations of Syrian refugees by young British war artist George Butler tell a poignant tale, one that is being told at supper clubs across London in a bid to raise money for the Hands Up Foundation

We are used to seeing journalists, cameramen and photographers sheltering from fire as they report on stories in the troubled parts of the Middle East – Syria, Iraq, Afghanistan – flak jackets secure and helmets in place.

For 29-year-old artist George Butler, however, there is another side to the violence and danger we have come to associate with these troubled countries – and another way to report on it.

Butler is an unlikely war correspondent. Blond, gentle, rather plummy and unthreatening, he is an illustrator for whom the quiet moments are just as telling as the explosions of battle – something he discovered when visiting Afghanistan as a guest of the British Army, thanks to a well-placed uncle.

“Because it was an unofficial post, I was drawing in the camps and on the odd patrol and that’s what the British troops were doing there 90 per cent of the time,” he says.

“The film crews and photographers were of course trying to get the action in Helmand Province and on the front line. And the life that we now know is so important in the camps – between soldiers, and how they keep themselves busy and keep in contact with home – that was overlooked.”

For Butler, while photography is the perfect medium for action and accurate reporting (though of course filters, cropping and even Photoshop make it less reliable than it once was), illustration offers something else: interpretation and empathy.

“It’s when there’s another layer that’s not as obvious as photography and film. I think that is when drawing becomes so effective. It is a very personal experience and the artist, like the photographer, should really be offering some opinion of their own. You are trying to describe your experience of what is in front of you; you are not trying to make a photographic record.”

In 2012, Butler was in Turkey, hoping to illustrate the arrival of refugees from Syria, but found little to draw from the plain white minibuses that brought them into the country. He got chatting to a man who helped him enter Syria, where he met members of the Free Syrian Army, who were keen to tell their story. The first picture he painted in the town of Azaz was of children playing on a burnt-out tank. 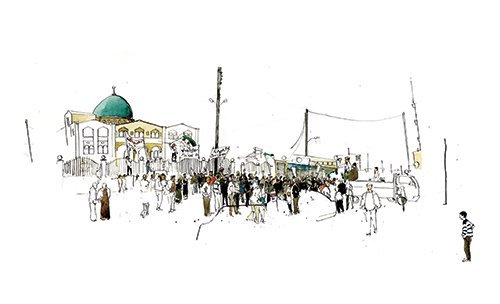 “You walk in through an old minefield, meet the Free Syrian Army, past a blown-up petrol station and through the town and then you come to this battle scene from 10 days before. I just sat down on a bank and started drawing,” he says.

“The kids carried on playing and it was one of those moments, recording exactly what I set out to record, which is this little town after the fighting had stopped. Little did they know the shelling would start again in seven days’ time. It was just a scene of people coming back and looking at these extraordinary monsters in the middle of their village and now children were playing on top of them.”

His attempts to evoke these events have proven surprisingly popular with newspapers, helping to revive the art of reportage illustration and raising money to help Syria’s broken population survive and recover from the horrors inflicted on them over the last three years since the uprising in 2011. His sense of the resilience of the country’s people prompted him on his return to join the team at the Syrian Supper Club, set up by three friends in 2012 to hold regular dinners to raise funds for the growing humanitarian crisis in Syria.

The Supper Club’s work has gone further now with the establishment of the Hands Up Foundation, a charity that will see its official launch in London in November. It has a simple remit – to provide funding for small but essential projects with direct transparency to the charity’s trustees, ensuring no money disappears, finds its way to the wrong people or is simply frittered away in administration.

The project we’re most proud of is the medical salaries, which really ticks all our boxes in that you are helping a huge number of people and keeping the expertise in Syria…It is a cliche but you are actually saving lives

“We quickly realised we couldn’t compete with the UN or Medecins Sans Frontieres or the International Rescue Committee or the Medecins du Monde and we should just do specific projects helping a small number of vulnerable people inside Syria,” says Butler. “That meant allocating, say, $16,500 to bags of flour at the start when bread was in shortage or paying for an X-ray machine in Aleppo.”

Those may seem like mere drops in an ocean of misery but the knock-on effect for the population is significant and the results quantifiable – an essential part of the deal Hands Up does with its beneficiaries.

“The project we’re most proud of is the medical salaries, which really ticks all our boxes in that you are helping a huge number of people and keeping the expertise in Syria, if and when we can rebuild it,” says Butler. ‘We are paying for two doctors, three nurses and two porters who are in charge of running an operating theatre inside Aleppo. In exchange, we get quarterly pay slips, lists of people they’ve treated – what was wrong with them, where they are from – and we then pass that on to the donors to say, you gave us $500 last month, that pays for this doctor to do a month’s work and he treated 600 people. It is a cliche but you are actually saving lives.”

The Syrian Supper Club events involve a Syrian feast at someone’s home, for which each attendee pays between $55 and $80 (or more should they choose to), with all funds going to the charity. The crowd at the first auction the group ran, which raised just under $100,000, ranged from Syrian expats in Britain, Foreign Office civil servants and BBC journalists, including veteran BBC correspondent Lyse Doucet, to private donors who preferred anonymity. The Syrian educational charity, the Asfari Foundation, has also supported the events. 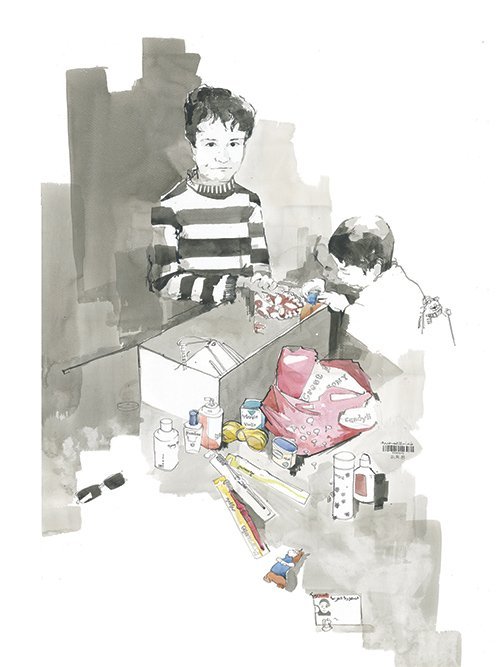 For the founders, it is a big job undertaken not for money but for love of the country and there are immense decisions to be made. “We are trying not to spread ourselves too thinly at the moment,’ says Butler. “To give you an example, the project we’d like to do at the moment is to provide prosthetic limbs. You can buy a prosthetic limb for $100, or you can get one for $5,000 and have rehab for a child till the age of 18, and it is a difficult decision to make: do you treat one person properly, so their life is revolutionised, or do you put 50 people back on their feet for a year and then they will need a new limb? We will probably fall somewhere between the two.”