GC speaks to Maria Conceicao, the founder of an organisation supporting the education of Bangladeshi children and their families, about her constant battle against donor fatigue

Since quitting her job with Emirates airline in 2005, 31-year-old Maria Conceicao has been living in the UAE working on fundraising for her eponymous Maria Cristina Foundation (MCF) and travelling when needed to support her projects in Dhaka in Bangladesh.

But she says all that will change if the current donor fatigue in the UAE continues. She says “only a small percentage of people in the UAE are the giving type”, which is putting the future of her organisation in jeopardy.

How do you measure the achievements of MCF since its inception nine years ago?

The community now understands the value of education and begs us to send their kids to school. I used to have to force them or give financial incentives to let their children go to school so this is great to see. It is a whole new mentality towards education and long-term thinking, instead of just thinking about how much money or food they have today. We also have adults’ educational programmes, where we eventually place them in gainful employment in Gulf countries and we have seen great success. Not only do they support their families comfortably but many put back into the community. One has even opened a small school in his village.

How many children to date have come from Dhaka to live with host families in the UAE and receive an education?

We have five children currently studying in Dubai. They are all doing well and hopefully will start applying for universities soon. They will be at a level to compete worldwide for an international career so I have great hopes for them. We are not currently extending these programmes in the UAE as there are currently some visa issues for all Bangladeshis but in the future, if possible, we would prefer to bring whole families rather than put the children with foster families. 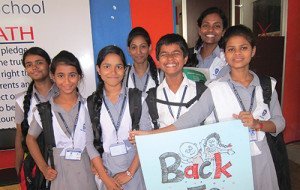 Between visa bans, red tape and changing attitudes on the ground, what are the biggest obstacles you have encountered?

Some of these obstacles need a lot of patience. It took us a long time to change people’s attitudes towards education but we have succeeded. With the current visa ban in the UAE, we just have to wait. However the one obstacle we have to face daily is poverty. These families have such difficult times, wrought with sickness, death, disabilities and many daily hardships that you cannot even imagine without seeing it firsthand. When they face such difficulties, sending their kids to school is the last thing on their minds. They just want to survive.

The UAE contributes millions to international charities annually but you have said when you knocked on doors here you found “only lip service”. Do you think a lot of people have donor fatigue, not just here but in the western world?

There is definitely a case of donor fatigue in the UAE. If there are billions going to international charities then it is likely the donors are seeking glory by donating to a well-known charity or a fashionable cause. This is fine as it means money is going to charity. However, I think you have to question the social impact per dollar with these big organisations. With my foundation, we do not have overheads so every cent goes to the beneficiaries and we can show the direct benefits with proof of progress reports. Believe it or not, I have been told before that we are too small to support. The donors that we do have really do care about the cause and they are good people and companies to deal with. I just wish we had more.

Should a new model of philanthropy be adopted in that case to change attitudes to giving?

Already consumers are expecting more and more from corporations and will switch products to a company that supports a cause. I think this mentality is likely to increase so the way forward for charities may be to seek more corporate partnerships rather than just rely on individuals. The problem for charities is that there are more and more needy causes and so many charities that it is hard to get noticed.

Do you believe the key to ending the poverty cycle is by inspiring entrepreneurs rather than providing donations?

The key to ending the poverty cycle is by enabling the families to support themselves. You cannot expect to train somebody for a month for them to go and run a successful business. The women we have taught some skills have been able to make enough money for food but they are still in poverty. Our real success in adult education has come from teaching adults for one or more years so that they are able to find employment overseas. That way they can earn at least 30 times the amount they would earn working in Dhaka. A father and son from this programme recently bought an apartment in a decent area of Dhaka. It is great to hear this sort of news.

What is MCF in need of the most right now?

Money, or to be specific, school funds. We have partnerships with three schools in Dhaka.  Although they give us very good rates, we still have a lot of bills to pay.

You trekked to the North Pole in 2011/12. What is your next big fundraising effort?

I have a new marathon challenge in February  – seven marathons on seven continents in seven consecutive days – although it is possible there will be something before then. What I would really like is for more people to take on challenges such as I do or create fundraising events to raise money for MCF because just me is not enough and I am really struggling.