Together with her husband Microsoft founder Bill Gates, Melinda Gates has given away $30 billion since the turn of the millennium, making them America’s most generous philanthropists. Now the couple are calling for a movement of global citizens to create real change

When I am in the developing world, my heart absolutely breaks at times,” Melinda Gates tells me. “I’ve gone back to my hotel room sobbing.”

Every tale of suffering, though, is fuel for her charitable mission. “You say, ‘How can I make a difference in this person’s life and everybody around them?’” Gates has the perfect mix of traits for philanthropy. She is pragmatic yet idealistic; almost robotically efficient yet utterly humane. She is poise personified — calm-voiced and straight-backed with a perfect manicure, yet there’s a hint of fallibility: her mascara is slightly smudged.

We meet in her office at the Bill & Melinda Gates Foundation, a glass cathedral to do-gooding in Seattle. She and her husband, Microsoft founder Bill, used to be the richest couple in the world. But through their foundation — which aims to eradicate polio, stamp out malaria and fight Ebola — they have given away $30 billion since 2000.

Every year they write a letter setting out their development agenda. This year’s — published today — is markedly upbeat. “In the next 15 years, poor people’s lives are going to improve more than they have in the history of the Earth,” she tells me. “There are four levers in this: health through childhood deaths being down through vaccines, agriculture, education and mobile phones.”

Gates’s personal cause is empowering women, though. “They are the ones making decisions about children’s health. If we don’t include women [in development], we lose by half.”

In 2012 she gave her backing and funding to family planning. A Roman Catholic, she “wrestled with this for a long time” but was persuaded after meeting woman after woman in villages and slums who said, ‘I have five children — I can’t have another — I can’t feed these five.’ “When you hear those cries, you say, ‘I need to take leadership’. I believe in contraceptives. I use them.”

The Gates Foundation is a family affair: their children — Jennifer, Rory and Phoebe, aged 18, 15 and 12 — sometimes accompany them on trips,“I want them to be global citizens, to understand responsibility.” 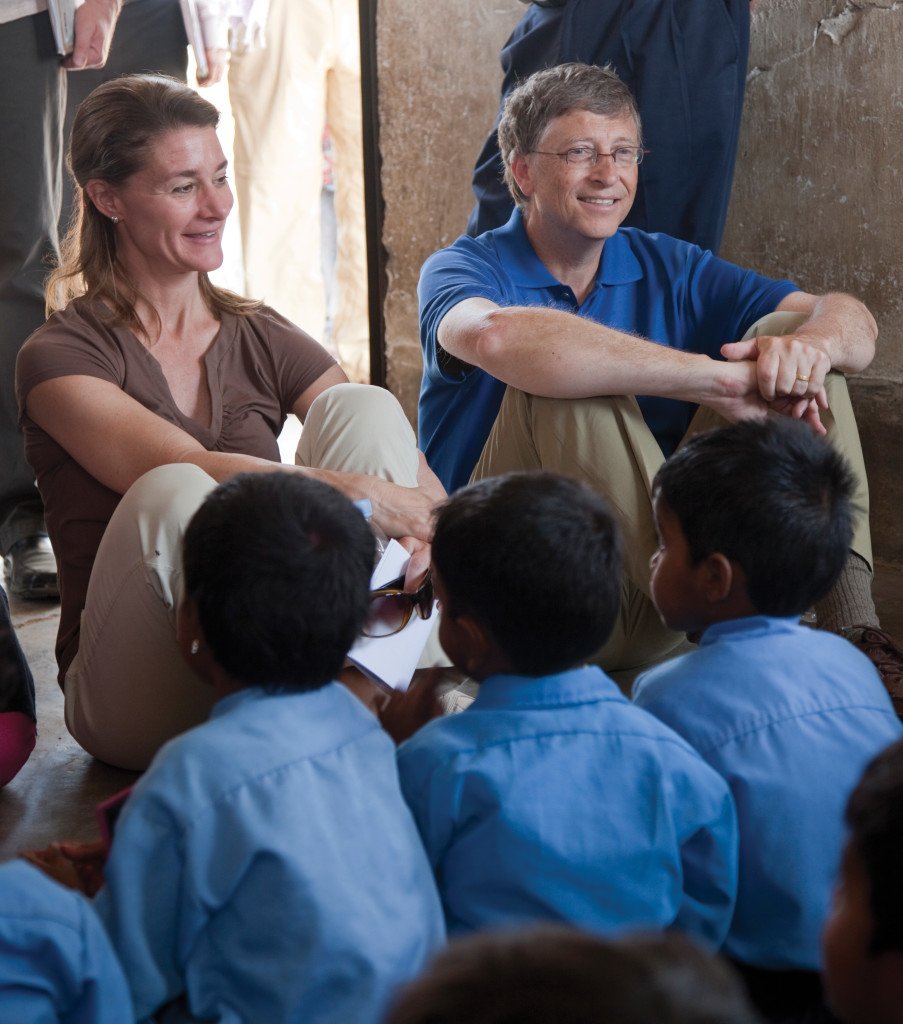 This is part of the couple’s broader campaign. Their letter calls for a movement of global citizens. “We can create change if we all say we are going to improve the lives of the poor.”

Gates’s own commitment to helping others started young. She adopted the motto “serviam” from the Ursuline nuns who taught her at school, volunteering in her Dallas community. Now she and her husband spur each other on. “Bill and I talk constantly about the foundation at home, at dinner, just the two of us, out with friends.”

She describes their skills as “super-complementary”. “We sometimes tackle problems from a different point of view,” she explains. “Bill will often come with a scientific focus, I will come with a humanistic focus.”

That reflects a difference in personalities. Melinda is socially astute and warm, all eye contact and smiles, whereas Bill is famously awkward. So much so that the day before we meet, their daughter Phoebe asked her mother: “How is it that you gave Dad even a chance because he was kinda geeky?” Melinda replied that this was down to another man, a fellow computer science student called David, a good friend with whom she studied at Duke University. “[David] was very geeky but had an amazing tender heart so I gave [Bill] a chance because I thought that might be there too — and it was.”

Gates had been one of very few female students doing computer science. “From first semester freshman to sophomore, the drop-out was huge for women. I got used to working around men.”

This helped when she joined Microsoft, where she helped develop Encarta and Publisher, before leaving to have children. “Microsoft was very male-dominated — but that’s what I had been used to in school.”

She believes paternal support is key to getting girls into the sciences. “Dads have to say, ‘You can be good at science and math’.” Her own father was an engineer who worked on the Apollo mission. At a company picnic he introduced her to a colleague, a female mathematician. “He was always trying to get her on his team, so I went: ‘Oh, women can be good at math’ [too].”

In secondary school he bought Gates a computer so she could programme at home. It was an Apple 3. Apple products are now banned chez Gates. I thumb the iPhone in my pocket nervously and quickly move on to asking if it would help girls to have more role models.

“Absolutely,” she nods. “But we need to see more women of all types at the top. Right now we see women of a few styles. Boys see men of three dozen different styles.”

She also believes men are more inclined to help other men. “Lots of men sponsor men and say, ‘You are ready to put your name in the hat’. We need women to do that for women — and men too. Men have to say, ‘I am going to leave the interview loop open until I have qualified male and female [candidates]’.”

I ask about the ultimate glass ceiling: would she like to see a woman in the Oval Office? “Some day, absolutely. A female president would be fantastic. I hope it happens in my lifetime.”

So, Hillary for 2016? Gates smiles. “I don’t take a political view. We work with whoever comes in.”

The Gates’ are keen on collaboration and theirs is an enviable contacts book. Bono is a friend (“he’s highly energetic”), and the previous weekend was spent with the investor Warren Buffett. “He’s fun to talk to because he has this big economic view but then he can talk to my kids about what interests them.”

Buffett partly inspired the Gates’s plan to give away their fortune rather than hand it to their offspring, although the couple had never been big believers in inherited wealth. “Bill wouldn’t have been able to create Microsoft if he’d been born in Liberia. We benefit from where we grow up so these resources should go back into society.”

Any would-be Paris Hiltons among the billionaire set may have the Gateses to blame for a depleted future shopping fund. They have persuaded 127 of the world’s richest to give away at least half of their fortunes. How did they win recruits? “It was sitting down with them over meals to talk about what is possible in philanthropy, how it can take risks where a government can’t. You can take on eight vaccine candidates knowing only one will [work] and think of it like a venture capital portfolio fund.”

The couple are evangelistic about philanthropy. “We think this is something [other billionaires] would enjoy as much as we do. If you’ve got billions of dollars you probably don’t need all of it. A lot of them have it in the back of their mind that they might do it but they don’t know how.”

The Gateses gather this group of billionaires together annually so they can learn from one another. I ask if it is a strange juxtaposition to go from cocktail parties with plutocrats to villages in the developing world. “I don’t go to many cocktail parties — I don’t have time. The real juxtaposition is sitting with families with no clean water, then coming back to my nice life where I have seat-warmers in my car.”

That “nice life”, she assures me, is “pretty normal” — despite the fortune. “We do a lot of things with the kids, like going to the movies. And there’s homework — helping with math.”

How do the Gateses balance the needs of the foundation and their family? “We’re like any working parents. It’s a constant juggle. We spend a lot of time looking at calendars. ”

Her minimal “me” time is spent kayaking, hiking and meditating. As a family they like to party. Gates turned 50 in August and flew out to Austria with 18 relatives for a Sound of Music-themed do. “We wore lederhosen and dirndls.”

Even Bill? “Yep. All the men wore lederhosen.” She smirks. “A few didn’t want to but they had to fall in line.”

I ask if the milestone changed her perspective. “When you turn 50 you see the end of your life and how much time you have left. I have hopefully 25 great working years ahead of me. We have a goal for 120 million women to have access to contraceptives by 2020.”

What, then, would she like her legacy to be? She looks me dead in the eye. “That I made a difference for women and children in the world.”