Evie Evangelou is a New York-based entrepreneur and philanthropist who has roped in famous faces like  Victoria Beckham and Donna Karan to further the cause.

“Fashion has a loud voice,” says Evie Evangelou, explaining the idea behind Fashion 4 Development. “We’re about using it with fashionable people that the public look up to.” Those people include Victoria Beckham and Donna Karan. They are the two honorary ambassadors alongside model Lily Cole and HRH Crown Princess Mette-Marit of Norway.

Evangelou is president and founder of F4D, an organisation that aims to channel the fashion and beauty industries to further sustainable development issues like ethical sourcing in the developing world. She founded F4D in 2011 after doing a series of spontaneous interviews at the UN General Assembly in which she interviewed designers about what they were doing to help the Millennium Development Goals.

She has a long association with the UN going back to her 20s when she was just starting out as an entrepreneur fresh from the Fashion Institute of Technology and New York University. During her work with the UN she was at one point an adviser to former Secretary General Kofi Annan, but ultimately quit. “I came in very sort of visionary – ‘Oh we can change the world’ – but then when I really saw what humanity does, I was shocked and appalled and had to take a step back to rethink.

“I love the UN because without it we’d be in big trouble. People don’t understand what they do but there are so many things they do and mitigate so many issues…but for me the bureaucracy and certain things I encountered with certain countries – I walked in thinking I was going to save the world, but I felt like my shoulders were beginning to crumble,” says Evangelou.

F4D, which has the slogan: ‘Giving back is the new luxury’, hosts an annual First Ladies Luncheon at the Pierre Hotel in Manhattan during the United Nations General Assembly. The regular guest of honour is the First Lady of the UN, Madam Ban Soon-Taek. Chris Collins, the face of Polo Ralph Lauren, is the founder of their League of Gentlemen, which also honours men at their annual luncheon.

Another big event is the Leading Ladies Luncheon where celebrities and diplomats mix to promote the Global Fund to Fight AIDS, tuberculosis and malaria. F4D and the UN have worked together to reach the Millennium Development Goals by getting beauty and fashion leaders to commit to more ethical ways of doing business.

Over the summer Evangelou hosted an event at the UN where celebrity chef Chloe Coscarelli cooked vegan food for guests including director James Cameron and his wife Suzy. Apart from the UN, F4D is also partnering with Sustainia, a Danish think tank, and will host an event for 2,000 people in Copenhagen later this year. Evangelou wants people to re-examine their consumption habits and see the virtue in buying fewer, higher quality items.

The idea behind roping in celebrity voices is simple. “When Kim Kardashian says ‘I bought this shirt’ to all her followers, they are going to go buy that shirt too. That’s the idea. How do I make it fashionable [for others] to do that?” 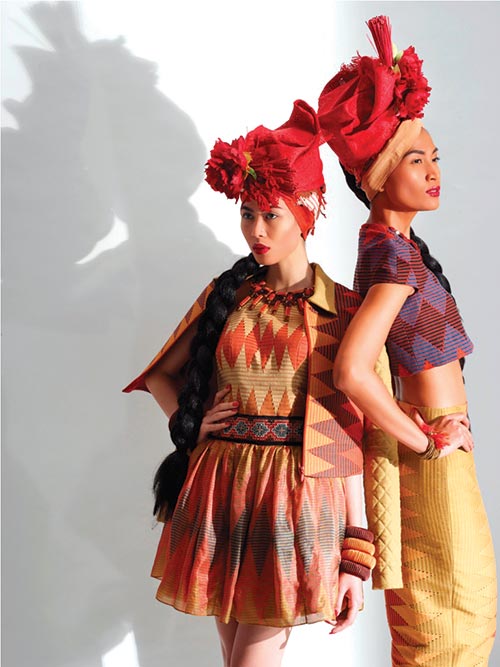 F4D has an annual budget of around one million dollars, which comes from individuals and companies who have signed up as sponsors. It has a full time staff of three, with dozens more who are brought in for specific projects. The social entrepreneur tells me about F4D at CORE: Club in Manhattan, a private members club where the joining fee is $50,000 and the annual membership is $15,000. One of the main draws of the club is its wealthy members, but Evangelou says she has yet to tap them for funding. Once a year F4D publishes a magazine, ModaVIE, and it has its own online TV channel with occasional broadcasts that Evangelou wants to expand. She decided to keep F4D as a private venture rather than a non-profit because she wanted sponsors to be fully on board with the mission. “I didn’t want them to come in because it’s a tax write-off. I built it as a brand.”

In her early years as an entrepreneur, she began by organising events that showcased artists, designers and filmmakers at the prestigious Lincoln Centre in Manhattan. The first one took two years to organise and in the beginning everyone completely ignored her pitch for sponsorship. Eventually, she had Saks Fifth Avenue and Gucci on board, an achievement she puts down to her being relentless when she needs to be. By the time F4D happened, she had already honed her entrepreneurial skills. One of F4D’s early successes was persuading Franca Sozzani, Editor-in-Chief of Vogue Italia to do an entire issue on Africa. UN Secretary General Ban Ki-moon agreed to do a six-page interview and the magazine promoted dozens of African designers who were brought to Milan and New York where their work was showcased. Evangelou says that the magazine gave African fashion the lift that they needed and they rolled with it. “I think that was one of our most impactful beginnings because it was the first time ever a fashion magazine went to Africa and interviewed presidents, prime ministers, first ladies and mixed it with fashion designers, architects, entertainers,” says Evangelou.

In 2012 the UN announced its collaboration with F4D on reaching the Millennium Development Goals – the partnership appears to have been one of their shared aims rather than specific projects. F4D also has a foundation called ModaCARES which each year selects emerging designers and helps them grow their business in line with UN development goals.

Evangelou says that the aim of F4D is to make sustainable living which is why next in her sight are retailers like H&M and Zara who favour a more disposable form of fashion. One of the F4D’s ambassadors, actress and philanthropist Olivia Firth, has been forthright in her criticism of their business model, something Evangelou agrees with. “I feel that if they don’t start to make those changes in the next decade or so they’re not going to be relevant because the new generations are not going to buy it. The whole mindset it changing and we are responsible to change that mindset,” adds Evangelou.