The old adage that men marry their mothers couldn’t be more apt of tech entrepreneur Alexandre Mars. The Paris native, who has been described as the French Bill Gates, has the women in his life to thank not only for his success but also his desire to share it.

The entrepreneur-turned-philanthropist made his fortune by creating and then selling his tech start-ups. He’s now using his wealth to fund his own non-profit, the Epic Foundation, which selects the most impactful charitable organisations around the world and connects both wealthy and non-wealthy donors to them. Mars’ philosophy is that if donors are better informed about the charity, they will give more as a result.

Speaking from his office in New York where he now lives, the Parisian credits his mother for his social conscience. “I always knew that when I became successful I’d have to start sharing my success,” Mars recalls. “I grew up watching my mum helping out the local community, and as an entrepreneur from the age of 17 I thought, ‘How can I scale that?’ That’s how I came up with Epic.”

The 42-year-old admits that the arrogance of youth led him to believe that his success would come a lot sooner in life than it did. “At 20, I was sure I would be the next [Bill] Gates in three years. I was sure the Internet would help me and I would go to the top super quick. Then I realised it wasn’t that easy. It takes time, and luck!” 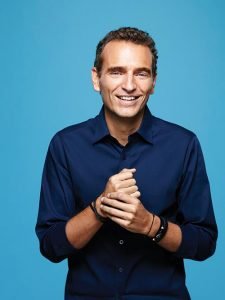 Mars shouldn’t beat himself up too much, though. He still managed to make his fortune in tech and start his own foundation all before he turned 40. He now spends 90 per cent of his time on the foundation, and his remaining time is divided between running his family office, where he still invests in tech, and campaigning as a board member for his hometown’s Olympic bid for the 2024 games.

Epic Foundation was created on the back of a four-year-long market research project designed to find organisations that are making the most impact in the fields of child and youth giving each year. “If you ask 100 people whether they gave to a charity last year, most will answer yes,” says Mars. “But if you ask them whether they thought they gave enough, most will answer no, even if they had the desire to give more.”

The reason, he argues, is threefold: a lack of trust, followed by the inability to track donations, and the need for better engagement between charities and donors. “When we asked what was holding donors back from giving more, we found that they didn’t trust social organisations. They didn’t know where their money was going because they couldn’t track it.” Another contributing problem, Mars adds, is analysis paralysis. “In New York City there are 160 organisations tackling breast cancer. How do you know which one to help?”

Mars believes the solution lies in technology. Epic identifies and recommends organisations, thereby simplifying the task for donors, and has developed an app to track a charity’s impact and show where the donations are going. The foundation also uses virtual reality to film those organisations, enabling donors to feel more connected to them, and has implemented a new online donation function encouraging gifts of $1 and up.

Even so, Mars and his 28-strong team in Epic Foundation believe the bigger picture is not only about making charities more transparent but also making corporations step up. “We need a change in mindset in the corporate world. We want to encourage businesses to donate 1 per cent of their profits to charity.” Mars argues that if they don’t, companies will find it increasingly difficult to recruit millennials, who he claims will make up 50 per cent of the global workforce by 2020. “Twenty per cent of Stanford undergrads want to work in the social sector or become social entrepreneurs,” he says. This represents a major shift in attitudes between Mars’ Generation X and the millennial Generation Y. “For my generation it was all about us. That’s why we called it Generation Me. How can I be successful? The next generation still wants to achieve success but they want to see the purpose behind the success.”

Mars says his mother and his wife, whom he met in high school, made him realise that you don’t have to be Bill Gates or work for UNICEF to contribute to charity.

Last year, Epic Foundation received just under 2,000 applications, which was whittled down to 10 successful organisations that received funding and a place on their coveted list of recommended organisations. Charities apply online from all over the world and a selection team headed by a former United Nations head of policy analyses their impact, leadership and finances.

Once the finalists are chosen, Mars and his Epic Foundation team, which has offices in New York, San Francisco, London, Paris and Bangkok, “go where the money and the power is” to tout the charitable organisations that have been selected in a bid to get big-money donors to give.

Mars addresses people who want to give across three categories: the entrepreneurs (including the multi-generational family offices, private banks and wealth managers); individuals (aspiring philanthropists, young professionals, athletes, actors and artists); and the corporations that want to have more social impact.

“We go to 15 cities around the world. We tell them, ‘Look, guys, if you want to do more and you want to give money these are the organisations that are available and they have been vetted by us.’”

Mars interrupts the flow of the conversation to explain that he personally covers 100 per cent of the foundation’s $2 million operational costs. This means that 100 per cent of whatever his non-profit receives from donors goes directly to selected organisations.

“The objective is to change the trajectories of kids around the world. If you grow up in a slum, there is a low chance you will get out of that slum. We want to help those kids who were unfortunate enough to be born somewhere like this and change their trajectory.”