The Greek entrepreneur shaping accountable leadership in the Middle East

Elizabeth Filippouli, founder and CEO of Global Thinkers Forum, has royalty, business leaders and public policymakers on-board who are shaping the role of accountable leadership and philanthropy in society.

Three years ago, London-based Greek journalist-turned-social entrepreneur Elizabeth Filippouli took to the stage in Turkey for a TEDx Talk to explain why just months earlier she had set up the Global Thinkers Forum (GTF). She spoke about the key influences that led her to create the Global Thinkers consultancy in 2010 and non-profit Global Thinkers Forum two years later in 2012. These included people – her father was a journalist and author who had a troubled childhood and became a sailor in his teens so that he could see the world; places – a conference in Kazakhstan where during some free time she visited the nearby areas and photographed a woman with an infant who was living on less than $3 a day; and experiences – coming across a homeless family in, arguably one of the world’s most advanced nations, Japan.

Speaking to Global Citizen from London, GTF founder-and-CEO Elizabeth Filippouli explains the genesis of her project. “The idea behind Global Thinkers is that we live in a world that is so inter-connected and inter-dependent that we need to have a perspective that can benefit larger society while at the same time promote good governance and ethical business practices. The mission goals are three fold – promoting accountable leadership and value-based decision making among incumbent and future leaders, women empowerment and youth development.”

Filippouli’s entrepreneurial venture is also divided into three main segments. The first is the Global Thinkers Forum, a non-profit organisation launched in 2012 under the patronage of Her Majesty Queen Rania of Jordan. The second is the Global Thinkers Mentors programme, an eight-month mentorship programme set up in 19 different countries where the organisation connects youth between the ages of 18-29 with international mentors who are experts in their respective fields. The third is the Global Thinkers – a consultancy that helps companies update their decision-making processes that Filippouli started back in 2010 when she decided to quit journalism and become an entrepreneur. 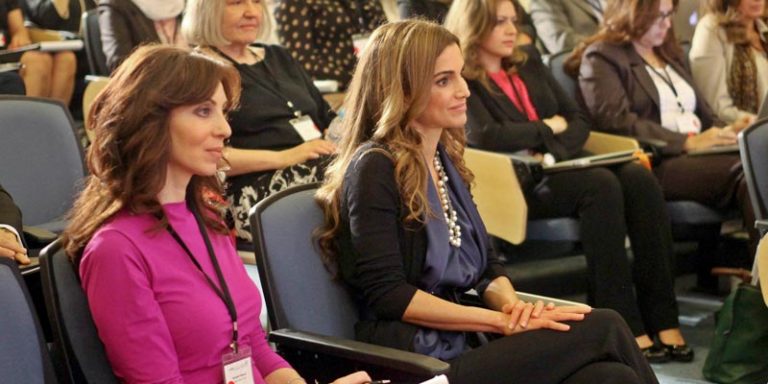 “Entrepreneurship has been in my blood. I’ve always been fascinated with taking an idea into the market and helping it flourish. I come from a family of publishers and journalists – my family goes back 100 years in journalism. I had a career and background in international journalism with Al Jazeera and CNN, among others. And so I went back to school to do two masters degrees at the same time between 2009 and 2011 – one in Transnational Media and Globalistation and the other in Strategy and Innovation in a Globalised World. Global Thinkers was incubated inside the Oxford business school,” says Filippouli.

From the idea of Global Thinkers consultancy, came the idea of the Global Thinkers Forum dedicated to the idea of philanthropy. “The very idea of GTF is that we need to pay it forward. Philanthropy comes from a Greek word that means ‘love for the human being.’ GTF creates international gatherings and trainings and works with entities like the Arab Foundations Forum where we conducted a seminar on value-based leadership for the King Khalid Foundation in Saudi Arabia last June on the advantages of philanthropy for the private sector and how it can be very profitable to their business.”

GTF has a well-defined management leadership structure in place. The advisory board consists of 28 members – “Sadly, we lost one of our most dynamic members, Ameera bin Karam, a very prominent Emirati lady and the head of the Sharjah business women’s council who lost her life in a fire in October.” Then there’s the global growth board with business leaders and those that share GTF’s vision and lastly there’s the non-executive directors board with members similar to the growth board but which also include award honourees from Global Thinker Forum’s annual gala event.

This year’s Awards Gala will be held in London on December 8th. Past awardees include some of the biggest names across business and public life including Arianna Huffington, Sir David Frost, the late Zaha Hadid and Nouriel Roubini. This year, one of the organisations that GTF is awarding is the Alwaleed Philanthropies – Prince Alwaleed bin Talal of Saudi Arabia has pledged his entire fortune to philanthropy. “We find this to be an example that ideally needs to be followed by other billionaires globally,” says Filippouli. The other is the International Red Cross because of their work in the global humanitarian refugee crisis. And the third is One Heart World-Wide Foundation launched under the auspices of the Dalai Lama by a lady who has had tremendous success in reducing the number of deaths among women in labour.

Muna AbuSulayman, Elizabeth Filippouli and Becky Anderson, at the GTF 2014 Awards For Excellence.

Apart from giving the awardees international recognition, the awards also act as a network that furthers the core goals of GTF. For example, Egyptian journalist Shahira Amin teamed up with Slovenian politician Sonja Lokar – both of whom were GTF awardees – to conduct a series of workshops for Egyptian women in Cairo furthering one of the organisation’s core goals of empowering women.

But for now, Filippouli’s biggest focus area through GTF is youth development especially in the Arab population, where there will be millions entering the job market over the next decade.

Filippouli believes that this can be solved by policy makers and through the educational system, “ They need to understand new trends around job creation and help train young people for jobs and expertise that will be in demand 10-20-30 years from now so that they could be part of a global market.” GTF create workshops to help young people become entrepreneurs to teach them how they can launch their startups. She also underscored the importance of creating “knowledge based economies and societies that have developed human talent.”

Filippouli knows better than to resort to a cliché. So when it comes to one – ‘thinking globally, acting locally’ – she isn’t repeating it, rather she’s living it.