Britain’s former first lady opens up about the Cherie Blair Foundation for Women and on being persecuted by the British media.

Having arrived to her husband’s grand offices, a stone’s throw from Oxford Street in London, Cherie Blair sits herself down in a button-back leather sofa. Britain’s former first lady – an eminent barrister and Queen’s Counsel – is giving a rare interview to Global Citizen to talk about the Cherie Blair Foundation for Women, which was established in 2008, a year after husband Tony left Downing Street. It is part of what she describes as her “crusade”: promoting the economic empowerment of women, and “particularly how women entrepreneurs can be the drivers of development”.

The three pillars of the charity are all personal. The first centres on enterprise; the 62-year-old says she sees herself as an entrepreneur, having set up several legal businesses. “I like to be an innovator,” she enthuses. Her Enterprise Development Programme aims to transform women’s small businesses into thriving concerns by building what Blair calls the ‘three Cs’: capability, confidence and capital.

The charity has so far reached 136,000 women across more than 90 countries from Afghanistan to Zimbabwe. Its Promoting Women Entrepreneurs in the UAE project concluded at the end of 2016, having provided participants with training in enterprise development and financial literacy. Studies have found that Lebanese women helped by the foundation increased their business skills by an average of 93 per cent. Eighty per cent of Israeli women showed increased confidence, while 65 per cent of Indian women had gone on to access new business networks.

A Palestinian project has helped In’am al-Khaidr, from Nablus, who in 2014 set up a company buying, raising and selling calves (an industry dominated by men). She was helped to craft a business plan – as well as diversify. Al-Khaidr now also produces milk and cheese so she does not have to wait eight months (the time it takes to fatten and sell a calf) before generating a profit. Two years ago she had three calves. Now she has 15. 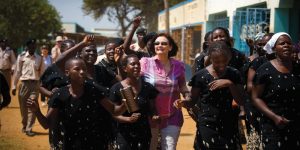 Cherie Blair in Kenya with the women’s group that her foundation is sponsoring.

The foundation’s second arm tries to harness technology, specifically mobile phones. “We found that there was a $13 billion opportunity if the industry could reach the 300 million women who could be connected to the mobile phone but weren’t,” says Blair, who describes herself as a tech addict and spent her maternity leave learning how to use the new office computers. The mobile programme has provided more than 100,000 women in Nigeria, Tanzania and Indonesia with business training via SMS message, and a further 10,000 with classroom-based education. It has trained 2,500 female entrepreneurs in Nigeria to become ‘branchless banking agents’, who will in turn offer mobile financial services to 75,000 rural residents. And 1,500 saleswomen in India have been supported in managing their agricultural supply chain through their mobiles. Instead of spending up to seven hours a day travelling to order new stock, they can simply tap in their orders on an app – an innovation that has boosted profits by as much as three-fold.

Finally, her Global Mentoring Programme, which started in 2010, has paired more than 2,000 women across the world with experienced entrepreneurs – both female and male – on a dedicated online platform. (As far as mentors go, Blair lucked out. She counts Hillary Clinton as one of her key champions – “a huge supporter and friend to me, and a big friend to our foundation,” she says.) The statistics are impressive. Surveys show more than three quarters of mentees reported an increase in revenue, while a third were able to prevent their businesses from failing thanks to advice garnered through the programme.

Blair excitedly reels off case studies: “You can – for example – have an Australian who works for DHL in Prague supporting a woman in Kenya who has a motorcycle dispatch business. We had a woman who has a slate quarry in Zambia. We had an internet tarot reading service – apparently it’s a big thing in India. I had no idea!”

Blair, who recently became a grandmother for the first time – “so we’ve got an investment in the next generation as well there” – describes herself as an eternal optimist. She certainly needs to be, campaigning for women’s emancipation at a time of increasingly rabid misogyny. Talking of Clinton, and of women’s rights globally, how must she have felt during a US presidential election riddled with sexism, and that ended with her friend’s electoral oblivion? “Well, obviously, personally I was disappointed,” she says, adding “as a girl at 14, I wanted to be the first British female prime minister.” 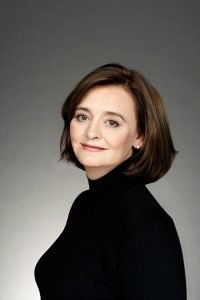 There is something refreshing about Blair – notoriously outspoken and described by her husband as his “bolshie Scouser” (in reference to her Liverpool origins). A working-class girl brought up by a single mother, after her father walked out on the family when she was eight, she studied law (coming top of her year), established herself as one of the UK’s leading barristers, brought up four children and stood shoulder-to-shoulder with the country’s prime minister – all while being the only PM’s wife in history to work full-time. And yet, in Britain at least, she has endured 20 years of abuse, much of it inherently sexist. “Gobby and vulgarian”, “too scary, too feminist and too clever” and “the Wicked Witch who has settled for a pot of gold and a vast property empire” are just three of the barbs.

Blair is both warm and chatty, though acutely media savvy. She rattles off a barrage of detailed statistics, delivered from memory (“give a development dollar to a woman, 90 cents of that will be spent on people other than herself. And it’s only 30 to 40 cents to the dollar in relation to men” or “the cost of gender inequality in sub-Saharan Africa $95 billion per year”).

She is aware of her perception among the public for being money hungry and she deftly counters it — Blair, who was once caught selling her husband’s autograph on eBay for $12, has been dubbed by the press as, “The richest multi-property owning former occupants of Number 10 in history,” with her and her family listed as owners or co-owners on 37 properties worth an estimated $33 million, including several in central London. However, Blair is quick to point out that, “You only have to look at some of our predecessors and where they live and where we live to realise that that’s just not true.”

“Everyone thinks I must have been born rich. I don’t claim that I’m poor now, but I absolutely have all the instincts of someone who was born poor to make sure that I save and I invest for the rainy day that may or may not ever come. It’s what you do with your money,” she says, before cataloguing both her and her husband’s charitable endeavours.

I point out that Donald Trump, a billionaire, does not seem to have bothered himself with any kind of [genuine] philanthropy. “Well, I don’t want to compare Tony to Trump,” she says. “But he’s given now £8million to set up his institute,” referring to her husband’s new organisation, announced in December, “designed to build a new policy agenda for the centre ground”, and seen by many as his re-entry into politics. “I think we try to practise what we preach, which is that if we’re fortunate in life, we try and make sure that we share that, to help other people.”

Before I go, Blair removes an earring etched with the foundation’s logo to show me the jewellery crafted by one of her charity’s mentees, shakes my hand, and I’m ushered out into the relative calm of central London rush hour.