Building a Center for Hope

The Amal project, which means ‘hope’ in Arabic, has delivered its first set of recreational caravans to children in Jordan’s second refugee camp

The Global Citizen Foundation (GCF) in collaboration with ASmallWorld Foundation joined the AMAL Project initiated by Dubai-based fashion brand GlamOnYou and visited the Azraq refugee camp in Jordan to deliver its first charity project in mid-August.

Under the scorching summer sun, GCF and its partners delivered two caravans as part of the Amal project, each will function as recreational play centers for children. The caravans have been customised to offer optimum light with additional windows added, and the exterior has been wrapped with playful stickers to add a hint of colour to an otherwise uniform camp.

The new “educational playrooms” are filled with books, stationary and toys for the children who make up fifty per cent of the camp’s population. Paid volunteers from the camp will supervise the children and make sure it remains a safe environment.

Mr Armand Arton, co-founder and trustee of the Global Citizen Foundation said that the new facilities where much more than physical structures offering shelter to the children of the camp.

He said, “We hope these interactive spaces will become part of anongoing rehabilitation process to help these kids deal with the horrific experiences they have already witnessed in their young lives.

“We hope that these spaces encourage children to interact and express themselves and, essentially, let children be children.” 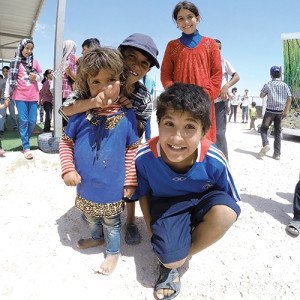 Most of the families living in Azraq camp left everything behind when they fled Syria, expecting the war to be temporary. With little-to-no savings and few belongings, they are surviving on the bare minimum, and over two years on their lives continue to be on hold.

Unlike Jordan’s largest camp Zaatari, which accommodates more than 80,000 refugees and is located 12km from the Syrian border, Azraq is highly decentralised. It is divided into four districts or “villages” that each can house 10,000 to 15,000 refugees.

The rows of white metal cabins that make up the “villages” and house around five people in the 24 square meter space, provide little shelter from the elements – in summer temperatures reach up to 50 degrees and in winter they dip to minus five degrees.

Each district has a medical clinic and there is a central hospital run by the Red Cross and even two schools with capacity to teach up to 10,000 pupils. However, families have only one supermarket to shop in and often complain that its “too expensive”, it accepts the vouchers handed out by the World Food Programme to each family, equivalent to $28 per month per person or less than $1 per day.

Acknowledging that the Amal project is only a drop in the ocean, Armand Peponnet, co-founder and trustee of GCF, said he was pleased with the “positive impact” the caravans had on the children.

“I’ve been told by the volunteers that the very same children I witnessed playing and laughing at the opening of our caravans couldn’t even talk when they reached the camp as they were so traumatised by the terrible experience they had back in Syria and their journey to the camp.”

“I really believe that the social activities offered within these child-safe areas like ours and others will prove to be the most efficient way to get children back on their feet and to bring back a sense of normalcy in their life again,” said Peponnet.