Belgian philanthropist Baroness Myriam Ullens de Schooten and her husband, Baron Guy Ullens, are among the world’s biggest owners of Chinese contemporary art. The founder of the Mimi Ullens Foundation talks to GC

Myriam Ullens is the kind of women who makes the world better. Elegant, smiling, easygoing, accessible, she is also extremely generous. For her, it is not a question of philosophy, more a way of life.

“I’m not doing everything I do to feel better or, as many do, to give back something,” she says.

“It is because I really feel concerned. If I could change everything and start again from scratch, I would be a doctor.”

The woman her friends and staff call by her nickname Mimi is so humble, she rarely speaks publicly about her charitable works, even though her life would make fascinating reading. That could soon change though as Ullens, 61, has already secretly written a 1,000-page family saga, a manuscript she keeps for the moment hidden in a drawer, until the right time comes.

She did not start out in life as blessed as she is now. Raising two children alone, she was struggling to make ends meet. Her passion for food and her skills as a cook led her to launch a pastry workshop. Soon she was working up to 16 hours a day, seven days a week, struggling between her business and her family. “I was looking for investors to develop my small business and that’s when I met Guy,” she recalls.

She fell in love with her business partner, Baron Guy Ullens de Schooten Whettnall, 79, a Belgian aristocrat, heir to an important industrial family and billionaire. But it was nearly 10 years before they actually got together and married in 1999. “Guy asked me to quit my company. I accepted but told him I was going to get involved in philanthropy instead.”

Life quickly changed but not in the way one would expect for a newly crowned billionaire. Ullens became transfixed on helping those less fortunate. One day in Nepal where she was visiting a friend with her husband, she was struck by the large number of orphans and the poor conditions they were living in so decided on the spur of the moment to open an orphanage.

“I did not want to create another humanitarian association or structure so I checked who was involved and partnered with a Nepalese NGO,” she says.

For the past 25 years, she has continued her involvement in Nepal, where she goes regularly to oversee operations. “Now we have other orphanages and care centres. But we also opened schools and the fees help finance the other operations.”

Her good friend Guy Savoy, the Parisian three Michelin star chef, says of her: “Whenever she comes into a room, she fills the whole place with her joy and laughter.”

It was this same spirit that carried Ullens through a devastating blow in 2003 when she was diagnosed with breast cancer. She briefly refers to that period saying: “I was ill for a few years. When I was cured, I decided to devote some of my time to accompany patients who come across difficult times.”

Ullens struggled for five years with a tumour and underwent several bouts of chemotherapy. She admits she thought she was going to die because she was so tired and weak.

It was the first time that she had to put other people’s battles aside and fight for herself.

But true to form, she did not wallow, instead forming the Mimi Ullens Foundation in 2008, which has helped nearly 20,000 patients.

“We partner with hospitals, in Belgium, France and Switzerland to help cancer patients fight against their illness,” she says. “Not medically, though, but offering assistance in everyday life to keep them going. It is a really important issue.”

Ullens regularly hosts charity dinners and auctions throughout the world to raise money for her foundation. She cites Bill and Melinda Gates as philanthropy models, saying they are “an example for all of us”. 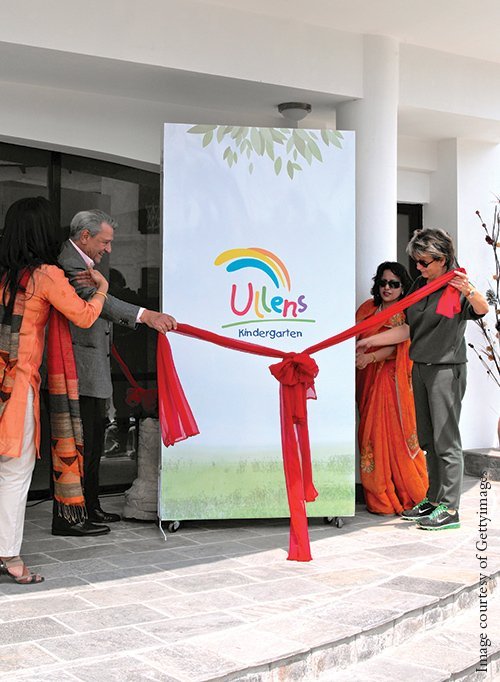 From time to time, she gets involved in exhibitions from her husband’s art collection in China. “We composed it together. When we started going there in the early 1990s, Chinese contemporary art was not as fashionable. Nobody was interested. Artists hid themselves in the aftermath of 1989. We would visit them in very hidden places, looking at the paintings with a torch in a staircase or a parking lot.”

As a result of her extensive travels and the discovery of the most refined cashmere wool in Asia, Ullens decided to create a capsule collection of fashion for women called Maison Ullens with her granddaughter Laurence. She started with a few pieces and a small showroom before hiring stylist Veronique Leroy.

Her luxurious nomadic ready-to-wear apparel in leather and cashmere is aimed at frequent flyers like herself who want to feel comfortable yet chic. With a flagship store in Paris and plans to expand to the US, Russia, Italy and the UAE, the social entrepreneur says her goal is “to create enough revenue from my fashion brand to pay the expenses of my Mimi Foundation”.

In the meantime, the power couple continue to fly from Brussels to Beijing, from Paris to Verbier, where they live, or the Maldives, where they like to spend time in the winter on their magnificent sailing yacht. Although on paper they are every inch the European socialites, when you meet the couple and watch Myriam spend two hours cooking a pasta gratin in the kitchen and talk about her orphanage in Nepal, you can’t help but feel they are the polar opposite.

Ullens has already secretly written a 1,000-page family saga, a manuscript she keeps for the moment hidden in a drawer, until the right time comes.