This couple use drones to save refugees

Regina and Christopher Catrambone have given away half their fortune to save refugees from drowning in the Mediterranean.

It all started with a life jacket: a solitary item that Regina Catrambone saw floating in the Mediterranean during a family sailing holiday. Although unremarkable in itself, that life jacket had a profound effect on Regina and her husband Christopher and inspired the launch of a humanitarian organisation called the Migrant Offshore Aid Station (MOAS) that has so far saved nearly 12,000 lives. 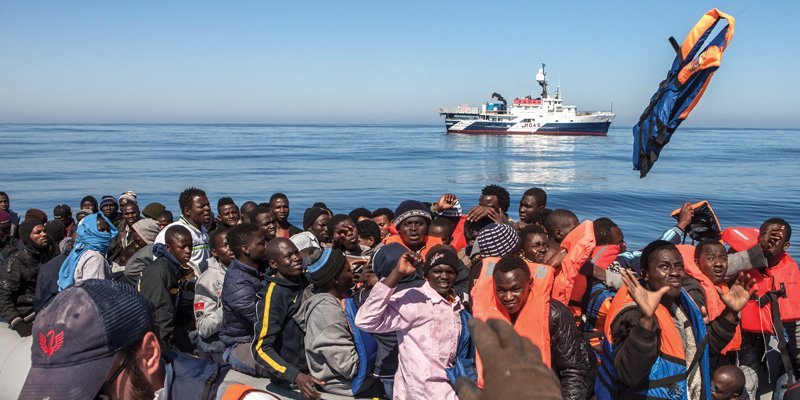 “It was probably a jacket owned by someone who hadn’t made it. That was a reality check for both of us. It was the tangible sign of the Mediterranean catastrophe,” says Regina. The couple acted swiftly. They invested their own time and money into launching the MOAS, a search and rescue service that patrols the seas to assist migrants and refugees. At the start of this month, another report surfaced of MOAS teaming up with the Italian Red Cross to rescue 354 refugees from what would have certainly been a watery grave. “The sea should be a beautiful place of happiness, not a cemetery,” says Regina.

The launch of MOAS in 2013 coincided with the start of a human exodus across the Mediterranean toward Europe. The UN Refugee Agency (UNHCR) produced a report called The Sea Route to Europe in July last year, warning: “Europe is living through a maritime refugee crisis of historic proportions.”

About 137,000 refugees and migrants crossed the Med in the first six months of 2015 alone, a staggering 83 percent year-on-year increase. Many were crammed inside unsafe, ill-equipped boats. Thousands perished in the attempt, with the number of deaths at sea reaching “horrifying new heights” during the first four months of last year, according to UNHCR.

Speaking from her home in Malta, an island nestled between Sicily and the north African coast, Regina explains that quickly locating and assisting people making the perilous sea crossing is vital. “The faster you arrive, the better it is for the people and their mental and physical condition,” she says.

In the summer they are dehydrated and need water, food and warm clothes. In the winter they suffer from hypothermia.

MOAS’s original search and rescue boat called the Phoenix is equipped with drones that pinpoint the location of vessels in need of help. Dinghies are then deployed to transport passengers back to the mother ship where food, water, life jackets and medical assistance are waiting.

Multi-millionaire Christopher, who escaped to Europe himself to make a new life after Hurricane Katrina destroyed his family home in the US, has funded MOAS with his wealth, which he acquired from his company Tangiers Group offering services including insurance, medical and security analysis to firms working in conflict zones. To date, the couple have poured around $10 million of their personal wealth into the charity, which has the motto ‘nobody deserves to die at sea’.

The couple are now appealing for help to fund MOAS via the international crowdfunding campaign #OneMore by asking sponsors to donate just “one more” life jacket, emergency kit or bottle of water in order to save more lives. “We are not Rockefellers or even close to that. We are a couple still in our 30s working to try to make sure these people who are fleeing do not die at sea,” says Italian-born Regina.

The couple met in Italy in 2006 while Christopher, who is from Louisiana in the US, was visiting the country to research his own family heritage. Perhaps surprisingly, the couple are often very hands-on during MOAS’s search and rescue missions. While at sea, Regina has spent time talking to many of the migrants and refugees. “Most of the time, these people are portrayed as having smartphones,” she says. “This is true because in Syria some were doctors, lawyers, nurses and teachers and they were having a normal life—just like I was having a normal life. Then suddenly, war happened.” 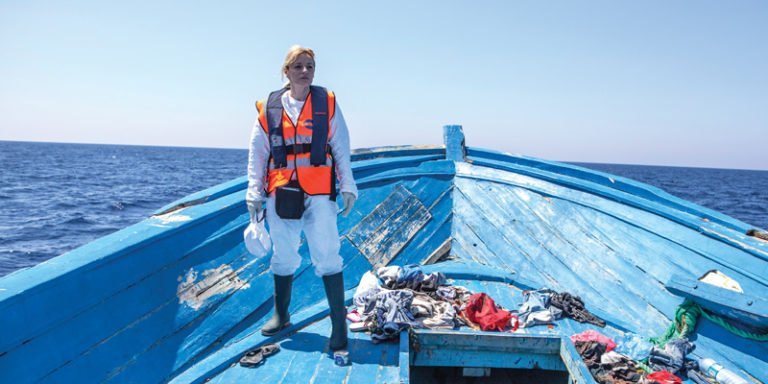 One conversation with a Syrian named Yusuf, who was travelling to Europe by boat, made a particularly big impression. “For him, taking this perilous trip was like jumping out of a window. He said it was better to die trying than dying without ever trying,” recalls Regina. MOAS recently stepped up its operation with the addition of a second mothership plus two high-speed search and rescue boats called Alan and Galip, in memory of the two young Syrian brothers whose deaths at sea last year prompted a groundswell of public sympathy.

And in December last year, MOAS shifted its search and rescue operation to the Aegean Sea near Greece, where its help is most urgently needed. The UNHCR’s report describes a “major increase” in refugees and migrants – mainly from Syria, Afghanistan, Iraq and Somalia – attempting to cross the stretch of water from Turkey to Greece.

The Catrambones hope the charity will save lives at sea far beyond European waters. Starting this month, the Phoenix is due to start a search and rescue operation in southeast Asia’s Andaman Sea in what is described as MOAS’s “most ambitious and challenging” mission to date.

The sheer scale of the global refugee crisis means that MOAS will continue fundraising indefinitely. The charity’s work has already earned it international acclaim, including one of Malta’s highest honours, the Medal for Service for the Republic. Co-founders Regina and Christopher were listed among Foreign Policy magazine’s 100 Global Thinkers of 2015 and received the Global Citizen Award at the annual Global Citizen Forum held last year in Monaco.

Regina was also awarded Italy’s Order of Merit by Italian President Sergio Mattarella. Her response to such accolades is simple: “My husband and I did nothing more than what should be done. If a person is down, our human nature should be that we bend and lift them back up again.”