The Boat for Billionaires

Axioma is the superyacht of choice for the rich and famous.

At 72 metres long and 12 metres wide, Axioma is three times the minimum prerequisite for a superyacht. This makes her one of the most powerful and luxurious crafts in the world – one loved by billionaires, business executives and celebrities alike. Launched at the Monaco boat show in 2013 as Red Square, she has seen all sorts of big names on board, from F1 motor racing champion Lewis Hamilton to movie stars and models like Gigi Hadid and Kendall Jenner.

Global Citizen put her to the test in January and found the hype to be absolutely justified. She has five decks that include a dozen staff cabins, six staterooms and acres of extra space for guests to enjoy themselves. The interiors are designed by the late Alberto Pinto, who said he deliberately used simple pastel colours and materials that were not too ornate. He aimed to create a summerhouse feel rather than that of a stuffy, old-fashioned hotel.

Some of the VIP cabins have marble bathtubs and private terraces and stretch across the entire width of the yacht while all are equipped with five-star hotel facilities, including wifi, air conditioning, adjustable lighting and power showers. White fluffy towels are delivered constantly, whether people are getting out of the jacuzzi, the swimming pool on deck or the sea (water onboard is provided by a reverse osmosis system that removes salt from seawater). Other shared facilities include the gym, bars, steam room and an eight-seater 3D cinema with a well-stocked library. 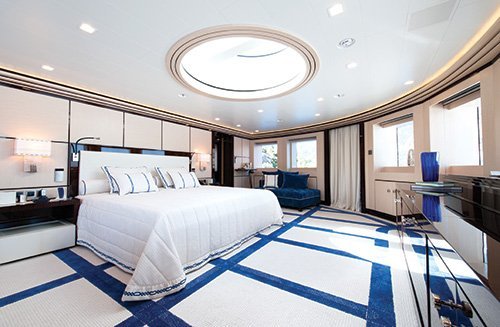 Beyond the glamour, the Axioma is ultimately an exquisite piece of ocean-going machinery. Her twin Caterpillar engines allow her to do 6,000 nautical miles at 14 knots, thanks to her 172,400-litre fuel tanks. Each year the Axioma runs up 20,000 nautical miles, split between the Caribbean and the Mediterranean, as she chases the sun.

She comes equipped with numerous nautical toys, all of which are kept in a dedicated room on the waterline. It contains everything from top-of-the-range 50mph jet skis to sailing boats, diving equipment, paddleboards and bright yellow submersible Seabobs, propeller-driven bodyboards. When Jenner and Hadid holidayed on the Axioma, their videoed leap into the ocean from the top deck went viral on social media.

“It is your charter and you tell us exactly what you want to get the best out of it,” says Suzie Sawers, the yacht’s Chief Steward. “We are here to work out exactly what you want. We are always happy to help with any request—however obscure.” There are up to 22 crew working at any one time, all keeping in regular contact via headpieces and microphones. They pop up from discreet entrances around the boat and then disappear again when they are no longer needed.

Chef Stephen Paskins, who has worked in numerous Michelin-starred restaurants on dry land, is responsible for the 24-hour-galley, along with a sous chef. Paskin’s range is exceptional. He makes everything from scratch, including bread and cake. Fresh ingredients are sourced from the Caribbean islands and if essentials are not available, they are flown in and couriered to the boat. This meant $1,500 pots of Beluga caviar, Japanese wagyu beef and Spanish cured meat were as ubiquitous as Cristal champagne (vintage and non-vintage, according to preference). And if you have $70 million to spare, you could actually buy her. 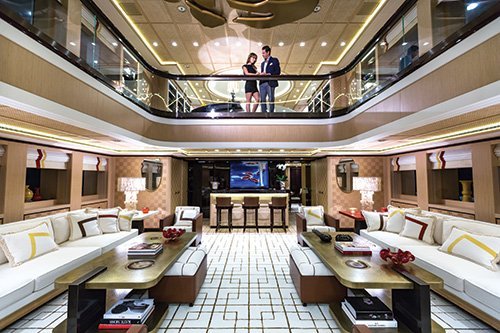 The Axioma is now booking for its winter season in the Caribbean exclusively through Yachting Partners International (YPI), from $577,000 per week. For more information visit www.ypigroup.com or download the YPI Selection app.