Are you ready for a Lexus yacht?

We’ve become accustomed to luxury carmakers diversifying their business. From a Lamborghini speaker, to a Porsche real estate project and even an Aston Martin yacht – carmakers are showing that they can do much more build four-wheeled people haulers. The newest arrival to the scene is Toyota’s luxury division, Lexus that has unveiled this 42-foot Lexus Sport Yacht concept. 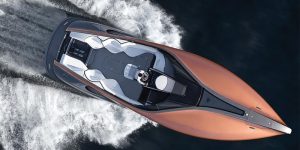 The Lexus yacht is powered by twin V8 engines and capable of reaching a top speed of 43 knots.

Unveiled at Miami Beach by Toyota Motor Corporation’s president, Akio Toyoda, the boat is a collaboration between Lexus’ designers and Wisconsin-headquartered Marquis Yachts. The engine comprises of twin 5-litre V8 engines that are modified versions of those used in the Lexus LC 500 performance car. It gives this yacht a combined output of 885hp, enough to reach a top speed of 78kph – or 43 knots in marine speak. The yacht also has a turbo-boost option which, when engaged, adds 1,000rpm for an adrenaline-fuelled sprint.

To ensure that the boat is lightweight, yet tough and aerodynamic, the engineers used carbon fibre and a composite of reinforced plastic in the body’s construction. It allowed the engineers to shave off nearly 1,000kgs. There is a 7-inch touchscreen in the centre of the steering wheel that acts as a master controller for the yacht’s navigational functions and entertainment treats that includes a Mark Levinson sound system. The Lexus yacht doesn’t have a separate sleeping area, but it does have the convenience of a shower and kitchen kitted with a refrigerator and stove. 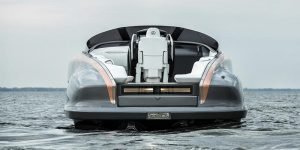 The boat is a collaboration between Lexus’ designers and Wisconsin-headquartered Marquis Yachts.

Toyota is no stranger to the yacht business. The Toyota Marine Division has been making yachts that use modified Lexus diesel engines since the Nineties, but none of them were exported. They were all built only for the domestic market. This Lexus yacht will instead be a product that is specifically marketed internationally.

Lexus haven’t announced any specific details about its production or launch date yet, but if the actual model manufactured commercially is even half as gorgeous as this one, it’s bound to a toy that that will be on the wish-list of playboys from Miami to Monaco.