The president of Bugatti, Wolfgang Dürheimer, has conducted a meticulous profile study of his clients. He concluded, in an interview with Top Gear, that the average Bugatti customer already owns “64 cars, three jets, three helicopters and a yacht.” Of course that customer doesn’t need to dig too deep in his pockets to fork out the nearly $2.5-million he requires to buy a Chiron – Bugatti’s latest 1,500hp hypercar. 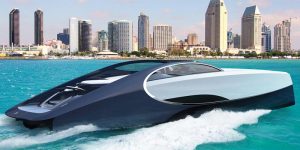 The yacht is limited to just 66 units. 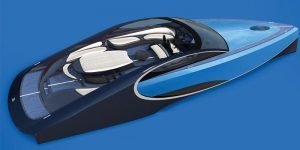 For roughly the same price, French carmaker Bugatti and Monaco-headquartered yacht specialist Palmer Johnson have partnered to debut this limited edition Palmer Johnson X Bugatti Niniette 66 Yacht. The name Niniette has an interesting history: Ettore Bugatti, the eponymous founder of the carmaker was commissioned by Prince Carlo Maurizio Ruspoldi to create a one-off speedboat in 1930. Bugatti chose to name it Niniette, the pet name of his youngest daughter Lydia. 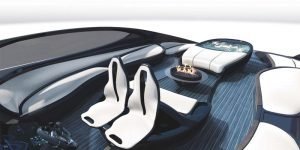 There’s a Jacuzzi and fire pit on the sun deck.

Modelled on the Chiron, the new 20-metre bugatti yacht was two years in the making. It has plenty of flowing curves and state-of-the-art materials used in its construction. Go below, for a full-sized master bedroom suite with a lounge, bathroom and kitchen. Expect to find extravagances like a Jacuzzi, a champagne bar and even a fire-pit on the blue morta oak wood sun deck. Because no one ever slums it in a Bugatti. 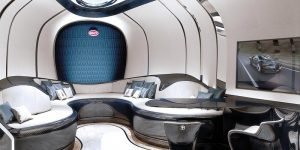 There’s plenty of carbon fibre used in the well-appointed interiors. 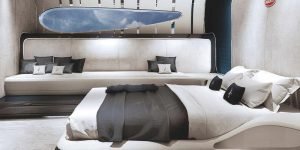 A full-sized bed for guests who’d prefer to spend a night out on the high seas.

The 16-litre 1,200hp Man V8 engine propel man and machine to a top speed of 48 knots – no speed demon, but no slouch either. The deliveries of this sleek bugatti yacht limited to just 66 units will begin a year from now. Even if your name isn’t down on the list already, there’s good news. Bugatti has confirmed that this model is the first of three yachts that it will introduce over the next few years. Just make sure to mention you already own 64 cars, three jets and three helicopters and a Chiron on your application form.