The RM 50-03 McLaren F1 is the world’s lightest split-seconds chronograph.

Eponymous watchmaker Richard Mille is known for his avant-garde timepieces. He not only makes some of the world’s most expensive watches, but also a few of the most mechanically complex timepieces on the planet. It’s not unusual to see sportsmen wear the watchmaker’s creations both at work and play. Rafael Nadal often takes to the court with a $800,000 Richard Mille strapped on his wrist, Felipe Massa had an RM on his wrist when he crashed hard at the 2009 Hungarian Grand Prix (both survived, relatively unscathed) and Yohan Blake wore another ultralight RM on the track when he gave Usain Bolt a run for his money at the 2012 London Olympics. 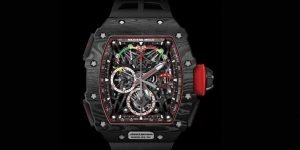 The watch weighs only 40 grams with the strap and was introduced at the SIHH 2017 in Geneva.

With RM’s sporting credentials well vetted, it came as little surprise when the watchmaker announced a 10-year partnership with F1 team McLaren-Honda last year. This new timepiece unveiled at the recently concluded SIHH in Geneva is the first one to celebrate that partnership.

The calling card of this watch is its weight – or rather the lack of it. At a mere 40grams along with the strap, it’s packed in some mega complications including a manually-wound tourbillon and chrono, a power reserve indicator and movement whose torque can be controlled from the crown itself. To create case the case of this featherlight timepiece, RM and McLaren created a proprietary new material called Graph TPT that’s not only incredibly light, but also ultra resistant. The watchmaker and carmaker together turned to the North thin Ply Technology (NTPT) and the University of Manchester National Graphene Institute to help them to create this material that consists of carbon fibre injected with resins that contain graphene. 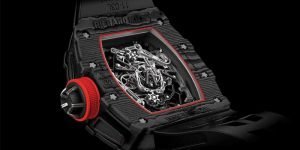 There are only 75 pieces of this timepiece that Richard Mille says has been tested to successfully withstand up to 5,000Gs (a fighter jet pilot takes 9g when pulling up at near right angles). Priced at just under a million dollars, this RM 50-03 Tourbillon Split Seconds Chronograph Ultralight McLaren F1 is certainly worthy of a podium finish.