Jaquet Droz is known for its intricate handmade dials. Now a new enamelling service is pushing the boundaries of bespoke watchmaking, resulting in one-of-a kind timepieces

Watching one of Jaquet Droz’s artisans at work is a humbling experience and one that sets a tone of both intensity and reverence. With tiny movements of the hand, nearly invisible to onlookers, master artisan Heidi Spiesser Alonet works quietly and intently on creating a miniature enamel masterpiece that will, when finished, perfectly capture the beauty of an underwater pond scene.

The canvas, or rather, watch dial, is better measured in millimetres rather than inches and the intricate details are so tiny, every stroke must be administered with the aid of a microscope. With the miniaturised dial offset to 12 o’clock, this leaves about half the creamy white 38mm dial for the artist to play with. 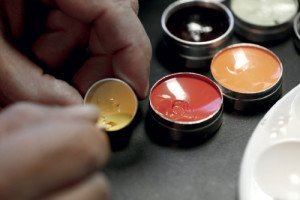 Each dial is painted entirely by hand, a process that can take up to a week, and if a single error is made during that time, the dial is rejected and the work starts again. Even just perfecting the paintbrush used to work up the scene – plucking out wayward bristles and endlessly shaping and refining – takes three months, according to Spiesser Alonet.

From within the Atelier de Haute Horlogerie at Jaquet Droz’s headquarters in La Chaux-de-Fonds in Switzerland, a varied collection of handpainted enamel dials have emerged as part of Les Ateliers d’Art range: ballet dancers, horses, dragons, tigers, cranes, even what appears to be a tiny cherub using a blue butterfly to pull itself along in a chariot.

But the artistic archives at Jaquet Droz are about to become even more diverse as the firm opens itself up to commissions. As of this year, anyone with a spare $30,000 or so can gain access to the skills of Spiesser Alonet and her peers, working with them to create exclusive one-off masterpieces of their very own choosing. 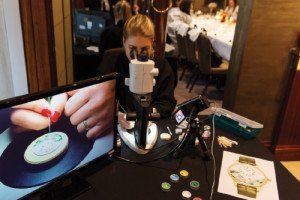 Once a sketch has been agreed upon, the artisans will set about bringing it to life in full colour – the mixing of the enamel paints is an artistry in itself – and on completion, the bespoke watch dial will be fired in a kiln to set, rendering the dial unalterable. The miniature artwork’s lustre and shine will be locked in place for thousands of years, according to Jaquet Droz, though unfortunately that is far too long a guarantee for any mere mortal to keep tabs on.

Keeping heritage horological artforms alive is the company’s raison d’etre and opening up this world to the whims of watch collectors is a brave move and a rare one, as the maison produces just a few hundred timepieces each year, thanks to the intricate nature of the work involved.