It boasts a rich heritage spanning nearly two centuries. H. Moser & Cie, originally founded by the Swiss-born entrepreneur Heinrich Moser in Russia in 1828, survived the Russian revolution in the early 19th century and went on to become known as the ‘little pearl of Schaffhausen’. Now the independent Swiss watchmaking company is heralding a new chapter in haute horlogerie.

Five years ago the company’s chairman Georges-Henri Meylan formed the new company Melb Holding, which took over H. Moser & Cie and Hautlence. The acquisitions provided a fresh challenge for the former chief executive of Audemars Piguet. “The two brands we took over were in really big trouble and on the brink of bankruptcy and that is not easy to restart,” he says.

Although H. Moser was losing money, he could see the potential of the brand, especially when bolstered by industry experience. “I tried to bring in the contacts I knew around the world – including the manufacturing network – and then transmit this to the new generation. It is a tough job for him,” Meylan says of his son Edouard, the chief executive of the watch brand. 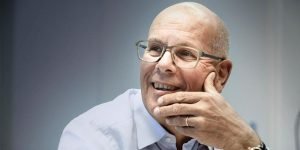 The job might be tough but Edouard has proven his mettle. In 2015, the Swiss National Bank took the landmark decision to end its three-year policy of capping the national currency from appreciating beyond 1.20 Swiss francs to the euro. Consequently, the luxury watch industry was up in arms as its products were instantly more expensive to foreign buyers and the threat of declining exports loomed large. At the time, Edouard wrote an open letter to the bank’s chairman, Thomas Jordan, appealing on behalf of entrepreneurs for them to reconsider.

Since the announcement, like many other Swiss watchmakers, H. Moser & Cie has streamlined its business operations. “We had to look at costs and review our budget. We wanted to continue to be Swiss-made but we needed to find solutions. We found out what was unnecessary and we cut back. In situations like this, you need to be creative and innovative in all aspects,” says Edouard.

“We brought more novelties to Baselworld and you need to do that to stand out. We did the sapphire crystal model that nobody would have expected from Moser, then a watch with no logo. You have to make things that people will notice.”

It is impossible not to notice an H. Moser watch. With the tagline ‘very rare’, the company produces 1,000 watches a year, each handmade. The independent, family-owned business does not have the resources of behemoths such as Cartier and Rolex, but is competing in the same field and standing out for its innovation. Edouard says polarisation is a better strategy than aiming for mass appeal. “When you want to sell watches that are in the range of 15,000 to 100,000 Swiss francs [$15,860 – $105,730] you do not just want people who like the brand – you want people who love it. We are working on being a bit more polarising. 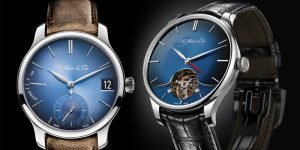 “Yes, you will have people who hate it but you will also have people who love it. We see the results in terms of sales – we go more extreme and get a fanbase. With our watch with no indexes, some people say, ‘This is stupid. You can’t even read the time,’ while others say, ‘I love it’. I think that is what Moser is all about.”

H.Moser is distributed in the UAE exclusively through Ahmed Seddiqi and Sons, which Meylan senior warmly refers to as a “family-to-family relationship”. Edouard says the Middle East is a market with “a lot of potential” and thinks the brand has become more appealing in the region. “We are not trying to be the big watch with lots of diamonds. We believe there is a strong market for people who want something recognisable but still elegant.” While H. Moser is not the only watchmaker to craft handmade watches, it remains committed to traditional craftsmanship with a modern twist.

“We want to stay very traditional in the way we do watchmaking with pocket watches, large power reserves and beautiful finishing but at the same time we want to be sexy and fresh,” says Edouard. “People want a classic, elegant watch but perhaps not the same one as their father or grandfather. That is the sweet spot for Moser — combining modern elements such as titanium but with traditional gold movements,” he says.

Appealing to the younger generation, however, is not without its challenges, with the rise of wearable tech like the Apple Watch. Yet Georges-Henri remains unconcerned. “When quartz started in the 1970s, they said the mechanical watch is dead. I say, if a customer just wants to tell the time, do not come to us – they are much more expensive than what you expect.”

Edouard says well-crafted mechanical watches have an enduring appeal, even in the age of technology. “It is comforting to have products with a human dimension. I think if you can keep this human touch, there is a bright future for brands like ours. There has always been an attraction to craftsmanship – something you can grasp – and I do not see it going away.”