A conversation with Richard Mille 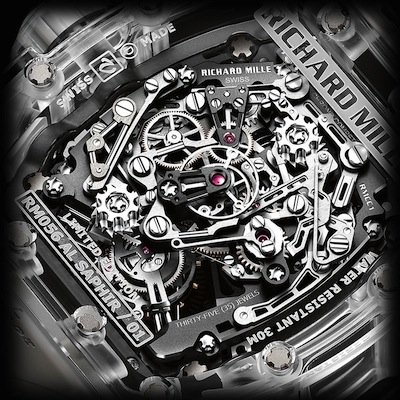 What was the inspiration behind creating your own brand?

I started out with Mauboussin and became President and CEO of the watch and jewellery company. I wanted to do what I like, not for ego reasons but just to have the freedom to develop what I wanted and so I stopped everything to launch my own brand. My watches are a measure of all that I love: aircrafts and cars.

How do you select your celebrity partners?

Whether it’s Nadal or Felipe Massa, when they decided to be associated with my brand it’s not just to serve as brand ambassador but it’s to actually wear my watches while they are in the field. As a watchmaker you must be ready to go to the battle. Therefore my watches are extremely light, shock resistant, comfortable and easy to read the time.

How has your business model evolved over the past 12 years?

My business model on paper looked like bankruptcy! Everybody thought that I would fail because I’m not a watchmaker and I wasn’t born in the 18th Century. When my first watch came out it was double the price of everything that already existed on the market and everybody said, ‘a brand coming from nowhere, a product that is extraordinary but so different from the culture and twice the price, it cannot succeed.’ But in fact this difference made it a success.

The most important thing was that I wasn’t looking for volume and still today the volume is small, nothing has changed.

How do you determine the cost of your watches?

I think by far I am the most expensive brand in the world. This is due to the product development. When I decide upon the cost I’ll access the level of difficulty that went into making the watch and I’ll decide on how many watches I’ll release, whether its 10, 20 or 50 models, that’s it.

How long does it take to develop and produce each new model?

It depends on the level of difficulty. It could be anything from two to three years to six or seven years, which has been the longest. One of the models that I’ll launch this year for example is a watch that is totally transparent (RM 037). This is an idea that I had 15 years ago but at that time the technique didn’t allow me to do it. I refuse to put a time frame on it. From the beginning, I was ready to suffer delivery problems; I had anticipated that so I was never taken by surprise financially.

In 50 years will your watches still be a worthy investment?

Experts from Christies or Sotheby’s have told me that my watches have all the criteria for a good investment: quality, authenticity and rarity. You don’t find many Mille watches on the second hand market and this is a fantastic sign. However, from the small number I’ve seen, they’ve kept their value. Many of the people who bought my watches in the beginning didn’t lose any money when they sold them, although I did increase my prices a lot. For example, today the RM002 model costs US$300,000 and when I launched it was US$120,000 this is because the costs increased every year so the watch has suffered an increase in price. But any of the RM 002 in the second hand market could easily be sold for $150,000-$200,000, so it means that you can make a profit with this watch.

How do you maintain the pace of growth within your company?

The growth goes hand in hand with the difficulty of manufacturing my watches. I know more or less that I can sustain 10 to 20 percent growth each year without too much headache but over that it’s technically impossible unless I change my strategy, which I don’t want to do. My concept has remained the same, its based on three pillars; technique and innovation to push the limit of design, the best of artistic and architectural dimension that can reveal the technique and at the same time my vision of luxury is light weight, easy to wind, easy to read the time, basically the contrary of a bling bling watch. The third pillar is the best of the Swiss watch culture, at the minute everyone is trying to reduce the costs but for me everything stays the same. I won’t compromise. Everything is still done by hand, regardless of the cost. It’s my legitimacy.

Have most of your customers been unscathed by the financial crisis?

Which market has the strongest demand for your brand?

Like everybody I look to Asia but I also have a very strong market in Europe and in the Americas. I’m lucky enough to have a demand that is stronger than what I can manufacture. I know that in my boutique in Beijing people are screaming because the windows are empty but I don’t mind, it’s like that. I don’t create the shortage but the shortage is there. I could send all my products to Asia and sell them but I don’t want to do that.

How is the RM brand performing in the Middle East?

We distribute in Dubai, Qatar and Kuwait but we are not very strong in the Middle East yet. We’ve sold a few tens. It could be that they go for more traditional brands. However, there are more and more sophisticated people in this region and their watch knowledge is getting stronger. The people are also getting very much into collecting; there aren’t many but more and more are starting… there is good potential.

Richard Mille watches are sold at all Ahmed Seddiqi stores within the UAE.