Vietnam’s splendour reveals its gateway to its past.

Vietnam conjures up so many emotions. The romance and mystery of the ancient tales and temples, the sorrow and loss of the Vietnam War and the evident pride as this modern country becomes a thriving tourist destination all swirl together like the swarms of scooters that congregate around every intersection in the cities of Ho Chi Minh and Hanoi. These two cities top and tail a vertical route between the old South and North sections of the country. Most tourists fly into one and out of another, taking in some of Vietnam’s stunning, rice paddy dotted coastline or ancient mountain towns along the way.

Starting in the south, Ho Chi Minh is a metropolis that never sleeps. From the Parisian Notre Dame Basilica and the modernist looking Independence Palace to the bustling back alleys, where tiny restaurants pop up and pack down in moments, red stools populate the pavement and entire families gather to eat on the go, the city is an assault on all your senses. Dive into the local cuisine with a street food tour on the back of a motorbike with XO tours and discover the pancakes and Banh Mi stands that make this city tick.

It might be slow but the only way to travel in Vietnam is by train. From the old Communist carriages the landscape becomes more verdant as you chug north. Stop for a beach break at Nha Trang or Mui Ne, both are cosmopolitan resort towns where you can do as much or as little as you want. When you’ve recovered, take the train to Danang, the closest town to Hoi An, Vietnam’s piece de resistance. This well preserved medieval trading port gives you a glimpse into Vietnam’s beautiful past, Hoi An was considered to be the trading heart of all of Asia. Hire a bike and explore the cobbled streets, humpback bridges and lush paddy fields at your own pace.

Further north from Danang sits Hue, Vietnam’s former capital. A huge 19th-century citadel stands tall with distilled importance, and embraces the Imperial City – once home to the Emperor and the royal court. Cycle along the Perfume river early in the morning to explore historic Hue, before trying some of the locally renowned Bun Bo Hue (a comforting noodle soup like Pho).

Hue is the perfect place to stop to explore rural Vietnam. By the coast, there are lagoons like Tam Giang, flower farms and pretty villages, to the west you’ll find mountains and temples – either way, life doesn’t seem to have changed for centuries and agriculture still rules the ebb and flow of daily life. Take a day tour to try your hand at fishing or steering a sampan boat on the lagoon as well as getting to visit rural communities. Vietnam really is a country of two halves in so many different ways, but one of the most evident is the difference between the countryside and the cities.

Finally end your trip in Vietnam’s modern capital, Hanoi. French Indochina was ruled from here but it has been a city for one thousand years. Today it’s a heaving, hustling sort of place with tiny pockets of calm. One such pocket is the Imperial University and temple of Confucius, which was built in 1070AD and taught scholars from all over the country to strict and exacting standards. Today its various courtyards radiate peace and prosperity and act as an ornate balance to the austere façade of Ho Chi Minh’s Mausoleum. 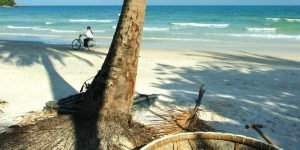 This tiny island, an hour’s flight from Ho Chi Minh, shouldn’t be discounted just because it’s where the country makes all of its ubiquitous ingredient, fish sauce. A local best kept secret, this is the place to explore deserted beaches, load up on fresh grilled seafood at the lively night market or dive the An Thoi islands, a group of 15 islands just off the south coast of Cambodia. And best of all, it’s a spot of relief from the scooter-crazed cities. 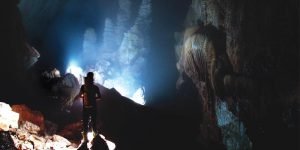 If you plan ahead, try and get a ticket for Hang Son Dong in Phong Nha-Ke Bang National Park, otherwise known as the largest cave in the world. A tiny percentage of visitors are allowed inside to drink in this amazing site that was only discovered less than 20 years ago. Stretching over 5.5 kilometres, the cave roof sits 200 metres above the ground and it has its own river, beach, weather and eco-system. 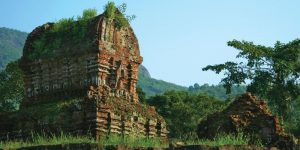 Stop at Da Nang and veer off the tourist ping pong route between Hanoi and Ho Chi Minh for one of the most interesting Hindu temple complexes at My Son. While much was bombed during the Vietnam war, there’s enough left to revel in what once was a glorious shrine to Shiva, constructed over 1,000 years from 4th century AD. Unlike Angkor Wat or similar, there’s enough space to take decent photos and explore this majestic crumbling ruin at your own pace. 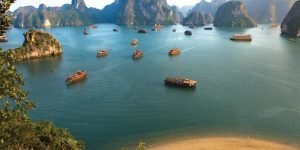 You can’t not go to Halong Bay should you step foot in Vietnam. Named ‘descending dragon bay’ legend goes that a Mother Dragon dropped emeralds from the sky to help ward off an invasion when Vietnam was young, these have turned into the 2,000 limestone islets and islands. Most of them are uninhabited but the stunning bay is home to four floating fishing villages, as well as a couple of hotels on the bigger islands. The best way to see it is on an overnight traditional boat trip. 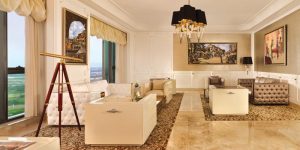 Ho Chi Minh has never looked so good as from one of the magnificently glitzy suites of The Reverie. Start or end your Vietnam trip with the country’s most decadent skyscraper stay, a testament to the luxury travellers the Communist country is attracting. Try their new Haute Ho Chi Minh package, which combines a three-hour personal shopping experience with a journey in the white marble spa, hailed by CNN recently as one of the best in the world. 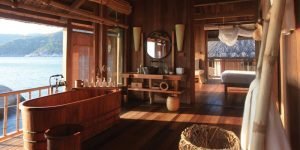 Halfway up the coast of Vietnam at Nha Trang veer off over the sea to discover the organic paradise of Six Senses Ninh Van Bay. Secluded villas inspired by traditional Vietnamese design are strung along a half moon crescent of perfect golden sand. Dive into the still waters while forested rock formations stick out of the East Vietnam Sea like a quieter Ha Long Bay. Sit back at sunset on the wooden decks built into the hills and let the natural beauty of Vietnam overtake you. 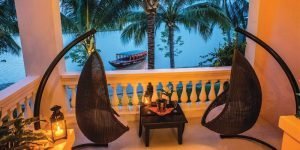 Asian spa brand Anantara has a laid back outpost in the UNESCO heritage city of Hoi An, arguably Vietnam’s prettiest city. French culture is fused to ancient temples and tiny streets house hundreds of tailors willing to knock up a new wardrobe in a matter of days. Sat riverside, Anantara Hoi An evokes a minimal colonial style in keeping with the historic town standing on the banks of the River Thu Bon with open walkways, and tropical gardens that flank the river.