Georgia, a country with a rich and complicated history and arresting natural beauty

Before becoming independent from the Soviet Union in 1991, Georgia had a long and rich history that was strongly entwined with its neighbours – Russia to the north, Persia to the southeast and Turkey to the west. This melange of influences, a collision of Europe and Asia, is reflected in the country’s unique architecture, art and food. But Georgia’s most valuable asset is its natural landscape, a terrain with such striking beauty, it is easily one of the most gorgeous places on earth.

Georgia’s deeply complicated history is full of contradictions. Over the centuries, it has been ruled by empires of the Mongols, Persians and Arabs but the spoken ancient Kartvelian language has obscure roots and is related to no other on the planet. In the past century, it was a favourite holiday destination for the Russian elite, attracting artists and writers. The poet Alexander Pushkin called it “the fabulous land”. But it is also the birthplace of the dictator Josef Stalin, the country’s most notorious son.

Post-independence, Georgia underwent a period of corruption and economic stagnation. Due to severe electricity shortages, the country spent much of the 1990s in darkness. President Eduard Shevardnadze (also the former Soviet foreign affairs minister), was ousted in 2003 with the Rose Revolution, when there was a change of government, but internal strife continued with the separatist regions of South Ossetia and Abkhazia, resulting in a brief, disastrous war with Russia in 2008. In recent years the country has tried to move past its violent history, look westward and develop its tourism potential. 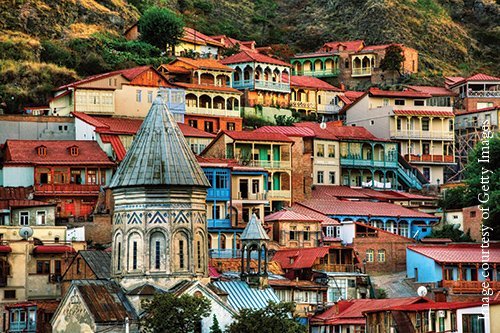 Travellers who venture here will not be disappointed. Outdoor enthusiasts will delight in the numerous hiking, walking, horse and mountain biking routes that snake through this picturesque country. Summers give the opportunity for paragliding and white water rafting and in the winter, ski resorts proliferate the Caucasus.

Georgians are warm and welcoming. Local wine is abundant (some historians consider this the birthplace of wine) and tables are laden with food that is sublime – grilled river fish, dumplings of ground meat seasoned with spices and khachapuri – oven-baked bread topped with oozing mountain cheeses. You can forego restaurants for an extraordinary food experience as the roadsides are full of women selling dried fruit, wild honey and freshly plucked fruit.

The landscape is breathtaking. In the summertime, the lush hills of the Caucasus are carpeted in moss, green grass and wildflowers, their scent lingering in the air. The mountains have deep cleaves running through them, as if a deity has run fingers up the terrain, creating shimmering waterfalls, brooks and pools of celadon. There are intermittent signs of human existence in this otherworldly land with remotely perched medieval monasteries. These images will remain in your consciousness long after you have left. 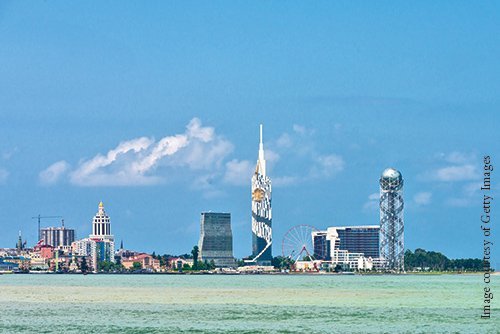 This is Georgia’s prime wine-growing region with lots of vineyards to visit, some even with overnight stays. Every village grows its own variety of grape. Once an independent kingdom, you’ll find splendid examples of medieval architecture in the region’s churches, mansions and castles. The harvest season, in September or October, is accompanied by many feasts, celebrations and festivals.

A remote, isolated medieval region in the high Caucasus that has resisted outside influences, with residents retaining their traditional way of life. The region is rich in church art with many of the tiny village churches boasting frescoes 1,000 years old. Some regard Svaneti as the most authentic part of the country.

The capital is a city full of hints of its past as a Eurasian crossroad. Winding lanes, old houses with balconies, stone churches and numerous bars and cafes teem with people. The city is paving its way into the future with many prestigious building projects including five-star hotels, shopping malls and leisure facilities.

A semi-tropical town on the Black Sea coastline filled with holidaymakers and buzzing with a party atmosphere during the summer. Batumi, with its charming fin-de-siecle architecture, developed in the late 19th century as the western station of a railway. 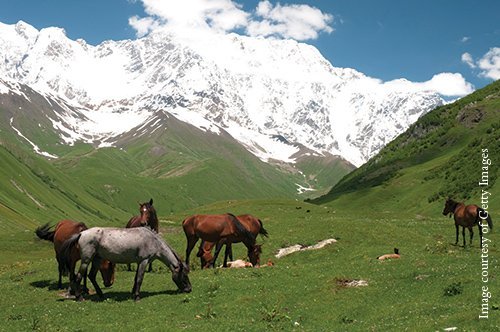 The sleek hotel, a striking structure of wood, glass and steel, features 156 rooms, all with views across the dramatic Caucasus mountain range with peaks that reach 5,000m. Relax in the cosy bar with its own fireplace or the sweeping sun terrace that provides a magnificent vantage point to soak in the rugged surroundings.

Perched atop the old town of Tbilisi, this hotel is located just below the city’s landmark, the Narikala fortress. With modern amenities in a medieval setting, there is even a small museum in the lobby where you can find archaeological artefacts unearthed during the construction of the hotel.

Some say this is the region where wine was invented. The rooftop terrace commands spectacular views of the Alazani valley. The restaurant specialises in European and Georgian fusion dishes and boasts a superb Georgian wine list. The hotel organises tasting trips to nearby vineyards.