GC rounds up three elegant staycations in Dubai, Abu Dhabi and Ras al Khaimah that are more than home away from home.

With a long weekend approaching and near-perfect temperatures in the UAE, why celebrate National Day anywhere else? These are the luxury hotels in Dubai, Ras al Khaimah and Abu Dhabi that you should check in to this weekend.

Initially designed with luxury residential apartments in mind before the Hilton Worldwide took it over in 2013, The Waldorf Astoria Ras Al Khaimah has some of the largest rooms in the UAE and at just 50 minutes drive from Dubai, its the perfect home from home weekend destination. The 346 deluxe rooms and suites reflect the hotel’s palatial surroundings with each room spanning 72 square meters, complete with panoramic views of the Arabian Sea, championship golf course and the stunning Al Hajjar Mountains on the horizon. 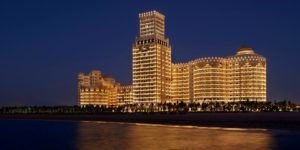 As one of the oldest luxury hotel brands in the world, the Waldorf Astoria takes pride in its stature, as well as the refined experiences it offers guests, whether its afternoon tea in the famed Peacock lounge or a morning driving experience around the winding mountain roads in one of its supercars – the hotel offers an impressive roster of supercars which are stationed outside the main lobby including McLaren, Lamborghini and Ferrari to its more high-octane guests.

However, if relaxing is more your thing then there’s plenty on offer too, guests can zone out in one of the private cabanas in the chic adults-only pool which also overlooks the resort’s long stretch of white sandy beach or if its family-time you had in mind, then dive into the more spacious kid-friendly pool for a few laps.

The dining options are just as diverse, the hotel’s New York steakhouse Lexington Grill is famed for its range of air-dried beef cuts which cannot be found elsewhere in the Middle East, as well as their impressive wine cellar. Try UMI for fresh sushi and teppanyaki and have your cocktails prepared right at your table or if you favour Middle Eastern cuisine Marjan is the resort’s elegant fine dining restaurant with oversized velvet chairs and modern art pieces by Iranian artist Sasan Nasernia.

Breakfast is an equally grand affair with an international buffet at Qasr Al Bahar, guests can have their morning coffee outside on the terrace overlooking the Arabian Sea before hitting the spa or gym.

The 33-storey luxury hotel that opened in the summer this year in Al Habtoor City has 365 guest rooms and suites. The hotel located in the Business Bay area has glamorous neighbours by way of the St Regis and the Westin. This is the brand’s second outpost in the Gulf, the first being the W property in Doha. For those checking in here at the Dubai hotel, expect to complete the check-in formalities on the 30th floor instead of ground level. 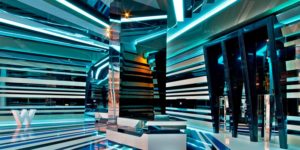 And you won’t be handed a set of keys to go to your room – your phone doubles up as the access device to your room. Expectedly, there’s plenty of dining options by way of Mediterranean food at Level Seven as well as Namu, a Korean and Japanese hybrid restaurant.

Part of the sprawling 4,200 hectares of the Arabian Wildlife Park, the clutch of villas here in this resort are properly fenced. The views from your room won’t be that of another skyscraper, but instead expect to wake up to the sights of gazelles and the sounds of peacocks. Some villas have pools attached to it, while a few also open out directly onto the savannah. The restaurant here is aptly named Savannah Grill & Lounge and it specializes in steaks and seafood. If you want to cut loose from the city, though yet not travel too far away – and you are of course enchanted by nature and wildlife – the is the place where you’ll want to hide away for the weekend.