We go inside The Shelbourne, Dublin

The Shelbourne Hotel has been Dublin’s showpiece since it opened in 1824. The property has borne witness to some of Ireland’s most monumental moments in history, it’s where the first national Irish constitution was drafted overseen by revolutionary hero, Michael Collins and it’s where true Hollywood stars like Elizabeth Taylor and Richard Burton called home when they were visiting the emerald isle. While its bedrooms and suites have been recently renovated to modernity, the hotel’s classical style and heritage has remained untouched. The property even houses its own museum, filled with memorabilia of its colourful past. 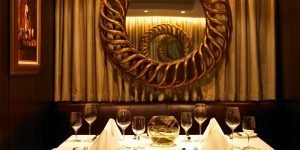 The signature red-brick Victorian façade of The Shelbourne is located on the northern side of St Stephen’s Green, Europe’s largest square garden public park and sits on the doorstep of many of Dublin’s highlights. The historic hotel is surrounded by 17th century homes and has The Little Museum of Dublin and the National Museum only a few hundred yards away. The city’s retail haven, Grafton Street, which also houses many chic cafes and restaurants is also nearby. There is also a charming concierge on-hand to help guests plan their daily activities. 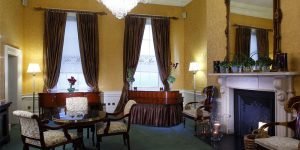 Similar to the hotel’s doormen, the entrance lobby is befitting to its place in Irish high society and reflects its stature as a living work of art itself. The most striking piece of artwork in the lobby of the Shelbourne is a large Louis Le Brocquy tapestry, entitled Cuchulainn VII, perched above a restored marble fireplace. Other historic artworks feature in the reception lobby of characters from Samuel Beckett’s ‘Waiting for Godot’ play. As the centrepiece of the hotel, the lobby also houses the main bar, The Horseshoe Bar- a low-lit and moody meeting place with red-accentuated décor that is perfect for a quiet tipple. No.27 is the hotel’s airy bar and lounge that is usually bustling with guests and non-guests alike. The Saddle Room restaurant is an elegant eatery serving steak and seafood and the Lord Mayor’s Lounge, serves afternoon tea to weary guests after a long-day of pounding the Dublin streets. 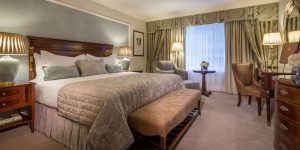 Now a Renaissance Hotel by the Marriott, the 5-Star property has 265 bedrooms including 19 suites, many named after well-known guests including Princess Grace, John F. Kennedy, and Irish politicians Michael Collins and Eamon De Valera. Rooms are contemporary without compromising on their historical importance. Each suite features a window seat with uninterrupted views over St. Stephen’s Green and is tastefully decorated with hues of green and brown and stunning Waterford Crystal chandeliers hang throughout the living area and bedroom with antique mirrors and Celtic-themed embroidered drapes. Bathrooms are spacious and decked out in white marble with a sunken bath and walk-in shower filled with Elemis spa products.