Honeymooners and couples famously flock to the Seychelles to surround themselves with boundless luxury, drawn by the silky white sand beaches that stretch from coastline to coastline of the 45 granite islands of this tiny Indian Ocean sovereign state. But after the initial excitement of doing nothing wears off, withdrawal from our constantly charged lives soon kicks in and suddenly the indoor gym looks appealing.

That’s where the Seychelles eclipses its Indian Ocean archipelago rival, the Maldives. The tropical climate, coupled with a verdant mountainous landscape, provides the perfect backdrop to energise and reconnect with nature without straying too far from the confines of five star comforts.

Rather than feeling confined to one small island for the entire length of your stay, it is easy to hop between the three main islands of Mahé, Praslin and La Digue. For a more secluded but equally diverse experience, North Island is accessible by a privately chartered plane or helicopter. Each one has its own unique atmosphere, distinctive beaches and inimitable wildlife.

You can see everything from timeworn giant tortoises living in the middle of the road on a picture perfect North Island, where a 40-year conservation effort is ongoing to return the island to its natural state of two centuries ago, to the maternal instincts of a turtle, returning to hatch her eggs underneath your sunbed on the Grande Anse beach in Praslin’s Constance Lemuria resort. One day you could be ziplining through the forest in Mahé, the next snorkelling with reef fish around the tiny island of St Pierre, just off the north-east coast of Praslin. There really is nowhere quite like it. 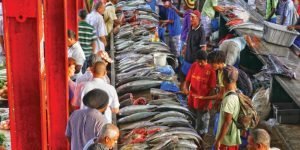 Tourism is the backbone of the Seychelles economy with very few industries thriving beyond foreign real estate investments and hospitality. The Seychelloise import 90 per cent of their goods and have only enough agriculture to sustain a population of just under 100,000. However, tuna exports to Japan to meet its insatiable demand for sushi and sashimi are thriving. If you want a flavour of what the locals eat in the Seychelles, go to the Sir Selwyn Selwyn Clarke Market in Victoria, the sleepy capital of the Seychelles. Originally built in the 1840s and refurbished in 1999, the market opens six days a week and is lined with inter-generational fishermen all competing to shout the loudest in seselwa (Seychellois Creole) to sell that morning’s catch usually consisting of jobfish and tuna. Meanwhile women on bicycles fill their baskets with bat fruit and local cinnamon sticks, a staple in Creole cuisine, especially curries.

Creole food is not exclusive to the Seychelles. It is usually known as Louisiana-style soul food but in the Southern hemisphere, the Indian Ocean version veers toward Asian flavours and influences. Soy, garlic, ginger and chilli are the dominate flavours of Seychellois cuisine and most restaurants, whether fine dining or beach cafes, will serve a variation of a spicy tomato-based creole sauce with fresh fish or crustacean coupled with a staple of white rice for lunch and dinner.

MUST SEE AND DO

La Digue is an island where time stands still. You can arrive on a privately chartered, sleek black ZilAir Eurocopter but once your feet hit the powdery white sand, you cannot help but fall in line with the traditions of the past. There are few cars on the island, so travelling by oxcart or bicycle is the best way to explore. Start with the beaches, which are among the best in the Seychelles – Grand Anse, Petite Anse and Anse Source d’Argent, which is strewn with pink granite rocks. For snorkelling, pedal over to Ile Cocos. 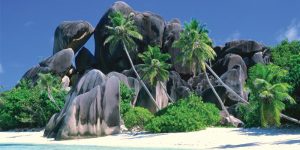 The steep hillside cliffs overlooking the stunning bay at Port Launay form the perfect backdrop to test your nerve as you glide though a series of adrenalin-pumping zipline rides. They zigzag through the treetops covering the forest within the sprawling Ephelia resort. Take a golf buggy to the top of the hillside and enjoy the dramatic views of the ocean as you glide down under the watchful eye of your instructor. 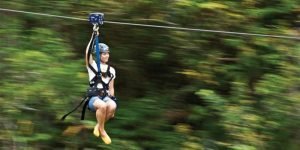 The coco de mer nut is one of the Seychelles’ most treasured natural commodities. The nature and origin of the produce of the indigenous coco de mer palm tree is a mystery, other than as an ingredient in Chinese medicines. Vallee de Mai, a forest on the island of Praslin, is home to about 6,000 coco de mer trees and is a protected UNESCO world heritage site. For hundreds of years, before the rest of the Seychelles were even discovered, it was believed by some to be the original garden of Eden. Its hauntingly beautiful primeval forest is among the botanical wonders of the world. 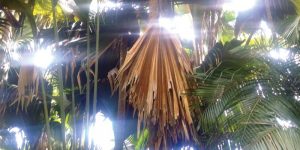 Eden island was built just off the coast off Mahé to service wealthy foreigners and their superyachts of up to 115m. Many of the yachting set have since invested in seafront mansions on the island. The architecture is distinctly urban yet draws heavily on traditional Victorian influences with large verandas and open rooms looking out over the ocean. The newly developed marina is a renowned after-dark spot, packed with restaurants serving fine Creole food (you will not find a franchise in sight) and for those who fancy a flutter, there is a casino to while the night away. 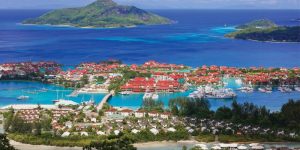 With its breathtaking views over the Port Launay national marine park, snow white beaches and luxury suites and villas, the Constance Ephelia Seychelles is in a class of its own. In addition to numerous restaurants, the sprawling resort offers a variety of leisure activities. The turquoise sea is ideal for diving and snorkelling while you can be pampered either in Le Spa de Constance – the Seychelles’ largest, sprawling over 5,000sq m – or if you prefer a more intimate experience, try a treatment in your own villa with private pool and treatment room. 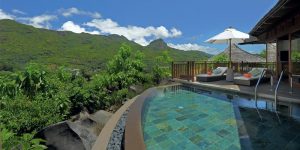 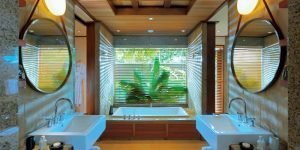