Brazil’s been a hotspot for tourist over the last few years. Mega sporting events like the FIFA World Cup and the Olympics coupled with economic factors like a weak Peso made travel to Brazil nearly 30 per cent cheaper compared to the previous years were catalysts in making Brazil the go-to destination over the last two years. The resulting boom in the tourism industry has also meant that a number of luxury hotels have blossomed in key cities around the country. One of the most recent ones is the newly re-launched Palácio Tangará that will be officially opened by spring 2017 now owned by the German brand, The Oetker Collection.

The Oetker family that have featured often in the top 100 Forbe’s list of billionaires are a household name in Germany – quite literally. They are well-known manufacturers of frozen foods and baking powder that’s sold around the world. The Oetker Collection, the hospitality wing of the group, has a clutch of nine five-star hotels spread around the globe from the Château Saint-Martin & Spain the French Riviera to The Frigate Island Private in Seychelles. Their latest addition, and their first in South America, is the Palácio Tangará in São Paulo. 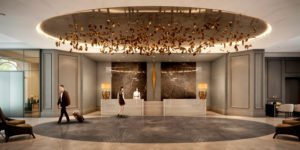 The 141-room hotel, that includes 59 suites, has just opened bookings from spring next year. Jean-Georges Vongerichten, whose restaurants have been no stranger to Michelin stars will be in directing all things culinary at the hotel. This includes curating the wine cellar, setting up the signature restaurant and lounge bar, as well as deciding the highlight of every hotel – the chef’s table. The group is also designing exquisite banquet rooms should you want to make this hotel part of a destination wedding.

While you plan ahead for your next trip to Brazil, take a look at some of the images in the gallery above to see what lies in store at this upcoming luxury five-star hotel.