Heading to Mexico City Grand Prix at the end of this month? There’s a sleek new hotel suite to check into for the race weekend. Hilton, the official partners of the McLaren-Honda Formula 1 team, has unveiled a new motor racing-themed suite at Hilton Mexico City Reforma.

The suite has reportedly been designed with specific inputs from the team’s two drivers, two-time World Champion Fernando Alonso and teammate and 2009 World Champion Jenson Button. 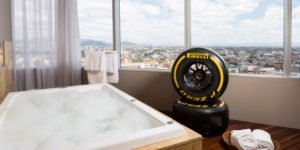 Pirelli race tyres are placed around the suite.

Inside you’ll find F1 memorabilia including the actual racing suits worn by drivers. There’s also a real steering wheel from a McLaren-Honda racing car in the suite.

And just to make it as authentic as possible, there are Pirelli tyres stacked around the suite in the living room, bedroom and even the bathroom. Taking the level of quirk up a notch are the bathrobes that are monogrammed with the names of the two drivers on the back. 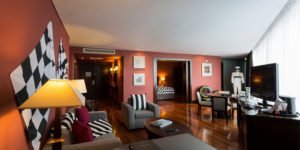 Fernando Alonso and Jenson Button collaborated with Hilton on the suite’s interior design.

There’s a large chequered flag on the wall of the living room and the bedroom’s upholstery is done up in a similar theme. The cushions and comforters in the suite also have a black-and-white tyre tread motif.

Priced at $390 a night, expect there to be a significant premium on it when the world’s fastest sport comes calling in Mexico.