ONE OF EUROPE’S MOST ATMOSPHERIC AND BEAUTIFUL CITIES

Portugal‘s capital was originally named Allis Ubbo by the Phoenicians, meaning ‘calm harbour’, thanks to its idyllic location on the banks of the Tagus River. The city subsequently fell under the rule of the Romans and the Moors before eventually being captured by European crusaders.

Each ruling dynasty left their mark and Lisbon’s neighbourhoods have their own unique character, from the grand 18th-century buildings of the lower town to the labyrinth-like streets of the oldest district, Alfama, that sits at the base of the Moorish Castelo de São Jorge. Rebuilt after the earthquake and tsunami of 1755, much of that historic era of reconstruction remains. Today, Lisbon continues to expand along the banks of the River Tagus, towards the Costa Caparica heading for the Atlantic.

Winding your way through the city, you’ll pass rows of houses in warm shades of orange, yellow and rust red. Washing is strung from wrought iron balconies and window boxes overflow with flowers. Weaving their way through this pretty patchwork are the city’s trams, the favoured mode of transport of Lisbonites and a great way to hop between the different districts.

Lisbon has plenty to offer, with a plethora of museums and galleries as well as beautiful buildings covered in iconic azelujo tiles. The city is built on seven hills, each one offering spectacular views over the city and the River Tajo. It is also known for its lively restaurant scene and there are plenty of places to stop, sip a coffee and savour a Portuguese custard tart while watching the world go by. 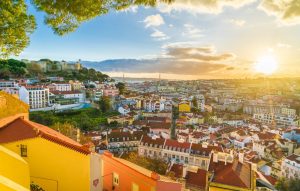 As this wide river, flowing into the Atlantic, was the source of Lisbon’s wealth from fishing and trade it makes sense to begin with a stroll along the bank of the Tagus. 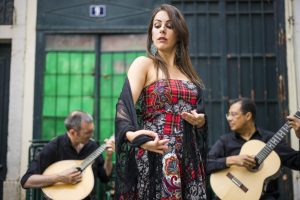 As Janelas Verdes is an 18th century townhouse and was once the home of famous writer Eça de Queiróz. It is one of five Lisbon Heritage Hotels. This 29 bedroom boutique hotel is located between the chic neighbourhood of Lapa and the design district of Santos, giving spectacular views over the River Tagus.

The hotel is located on Rua das Janelas Verdes, a characteristic street of Lisbon, a place with antique palaces, churches and convents converted today.

Alfama and Bairro Alto are two historic areas, both clinging to the sides of the steep hillside rising from the river. They both epitomise Old Lisbon. Walking tours are the best way to learn the secrets of these two charming neighbourhoods.

Cobbled twisting narrow seats almost pedestrianise these two regions of Lisbon, cars are rare. Cafes and restaurants spill over onto the cobbles.

Lisbon displays a wealth of art in its numerous museums, from a museum of antiquities through to the museum focusing on contemporary art.

Undoubtedly, the Museum of Art, Architecture and Technology (MAAT) at Belem has the most spectacular construction. Sinuous white curves arise from the river bank to cradle its contemporary exhibits.

Taking the train from the Cais do Sodre station not only takes travellers to MAAT, Belem is also the rail station for the Monument to the Discoverers. It is a favourite escape from the city at weekends for Lisbon folk. Bikers, walkers and skateboarders can take in views of the 25th April Bridge, that celebrates the revolution that overthrow dictatorship in 1976. They can also look across the river to the towering monument to Christ.

Belem celebrates Portugal’s golden age of exploration. In the 15th and 16th centuries, Portuguese caravels sailed east, west, north and south. A globe, represented in the floor tiles, records the historic voyages of these brave explorers at a time when many still believed that the world was flat. 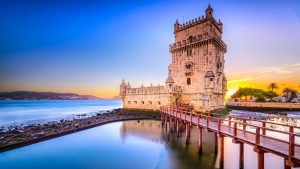 Walking away from the River Tagus and crossing the road, The Jerónimos Monastery is another of Belem’s sights to see. Its spectacular Late Gothic Manueline architecture encouraged UNESCO to award World Heritage Site status.

The Monastery replaced a dilapidated church where monks had aided travelling seafarers.

Get back on the train at Belem and head west for a few stops. One option is to alight at Estoril, a well-to-do seaside resort that hosts both a casino and grand prix.

It is only a 40-minute stroll, west along the promenade, to another stylish resort. Cascais has a beach, harbour, numerous restaurants, and a fascinating lighthouse museum.

Late at night, throughout Lisbon, the lights are dimmed, and it is time for fado. The fadistas sing of times of trouble and woe. Fado is Portugal’s take on the blues, the songs for when people have had a hard day, a hard life.

At Ofai, a fado restaurant in Bairro Alto, sad songs have been sung since the restaurant opened in 1947. Usually there are three sets, where acoustic guitarists accompany the singers, whilst fado is sung.

Lisboa Social Press is run by Tom and Jilly, two English artists now working from their Lisbon studio. They offer regular workshops where visitors can drop into develop their creativity and artistic skills.

One workshop shows guests how to develop linocuts, in the tradition of the Azulejo tiles, to print onto cards and postcards. 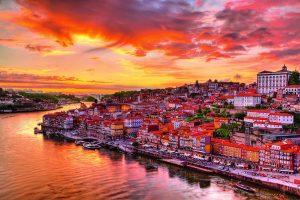