There are few better spots to moor your yacht than Hvar’s star-studded shores.

Yachts bob idly on baby blue waters, sunlight drenches the harbour and the early risers sip espressos behind their morning papers, pausing only to glimpse the bronzed bodies beginning to saunter along the palm-lined promenade. In Croatia’s port of Hvar, summer mornings are a late and lazy affair. Cruise in by nightfall and you’ll see why: from June, the harbour is rich with the well-known and well-heeled as swan-like yachts – fresh from island hopping across the Dalmatian Coast – slope in to soak up the party atmosphere and the Adriatic’s other ample delights.

Its newfound popularity is surprising when you consider just over a decade ago few had even heard of Hvar. War wreaked havoc across the six republics comprising the former Yugoslavia, leaving much of Croatia in a pitiful state of wreck and ruin. In its time, Croatia has had an influx of European invaders – the Romans, Slavs, French, Greeks and Ottomans among them – but, to its credit, has gleaned the best from each and every one and now presents jet setters with a rich tapestry of history, culture and cuisine – not to mention an insatiable appetite for celebration.

Today you’ll find Hvar populated by bikini-clad beauties and tanned men in pressed pastel shorts. During peak season, well-groomed Italians dominate – having declared it the ‘new Amal ’ – while on the water the most enviable vessel to spot is Beluga, a seriously glamorous, ebony-sailed Turkish gullet owned by actress-turned-hotelier and interior designer, Anouska Hempel.

Indeed, these shores are now very much on the mega-yacht itinerary. Roman Abromavich and Bill Gates have both cottoned on to the port’s charms, as have countless celebrities. Beyonce has holidayed here (a local tour guide says it is where she first saw a flower called blue ivy, the name later given to her daughter), Valentino sailed in – before sailing out again at the sight of the paparazzi – and Britain’s party-loving Prince Harry was photographed diving into a Hvar hotel pool, fully clothed.

Happily, there is more to Hvar than the size of your yacht: its paved chalk-white piazza, picture-perfect harbour and catwalk-like promenade open onto hip hotels, rooftop bars and chic waterside restaurants where the likes of Princess Caroline of Monaco, Eva Longoria and Kevin Spacey have been spotted dining. The local cuisine is superb and, unsurprisingly with shores like these, the most delectable dish is fish. Having only entered the European Union three years ago, Croatia’s waters have remained unspoilt by the rest of the continent’s greedy trawlers. There are thought to be some 400 sea creatures, from sizeable squid and giant hot pink langoustines to sea bass, bream and tender tuna.

Beyond the pleasures of the promenade, pebbled beaches and enchanting islets are ripe for exploring. If you don’t care to move the yacht (it is tricky enough getting a spot in the first place), a taxi boat can whisk you, wind in hair, to Palenki Otoci, an archipelago of 16 untapped islets. On dry land, hire a scooter and head up to the hilltop villages you can see from the terracotta-roofed dwellings below. A scenic drive takes you high above wavy coastlines, through tiny villages (with as few as four residents in Malo Grablje) on to Hvar’s least touristy town of Stari Grad, where you can escape the throngs.

With idyllic islets, authentic fare, beautiful people and high-end nightlife abound, you have to question why Valentino left so soon. 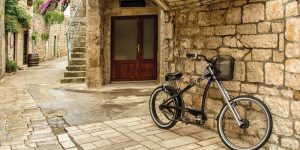 Founded by the ancient Greeks in 384 BC, not only is Stari Grad Hvar’s oldest town but also one of Europe’s most ancient. Despite such a claim to fame, you can meander here in relative solitude. Spend an idle day wandering its serene stone alleyways, punctuated by yellow, blue and green shutters, stop off at quaint street cafes for Dalmatian nibbles and cool off with ice creams in the sleepy harbour. 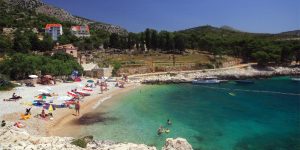 Most of Hvar’s pretty beaches will have you balancing on a rock and attempting to step onto a pebbled seabed while maintaining some decorum. But not the silky-sand beach of Grebisce. Narrow and sun-drenched, you’ll find it four kilometres east of Jelsa, just off the Sucuraj road. If you are not opposed to a pebble or two, make for Uvala Dubovica instead. Arguably the most charming cove on the east and set beside an ancient manor house, it is a popular pick with the yachting crowd. 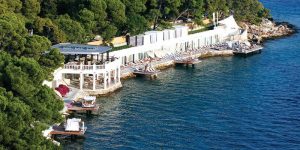 Where better to top up your tan than Hvar’s hottest beach club? Make for the Amfora Hvar Grand Beach Resort and you’ll find the 1920s white stone colonnade shaded under a pine grove on a small sandy bay. Kick off Havaianas to recline in a private stone cabana and have ice-cold bubbly brought to you by waitresses in crisp white miniskirts. 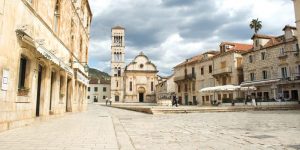 There is more to the marina than the promenade. It is nestled beneath a medieval castle, home to one of Europe’s most romantic piazzas and flanked by the continent’s oldest municipal theatre as well as a Benedictine convent. If you’re feeling generous, the harbour’s shops include several beautiful jewellery boutiques – be sure to step into Tanja Curin’s for stones combed from all corners of the globe. 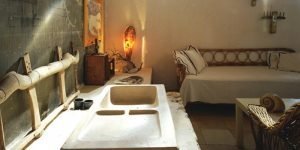 Sveti Klement, the largest of the Palenki Otoci islets just a short boat ride from Hvar, is home to Palmizana. Enter this bohemian hideaway and you will find an oasis of lush fauna and bold blooms. Owned by flame-haired artist Dagmar Meneghello, guests can stay in one of seven eclectic stone villas and six colourful bungalows. Do not leave without dining on its hot pink restaurant terrace. The Hvarska gregarda, a Dalmatian casserole swimming with lobster, potatoes and shellfish, is a must-try.

Rates from $263 per night in peak season. 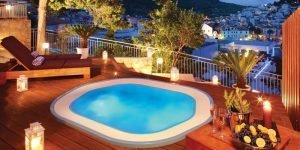 If you like your hotels to be in the heart of it, this is the place. A stylish, glossy bolthole set in Hvar’s pulsating heart and with spectacular vistas that stretch over the sea, beyond the marina and across the Old City. Make time for a dip in its rooftop seawater pool, spend a spell in its spa and enjoy a drink of something cool in its ever-popular marina-facing Top Bar. 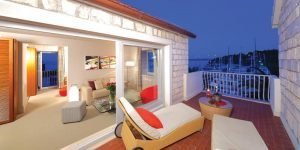 First opened in 1927, this promenade-sited hotel has long enticed a star-studded clientele, from Orson Welles to Jeanne Moreau and Sean Connery. Its monochrome and red rooms each pay homage to screen sirens with oversized portraits to the likes of Brigitte Bardot and Audrey Hepburn. The Riva marina suite is the best in the house. Check in and make the most of a glass-walled bathroom and private harbour-facing terrace.