From rainforest-clad mountains to storybook wildlife, tiny Costa Rica is the place for an eco adventure.

Few things sum up Costa Rica’s spirit like its coffee makers. The traditional chorreador consists of a simple wooden frame, carved from rosewood, with a soft cloth filter placed in the round hole. Then, slowly and deliberately, freshly-boiled water is poured over the grounds, drip-dripping into an aluminum pot below.

The result? One of the best cups of coffee you’ve ever tasted. Partly because the Latin American country grows some of the world’s finest, most flavoursome beans. But also because of the patience, simplicity and love that bursts from every sip.

This is the essence of ‘pura vida’, or ‘pure life’. This ubiquitous phrase is used as a greeting, to compliment anything from schoolwork to a delicious meal, and as a mantra that guides daily life. Nestled between Nicaragua to the north and Panama to the south, Costa Rica is the size of Denmark – yet packs in more attractions and raw, natural beauty than most countries twice its size. Its Pacific coastline is blessed with creamy, jungle-fringed beaches and candy-floss sunsets, while the less-developed Caribbean side boasts ‘mini-Amazon’ Tortuguero National Park, a tangle of canals accessible only by boat.

Around a quarter of the country is protected national parks, from dense rainforest to the mist-enshrouded cloud forest in the north.

Since the 1990s, when Costa Rica suffered from devastating deforestation, it has made a bigger commitment to sustainability and eco-tourism. It has even pledged to become carbon neutral by 2021.

In the most part, energy-guzzling resorts are eschewed in favour of laid back, barefoot luxury. The government provides incentives to landowners who preserve and maintain their forests. Hunting for sport, which had decimated species including scarlet macaws, jaguars and sea turtles, was also banned in 2012.

With gurgling volcanoes, deafening waterfalls, natural hot springs and wildlife straight from the pages of a children’s storybook, there is plenty worth protecting.

Villa Blanca, perched high in the San Ramon cloud forest, is part of the Greentique Hotels group, committed to sustainable tourism. The resort has recycling and water conservation practices in place, serves food made from local produce and hires most of its staff from San Ramon.

At Don Juan Farm, a coffee plantation in La Fortuna teaching sustainable farming practices, guides are armed with an arsenal of knowledge – and machetes. They use the latter to sever cocoa pods and papaya fruit from branches while showing tourists or groups of schoolchildren around.

The richest biodiversity is in Corcovado, on the southwestern tip. This is the wildest of Costa Rica’s national parks, roamed by curvy-trunked tapirs, big cats, anteaters and four species of monkey, including the endangered Geoffroy’s spider monkey.

Here you can also see the graves of those who once lived in the forest, panning for nuggets of gold in the rivers. Nowadays green- from emerald leaves to the glistening turquoise of a resplendent quetzal’s wispy tail feathers – is the country’s most valuable asset.

The perfect peak of Arenal Volcano, active until October 2010, dominates this national park in the La Fortuna district, one of the best areas for thrill seekers. Zip line through the treetops and over canyons, or cross the canopies via a series of hanging bridges. Hikers might spot jaguar, deer, parrot snakes and even the elusive, endangered resplendent quetzal. 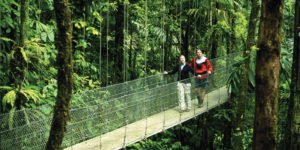 The fascinating capital is well worth a day or two. The Gold Museum, built underground in an inverted pyramid, showcases the metal-smithing and sculptures of pre-Columbian settlements dating back to 500BC. Tour the opulent 19th century National Theatre and stroll through La Sabana Park, where native trees are being reintroduced to draw toucans and parrots to the city. 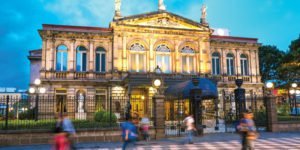 On the Nicaraguan border, this wildlife refuge is clustered around a milk-chocolate river, populated with storks, purple herons and ‘Jesus Christ’ iguanas, which skim over the water. Various companies offer boat tours, with expert guides pointing out white-headed capuchin monkeys swinging from branch to branch. 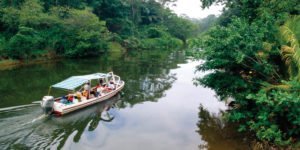 Perched on the Pacific coast, this is the country’s most photographed spot for good reason. Walk through the dense forest towards a curl of sandy beach, spotting long-nosed coatis, rare squirrel monkeys and zany-beaked toucans. Local guides locate sloths dangling languidly from high branches and bats snoozing in ‘tent’ houses constructed from leaves. 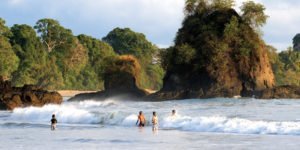 The grandest hotel in San Jose, this restored Victorian mansion has marshmallow beds, plush robes and period furniture, while some rooms have private patios and trickling fountains. The elegant lamplit restaurant with sunken bar is a local hotspot with couples huddling over plates of savoury crème brûlée.

Suites from $305 per night; www.hotelgranodeoro.com 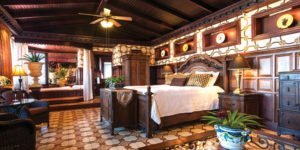 Every detail at this resort and spa in the cloud forest of Bajos del Toro is designed to encourage guests to reconnect with nature – and each other.The flawlessly chic cabins are tucked away for complete privacy. Floor-to-ceiling sliding doors lead to a decked patio and outdoor jet tub, fed by pure spring water.

Cabins from $250 per night; elsilenciolodge.com 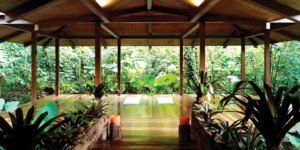 A holiday at this Guanacaste resort on the Pacific Coast comes with added adventure. Rates include unlimited sunset horse rides, kayaking through the mangroves and moonlit excursions to see nesting Olive Ridley turtles. Scarlet macaws, from the hotel-sponsored Ara Project for injured parrots, swoop past patios with whirlpool baths and plunge pools.

Villas from $575 per night; www.hotelpuntaislita.com 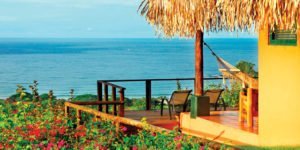