Anchored by mountains and situated at the meeting of two oceans, Cape Town is an achingly gorgeous city. The tree-lined cobblestone streets and charming colonial buildings are idyllic, but the poverty is never too far away. Still, the abundance of natural beauty is so dazzling, one can easily forget the country’s troubling past.

Sometimes blamed for being the least ‘African’ city in Africa, Cape Town is the only city on the continent where Africans are a minority. And although the architecture can easily fool one into thinking they’re in Europe, it’s the mix of people that gives the city its character. In one evening it is possible to dine in Bo-Kaap, home to the Muslim community, then watch Zulu entertainers while strolling down the V&A Waterfront, and finally party European-style in one of the chic clubs near Greenpoint. And, while the city can feel immensely energetic with the explosion of fashion, tourism, music and sporting events, there are still reminders of its history. Apartheid was banned in 1994, but the barriers towards equality will take much longer to disintegrate as evidenced by the city’s many townships.

A gourmands dream, Cape Town is the culinary capital of South Africa. Western culinary history dates back more than 350 years. It was founded specifically to grow food, and that heritage is reflected in the city’s cuisine. The style of Cape Town’s cuisine is similar to that in other places rich in local produce, such as California and Australia. Served freshly and simply, the cuisine also draws inspiration from South Africa’s multi-ethnic background including the Cape Malay and Indian populations.

The city’s surrounding areas are places of arresting natural beauty. The Twelve Apostles Mountain range stretches from the city’s anchor, Table Mountain, connecting the chic suburbs of Clifton and Camps Bay. Along the way, the landscape is lined by tiny secluded beaches and hundreds of cliff-side mansions overlooking the freezing Atlantic Ocean. The lush valleys and quaint wine-making towns of Paarl, Stellenbosch, and Groot Constantia connect the two ocean fronts. The warmer coast on False Bay reveals all the wonders of the Indian Ocean, multi-colored fish and plant-life. A place so inviting that whales gather here yearly to calve. Two hours further south and you reach the Cape of Good Hope with its cliffs of dizzying heights, and tormented waters. Cape Town, a region so beautiful, it seems unfair that one tiny part of the globe should have such an abundance of splendors. 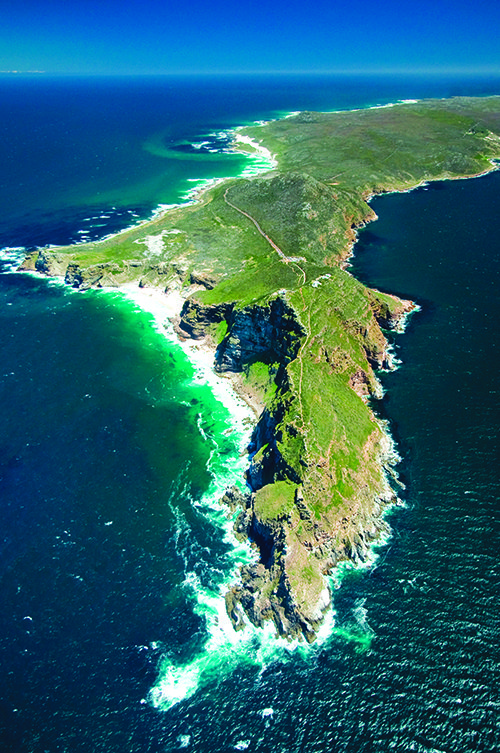 The museum pays tribute to a vibrant community of 66,000 ‘Coloured’ people that was raised to the ground by the Apartheid government and declared ‘White.’

A dramatic, long, craggy tip of rock, fabled to be where the Atlantic meets the Indian Ocean. A fabulous spot for hiking, secluded beaches and spectacular ocean views.

The industrial area of Woodstock has been given a face-lift with art galleries, boutiques and trendy restaurants. The centerpiece of the district is the Old Biscuit Mill,

a renovated Victorian mill complex, whose Saturday market is the place to be seen. Local vendors sell everything from clothing and crafts to fresh produce, wood-fired breads, organic wines and artisanal cheeses.

A string of charming winelands (Stellenbosch, Franchoek and Paarl) each prettier than the next. Grand manors, landscaped gardens, gourmet dining and some of the best Pinotage in the world.

As the only structure along this mountain range, the hotel monopolizes the spectacular views and an indigenous garden that snakes up the mountain. The décor is a modern take on colonial. The hotel’s 16-seat cinema shows movies five times a day, and the spa has the only Rasul chamber in the country.

Cape Town’s most iconic hotel has been welcoming celebrities and dignitaries since 1899, with its old world Colonial charm and lovely gardens. Their high tea is justifiably world famous.

Whales visit the shallow waters of Hermanus during the Winter and Spring, and it is possible to watch them breaching yards from the shore of this eclectic seaside hotel.

This stylish 15-room boutique hotel in Camps Bay overlooks the main beach. The palette is clean and modernist, with soft LED lighting, natural and eco materials combining to create a luxurious sanctuary.