For decades, strict military rule kept this tiny southeast Asian nation hidden from world view. Its lush landscapes, Buddhist culture and archaeological treasures were privy only to the most intrepid travellers drawn by its mysterious allure.

Much has changed since the military junta dissolved itself in 2008. One of the world’s most prominent former political prisoners and chairwoman of the opposition party, the National League for Democracy, Aung San Suu Kyi has mellowed her position on tourism in Myanmar (also known as Burma) from boycotting it to urging individual tourists to come if they go about their travels “in the right way, by using facilities that help ordinary people and avoiding facilities that have close links to the government”. The tourists have been steadily increasing ever since — from one million in 2012 to more than double that in 2013 and rising to 3.5 million last year. 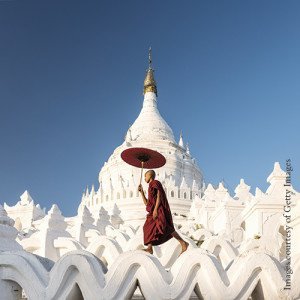 Myanmar, formerly known as Burma, is indeed open for business and like any country tiptoeing toward modernity, it is full of contradictions. Travellers expecting to find a remote and disconnected country will be surprised to find airport pick-up cars with wifi, plenty of cash machines and the CNN channel in hotels.

With a deeply devout populace, much of what there is to explore in the country centres on its spectacular shrines to Buddhism. Theravada Buddhist monks are ascetic, sworn to live without worldly possessions with exception to – it seems – the latest in Samsung technology. Even the majestic Shwedagon Pagoda, the most holy in Myanmar, is not immune to the sight of crimson-robed monks with shorn heads smiling and taking selfies. 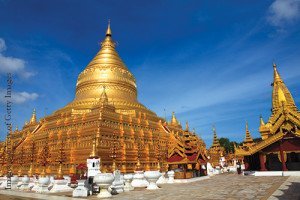 Yangon, the former capital, is a jumble of colonial era buildings, street vendors and urban lakes. Decrepit but with abundant charm, it is these streets that have inspired countless writers including George Orwell, Rudyard Kipling and Pablo Neruda.

Along the banks of the Irrawaddy river, the terrain magically turns from dusty to lush and life transpires much as it has for generations. Child monks play netball in the courtyard of a temple, their laughs a momentary respite from a lifetime dedication to piety. Fishing boats set out for the daily catch in the early morning. In the afternoon, locals gather in makeshift tea stalls, sipping their chai under the protection of the banyan branches overhead. With the absence of light pollution, the evening stars light up with incandescent brilliance. 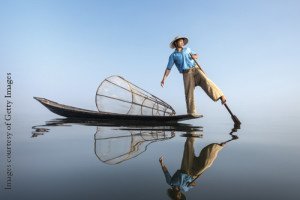 The city of Bagan is an archaeological wonderland with more than 2,000 scattered temples, stupas and pagodas dating from the 11th and 12th centuries. The more prominent temples will draw moderate crowds but it is easy to turn a corner and have a place entirely to yourself, free to discover exquisite details in nearly forgotten places— hidden frescoes, a carved door, a gleaming gilded Buddha. Find the right temple and you can climb its face to take in the spectacular sunset.

The sheer beauty of the landscape combined with an untouched quality is what makes Myanmar so special and at the same time, so vulnerable. Development often goes hand and hand with desecration and even on a smaller scale, there are few barriers to stop tourists from touching wall paintings, spoiling 1,200-year-old relics or exploiting the country’s truly warmhearted people. It is nearly impossible to leave the country without a deep connection to it and, inevitably, a sense of fearfulness about its rapidly changing future. 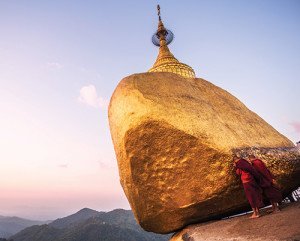 Located on the banks of the Irrawaddy river, this is an archaeological treasure trove of more than 2,000 Buddhist temples, pagodas and stupas scattered across the plain and dating back to the 11th and 12th centuries.

This glass-like lake in central Myanmar is interspersed with villages on stilts, island-bound Buddhist temples and floating gardens. Fishermen use paddles attached to one leg to row and navigate the watery paths.

The perfect way to end an adventure trip is by relaxing on the pristine white sands along the Bay of Bengal. Local fisherman bring in the catch of the day that is later served in the many restaurants and hotels popping up in this formerly sleepy fishing village.

Though the capital has officially moved to Naypyidaw, Yangon is still the capital in spirit with its charming jumble of colonial era buildings, temples, street vendors, urban lakes and parks. The glittering dome of the magnificent Shewedagon Pagoda dominates the skyline.

A colonial legacy, The Strand is housed in a restored Victorian mansion in Yangon with a white-washed façade, teak-framed windows, bamboo furniture and soaring ceilings. The scent of jasmine lingers in the air.

With 50 over-water bungalows, this hotel gives a sense of what it is like to live on the lake, albeit in the most luxurious way.

Situated on the edge of the archaeological zone, this hotel allows for easy access to the less visited temples to create a more personal experience of Bagan. The safari-style rooms are  luxuriously appointed.