Born to be Wild

Meru National Park in Kenya, immortalised in the book and film Born Free, has experienced a comeback since poachers were driven out

“Don’t take a picture of that, that’s not a lion,” says our safari guide.

My husband and I are in Meru National Park, a fertile savannah east of Mount Kenya, on my first game drive. We had just followed the fresh tracks, manoeuvred the Land Cruiser off-road, and there she was. I lower my camera. Could I be mistaken?

I look over at the lioness, lying on her side next to the watering hole with her ribs pushing through her fur, her mouth agape as she struggles to inhale. She is definitely nearing the end of her life. But she is a lion nonetheless.

Our expert guide, however, is interested in showing us a far more photogenic big cat. Which is understandable, given the park’s historic marriage of celebrity and lions. This is the site where conservationists Joy and George Adamson first successfully reintroduced their lion cub Elsa back into the wild. Their efforts were immortalised in the book Born Free, which was followed by the Oscar-winning 1966 film by the same name. 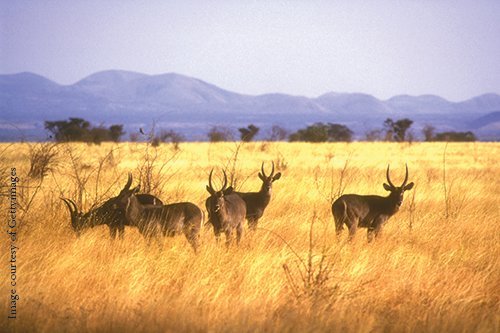 The Adamsons put Meru National Park on the Kenyan tourist map. In the early 1980s, it was a star attraction with up to 40,000 annual visitors. Sadly, the park became a target for poachers at the end of the decade and tourism started to decline. The park’s infrastructure nearly collapsed and large mammals were almost wiped out. In 1979, 80 per cent of the park’s once famous rhinos were slaughtered. Between 1984 and 1989, ivory poachers reduced the elephant population from 3,500 to just 210. The situation escalated when bandits killed two French tourists and murdered George Adamson, the man who had done so much to promote the park.

The park has been safe since the mid-1990s. Its revival can be largely credited to the building of Elsa’s Kopje, a boutique safari lodge, by the Cheli and Peacock tour company. Prior to their investment, there was government talk of de-gazetting the park and turning the fertile land into rice plantations.

Though tourism has been trickling in, it is still a relatively undiscovered place, a boon for travellers in search of a wild and empty African experience. It is unlikely you will come across any other cars, which means you and your companions are the sole witnesses to marvel at this vast wilderness.

It is overwhelming to take in that much visual beauty. It looks like high definition television. Sadly in this age of digital enhancement, we compare the reality to its likeness.

With no air pollution, the vistas are clear and it seems I can see for hundreds of miles, straight to the peak of Mount Kenya. It is incredibly peaceful. Inside the open vehicle, the crisp air hits my face, gently lulling me into a trance, with only the sighting of the animals to wake me from this state of near meditation.

For most safari goers, it will not be the first time one has seen these animals. But seeing them in situ is an entirely different experience. Details come to life, such as the deeply ingrained wrinkles on an elephant’s skin, the enormity of a hippo’s head as it opens its jaws, or the languid gait of a giraffe as it saunters through the plains.

Out here, the animals are as interested in you as you are in them. Our car drives by and a group of reticulated giraffes stops grazing to curiously observe us. Adolescent baboons in the trees start showing off, swinging and flipping from branch to branch, pausing only to watch our reaction. The leader of an elephant herd stands on guard in the distance, deliberating whether to charge.

The vehicle weaves perilously off-road and stops in the middle of the bush. Animals surround us. It is a panoramic view from every corner of the car of individual herds of buffalo, elephants and zebras drinking, eating, lolling. A flock of egrets fly overhead.

I am in the middle of my own personal National Geographic special and wonder how much our presence might be causing a disturbance in this vast prehistoric-looking part of space and time. We are the interlopers and they are just politely tolerating us.

As the sun begins to set, we return to Elsa’s and I pause to reflect on the day. It is impossible not to be acutely aware of one’s own insignificance compared with the sheer size, power and magnitude of these beasts.

As I began to ponder human beings’ evolutionary place in the world, my thoughts return to that dying lioness, the memento mori of our trip. She and her equally mature male companion are the only lions we saw on the game drive.

Though they may not have been the mighty lions we had initially hoped to see, those lions represent something much more. Their existence in this wild and remote park, brought to near desolation by humans and revived, is a story of survival and resilience. I wish I had taken her picture.

After the thrill of the safari, it is a pleasure to retreat to this cliffside sanctuary. Each of the charming Robinson Crusoe-like cottages commands spectacular views of the plains. The staff are warm and welcoming and all the small touches make a huge difference, such as being woken up pre-dawn with a tray of tea and homemade biscuits or a portable sundowner to take with you on the afternoon game drive. In the evening, while enjoying dinner al fresco, be sure to gaze up at the stars shining brightly over the empty land below. 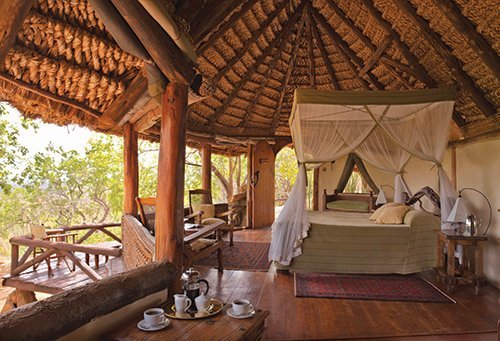 With 25 years in the business, Cheli and Peacock offers upmarket bespoke safaris for clients who want an authentic experience with knowledgeable tour guides and welcoming lodge staff.

For the full VIP “Out of Africa” experience, a private flight charter is a must, giving a viewing platform with a difference.