Global Citizen visits the Italian brand’s HQ in Florence on the occasion to mark the launch of its new perfume.

It’s a sight that has become increasingly commonplace on social media. Fashion bloggers preening about on city streets, taking selfies with their smartphones, showing off their outfits of the day, or #OOTD. However, on one sunny June day in Florence, high-street fashion was replaced with clothing from the luxury brand Salvatore Ferragamo.

Various European fashion bloggers had convened in the historic city and location of Ferragamo’s headquarters to participate in the celebration of the launch of the brand’s latest men’s fragrance, UOMO. Since it was started in 1920s by the company’s namesake Salvatore Ferragamo, a shoemaker, Ferragamo has catered to celebrities and royalty alike. But it has mostly been known for its good construction and quality, if not fashion forwardness. If the fragrance launch event was indicative of anything, millenials clad in the brand head to toe, styling it themselves with a folded pant leg or a popped collar – one could say that this conservative brand is evolving into something far more au courant as it tries to appeal to a younger demographic with its clothes, accessories and of course, fragrances.

“The essence of Ferragamo is quality and respect for the customers who wear our product. But we are always searching for newness. It’s not necessary to make a revolution. But we are always trying to do better,” says Chairman Ferruccio Ferragamo, son of Salvatore who attended the event with his teenage son.

Ben Barnes is the new face of the fragrance. The handsome English actor is perhaps best known for his role as Prince Caspian in the children’s movie series Chronicles of Narnia. In the advertisement for the fragrance, he was captured zipping around Los Angeles in an Alfa Romeo Spider, leisurely reading a newspaper at a breakfast table and smiling at the camera as he juggles an orange. The film was directed by Italian photographer Francesco Carrozzini, Vogue Italia editor-in-chief Franca Sozzani’s son and an “influencer.”

The scent itself, the heart of which is built around tiramisu, is not overtly masculine. “On the top of the olfactory brief it had to smell Italian and we wanted to create something for a man between 25-35,” says Luciano Bertinelli, CEO of Fragrance for Ferragamo perfumes.

He echoes the sentiments of the company’s Chairman, “At Ferragamo, we don’t like the word revolution we like evolution and there’s certainly been that in all of our products over the last few years. This fragrance is one of the results. Ferragamo doesn’t sell sex. We are not super fashion. We sell elegance.” 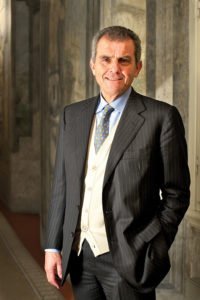 The lower floor of the company’s headquarters, the 13th century building Palazzo Spini Feroni houses Museo Ferragamo. The permanent collection contains over 10,000 models of shoes created and owned by Ferragamo from the 1920s until his death in 1960. The museum also includes films and photographs of the ambitious shoemaker catering to his celebrity clientele, Marilyn Monroe and Audrey Hepburn included. During his lifetime, Salvatore Ferragamo developed over 20,000 pairs of shoes with inventions that required 350 patents. So, in many ways, innovation and appealing to contemporary tastes is very much in tune with Salvatore’s legacy.

“My father’s left us with many values,” says Ferruccio. “It taught us that despite many difficulties, with his determination, he was still very creative.”

“The world is changing and people grow up and we need to follow new trends and markets,” adds Bertinelli. “However, we will never cut our roots, that is still fundamental to us.”