From a handcrafted bicycle wrapped in crocodile skin to an exercise-simulator machine, these are our top picks for the week

While you’ll do the ozone layer a favour by swinging a leg over a pedal-powered bicycle, there will be an animal or two that will need to lay down their lives in the process. That’s because this bespoke bicycle by Detroit-based Willamson Goods has a frame and seat that’s wrapped in either python or crocodile skin. Each cycle is hand-crafted, and the brakes, gears and cranks are adjusted to client specifications for a customised riding experience.

If you thought rock climbing on gadgets like the PlayStation was the complete daily workout you needed, you haven’t heard about Icaros yet. The German company recently debuted this gyroscopic fitness machine that’s powered by the kinetic movements of your body. Users sync their movements in tandem with the video beamed through the Samsung VR (although you can even hook up an Oculus Rift or HTC Live) headset that is shipped as part of the package. The video experience includes diving underwater, a flying simulator, parachuting, and motorcycle riding. 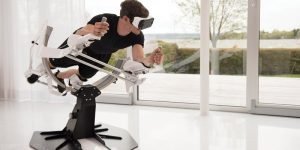 This concept was unveiled at the CES earlier this year, among many other stellar gadgets, and has not one, but three 4k screens backed up by Nvidia’s G-sync technology. Built with internal guts similar to the Razer Blade Pro, this laptop has enough processing firepower to support some serious graphics, giving the user a 180-degree view for an immersive process while at work or play. Don’t trade in your Macbook Air just yet though, this one weighs in at nearly 5.5-kgs so it isn’t exactly portable. 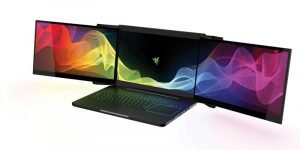