The cigar humidor is now ubiquitous with examples running from a few hundred dollars to well over a million dollars a piece. That’s the price connoisseurs are willing to pay to preserve their favourite Cuban smokes in freshly-rolled condition.

Borrowing on the idea, London-based designer Åsa Eriksson-Ahuja who owns interiors company Lotusier created the world’s first tea humidor that can protect it from moisture, heat, light and odour – any of which will alter the flavour and aroma of the tea.

It was a personal mission that encouraged her to design her first tea humidor. In 2011, she built one for her husband who was a tea collector and knew his Darjeeling first flush from Oolong. He railed that he wasn’t able to find a way to suitably store his tea. Not only did she find a solution, she also spent the last few years improving the design before offering up the first one for sale earlier this year. 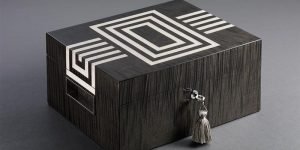 Eriksson-Ahuja handcrafted these humidors from sycamore wood because she believes that cedar wood used to make traditional cigar humidors contains a natural odour too strong for delicate teas.

Each humidor contains four-six airtight hand-blown crystal containers that store up to 70 grams of loose-leaf tea. There’s a built-in hygrometer to measure humidity within, and there’s also a two-way humidification system that allows for humidity to be added or removed from the unit.

The humidor has already been endorsed by heavyweights in the global tea business. This includes Yu Hui Tseng, a master of the Chinese Gungfu tea ceremony, and the only female among one of the top ten tea masters in the world. She owns the reputed La Maison des Trois Thés tea salon in Paris.

The Lotusier Tea Humidor costs $8,750, and for an additional amount, you can get a bespoke one as well. Eriksson-Ahuja will donate ten per cent of the sales of this product to the causes of tea plantations workers around the globe.